Based on the National Oceanic Atmospheric Administration Climate Prediction Center's outlook released this week, a strong El Niño continues to affect the U.S. as warmer than average temperatures are forecast for South Dakota and the northern states this coming winter season (December 2015 through February 2016).

“The current observations in the Pacific Ocean rank the current El Niño as the second or third strongest since 1950, and this is projected to have impacts on our wintertime climate in the U.S.  El Niño is expected to reach its peak intensity in the next two to three months,” says Laura Edwards, SDSU Extension Climate Field Specialist.

The precipitation forecast for December is leaning towards drier than average for the northern tier counties. The remainder of the state has equal chances of above, below or near average precipitation for the month.

Looking further ahead - through February - there continues to be an increased chance of warmer than average temperatures across all of the northern states, from coast to coast. 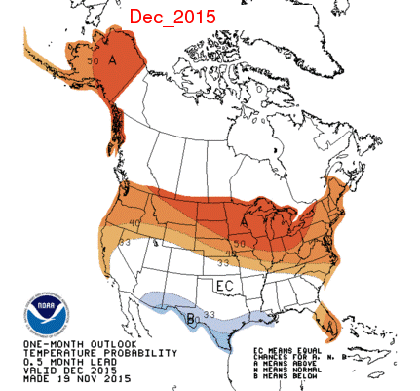 “This is consistent with a strong El Niño climate pattern that we have seen in the past, and many of the long-range computer climate models are forecasting that the same will hold true in winter of 2015-16,” says Dennis Todey, South Dakota State Climatologist & SDSU Extension Climate Specialist.

The precipitation forecast for the three months ahead sets South Dakota in between an area that is favored to be drier to our north and west, and wetter to our south in Nebraska.

“The last two winters with similar El Niño conditions were in 1982-83 and 1997-98. In both of those years, South Dakota wintertime precipitation was near to slightly below average,” he said.

Todey added that it is possible that South Dakota could experience storm events which bring rain or snow to our state this winter. "Particularly if we get a surge of moisture from the south or southwest," he said. "But it is also possible that many areas could have an open winter, with little to no snowcover for much of the season."

The implications of an open winter are both good and bad, Edwards explained. "Less snow cover could make winter wheat more susceptible to frost and freeze damage," she said. “The same situation could be positive for cattle and livestock operations who prefer drier conditions.”

Currently, the risk of major spring flooding is low.

This is due to the fact that soils are not saturated and there is some capacity to take in rain and snowmelt this winter. Also, drier than average conditions are favored upstream along the Missouri and James Rivers, and some western tributaries as well.

Edwards and Todey explained that this dry pattern in the northern Rockies and the surrounding area is also consistent with El Niño impacts in the U.S.