Cutting $100 per Acre in Corn, Soybeans

In an article posted in August, University of Illinois agricultural economist Gary Schnitkey suggested cost reductions of $100 per acre to avoid losses on 2016 corn and soybean production. The $100-per-acre reduction suggestion generated comments, questions and suggestions. In this article, responses to some of the more prevalent comments and questions are provided.

Budgets for 2016 suggest that farmers need to cut costs to avoid large losses on cash rent farmland. Table 1 shows a 2016 corn budget for farmland producing 200 bushels per acre. Gross revenue of $800 is projected, consisting of $750 of crop revenue and $50 of ARC payments. The $750 of crop revenue equals 200 bushels per acre yield times a $3.75 per bushel selling price. If $800 is the per acre gross revenue, costs must be less than $800 for the farmer to have a profit.

In Table 1, costs are ordered from the highest to lowest. Non-land costs come from 2016 Illinois Crop Budgets. Cash rent is $290 per acre, roughly the average cash rent level in 2014 and 2015 in central Illinois. The five highest costs are cash rent ($290 per acre), fertilizer ($148 per acre), seed ($124 per acre), machinery depreciation ($69 per acre) and pesticides ($60 per acre). Cash rent plus these four non-land costs account for 80% of total costs. Significant cost reductions will not occur if these items are not reduced.

Total costs are $872 per acre, $72 higher than projected revenue. Either revenue has to increase, or costs have to decrease to have positive net incomes. The $100 cost cut would leave $38 of net income to the farmer. This $38 would become less if soybeans were added into the calculations, as incomes are projected lower for soybeans. 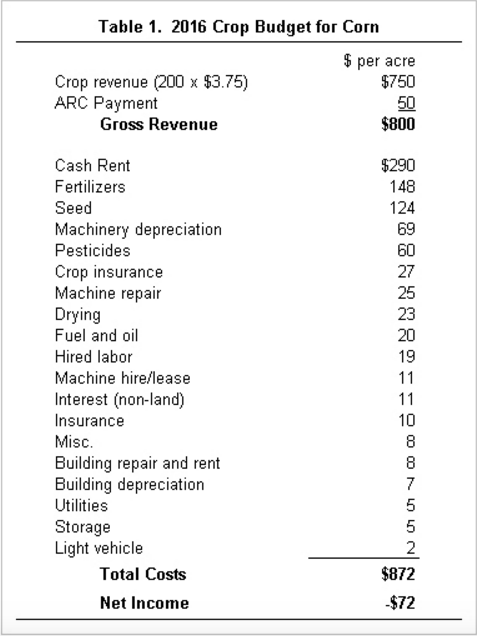 Has a $100-Per-Acre Cost Reduction Occurred in the Past?

A $100-per-acre reduction represents an 11% decrease from $872 of total costs. A yearly decrease of 11% has not occurred since 1972. However, two periods of significant cost reductions have occurred (see Figure 1):

Can $100 Per Acre of Cost Reductions Occur in One Year?

A $100 reduction in one year is historically unprecedented. However, cash grain farms likely are more "cash sensitive" now than in the past because:

To a large extent, high leverage coupled with high interest rates caused problems in the 1980s. Now the concern is predominately cash flow, particularly for those farmers with a high proportion of farmland cash-rented. Those farms with high debt levels were most vulnerable during the 1980s. Now, farms that cash-rent a high proportion of their farmland are more at risk.

Is it Possible That Cutting $100 of Costs is an Over-reaction to Current Low Prices?

Increases in corn and soybean prices would reduce the need to lower costs. However, there are three responses to the over-reaction question.

First, a $3.75 corn price currently is a reasonable expectation for sales on 2016 production. Futures markets would suggest cash prices in this range.

Second, it is quite possible that corn and soybean prices will increase for 2016 production. After all, price swings are not unusual in agriculture. However, the price increases will have to be large. The budget in Table 1 contains a $3.75 corn price resulting in $800 of gross revenue, with $50 coming from ARC payments. An increase to $4.00 per bushel would result in $800 of crop revenue (200 bushel yield x $4 price). At the same time, ARC payments likely will be $0 per acre. 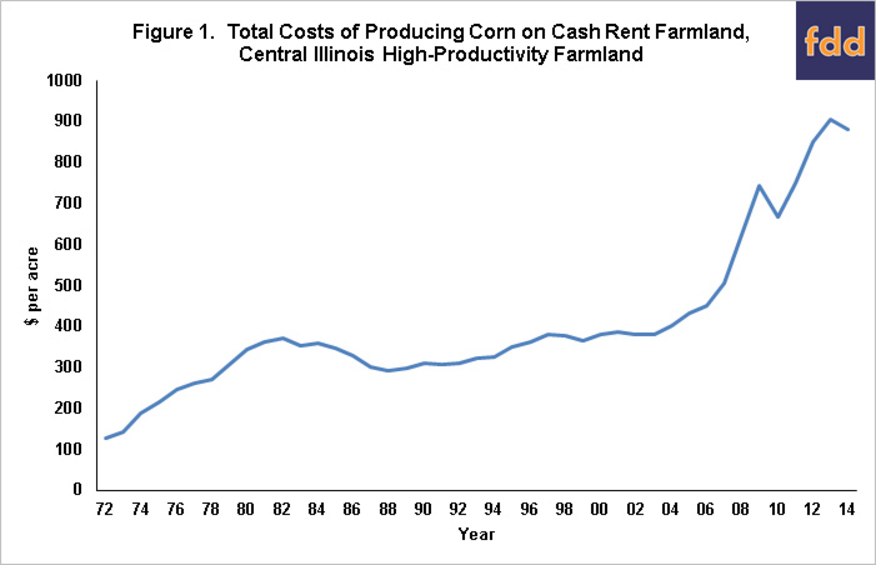 Third, prices in the $3.75 per bushel range are not new. Farmers likely averaged near $3.70 per bushel for 2014 production. Given current expectations, much of 2015 production could be sold at below $4.00 prices. Therefore, 2016 could be the third year of sub-$4.00-corn prices if corn prices remain low. Hence, cutting 2016 costs is not ahead of revenue reduction curve, but a reaction to the third year of lower prices.

Many landowners have noted that they understand the need to reduce costs, but question why those cost reductions necessarily have to come from cash rent. Many non-land costs also increased from 2006 through 2013. Why is much of the focus on cash rents?

It is true that many of the non-land costs increased, and many increased proportionately more than cash rent. The largest cost increases for corn grown in central Illinois from 2006 to 2014 were:

The extent to which non-land costs decrease likely depends on two items: 1) the ability of farmers to postpone or reduce purchases, thereby putting pressure on input suppliers to lower prices and 2) the competitiveness of firms within each agricultural supply industry. No matter what happens to non-land costs, however, sizable reductions are needed in cash rents.

Where Will Non-land Costs Occur?

The most likely decreases in non-land costs are:

What About Seed Costs?

Seed costs represent 15% of total costs and have seen large increases in recent years. Seed and genetic companies likely are very reluctant to lower seed prices. Many genetics companies are publicly traded and price reductions would result in lower incomes, potentially leading to lower stock share prices, something most shareholders do not desire. Moreover, lower prices would lower funds available to conduct research potentially leading to reduced genetic increases in the future.

How Crucial are Cost Reductions in 2016?

Many farms are financially strong and can withstand financial adversity. However, dealing with cash shortfalls now seems prudent. If costs are not cut for 2016 and low prices continue, the financial problems associated with the grain farm sector will become more difficult to deal with in the future.

Growers Could Receive $25 Per Acre Payments if Using Cover Crops