Soybean Response to Gypsum is Dependent on Soil Quality

Gypsum (CaSO4·2H2O), a soft mineral recognized today as the primary ingredient in drywall and plaster, is also one of the oldest known agricultural soil amendments. Scientists first studied and promoted “plastering” the land in the mid-1700s. Gypsum products used in agriculture commonly contain 18-23% calcium and 15-19% sulfur, small amounts of other plant nutrients like magnesium and iron, as well as trace contaminants.

In addition to its value as a fertilizer, the soluble calcium in gypsum has been shown to improve the physical structure of clay or sodic soils prone to dispersion and crusting.

Two types of agricultural gypsum are available to growers today: natural and synthetic. Natural gypsum is mined from sedimentary deposits created by the evaporation of saline water. A number of productive gypsum quarries have operated in Michigan’s Lower Peninsula over the last 150 years, mainly in Kent and Iosco counties.

A newer product to the fertilizer industry is synthetic gypsum derived from flue gas desulfurization. This process uses lime slurry to remove sulfur dioxide from the flue gases of fossil fuel power plants, yielding gypsum as a byproduct. In general, flue gas desulfurization synthetic gypsum is of greater purity than natural gypsum and is exempt from regulation as hazardous waste in Michigan, making it readily available to growers for land application.

Most soils in Michigan provide adequate amounts of calcium for soybean production and are not prone to the sort of structural instability that might call for high rates of gypsum application. However, some of Michigan’s coarse-textured soils with low potential for sulfur mineralization from organic matter may be at risk for sulfur deficiency that can limit soybean yields.

Inadequate levels of available sulfur are not only directly detrimental to soybeans, but can also inhibit uptake and utilization of nitrogen (N) by the crop due to the synergistic roles of sulfur and N in protein synthesis. Sulfur deficiency is becoming more common in U.S. agriculture due to a decrease in atmospheric deposition of sulfur from air pollution since the Clean Air Act of 1963 (once as much as 8-15 pounds per acre annually) and the removal of sulfur-containing impurities from fertilizers and pesticides.

In 2014, a SMaRT (Soybean Management and Research Technology) on-farm research project conducted in Rogers City, Mich., found that one-half ton per acre of bulk natural gypsum corrected slight sulfur and secondary N deficiency in soybean, increasing yields by an average of 6.6 bushels per acre over an untreated control. In 2015, a second SMaRT on-farm research project was conducted at a different field site in Rogers City to answer three questions that were raised by our work last year:

The field site we selected in 2015 was predominantly Omena and Hagensville fine sandy loam with a pH of 7.3 and a cation exchange capacity of 10.5 meq/100g. Gypsoil synthetic gypsum and SuperCal SO4 pelletized natural gypsum were surface broadcast just prior to soybean planting at three different rates (see table) to be compared with an untreated control. Plots were 40 feet wide (synthetic gypsum applied with lime spreader) or 60 feet wide (pelletized gypsum applied with fertilizer spreader) and 1,000 feet long. Pioneer 91M01 soybeans were drilled in rows 7.5 inches apart at 180,000 seeds per acre. 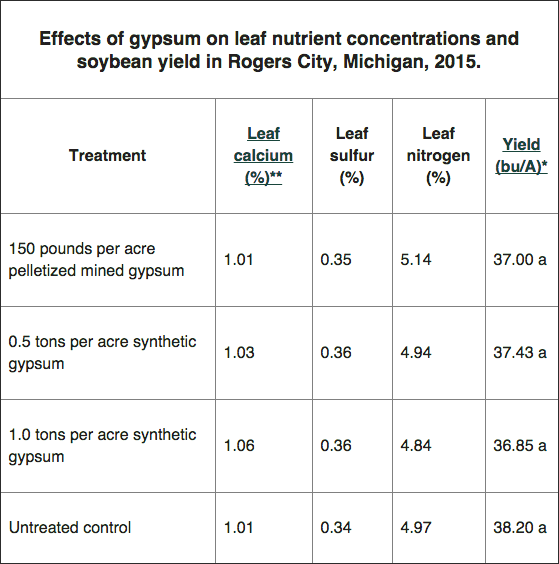 The four treatments were randomized and replicated four times. The previous crop was soybean and seed was treated with inoculant prior to planting on June 2, 2015. Uppermost fully developed trifoliate leaves were sampled July 23 for nutrient analysis and soybeans were harvested Oct. 12.

For soybean leaf tissue, the established calcium sufficiency range is 0.35-2%, 0.20-0.40% for sulfur and 4.70-6% for N. Our data indicate that all treatments, including the untreated control, provided sufficient calcium, sulfur and N for soybean production. As a result, we can conclude that gypsum application did not result in a significant yield difference in 2015.

So why the dramatic contrast compared to our 6.6-bushel-per-acre yield increase observed in 2014? The most likely explanation relates to soil quality differences between our two on-farm research sites and weather conditions experienced during the 2014 and 2015 growing seasons.

Greater than 95% of soil sulfur and N exists in organic forms. Soybean’s access to these nutrients is dependent on biological mineralization, and fixation in the case of N. Our 2014 field site had only 1.9% soil organic matter available to supply sulfur and N through mineralization. In addition, its coarser-textured soil and relatively low cation exchange capacity of 5.1 meq/100g likely limited the soil’s ability to retain mineralized sulfur and N for soybean roots to access.

In contrast, our 2015 had slightly more soil organic matter (2%) to supply sulfur and N. Soil texture was also finer, resulting in a much higher cation exchange capacity of 10.5 meq/100g and greater capacity to deliver sulfur and N to plant roots. Together, these soil quality differences created a scenario in 2015 that was less likely to result in sulfur and N deficiency than conditions in 2014. This suggests that predictions about what sites may be prone to sulfur and secondary N deficiency should be based primarily on measures of soil quality.

Another difference between the 2 years of our study was weather, particularly temperature. Growing degree day accumulation (GDD base 50 degrees F) between June 1 and Nov. 1, 2014, was 13% below the 5-year average according to the Hawks, Mich. Enviro-weather station. On the other hand, 2015 was fairly warm and GDD accumulation was slightly above average. Temperature differences between our 2 years of research may have compounded the soil quality differences between our two sites, slowing nutrient mineralization in 2014 and contributing to deficiency.

You may be left asking if differences between the natural and synthetic gypsum products used in our studies, their purity or concentration of nutrients other than calcium and sulfur played any part. Tissue analysis indicated that all other nutrients were present in sufficient quantities across both years and all treatments. This suggests that the differences in soil quality and temperature noted above, not the source of gypsum used, drove the yield responses we observed.

Know Your Soils, Improve Their Quality to Help Soybean Fertility