Nov. 3, 2015 — Several farmers and stakeholders heavily involved in conservation agriculture were honored recently as “White House Champions of Change for Sustainable and Climate-Smart Agriculture” during a ceremony on Oct. 26 at the White House.

Among those honored were Nebraska farmers Keith and Brian Berns of Bladen, Neb., co-owners and operators of Providence Farms — a 2,000-acre diversified family farm — and Green Cover Seed, a leading provider of cover crop information and seed.

The company has grown from supplying seed and information for 1,000 acres of cover crops in 2009 to over 500,000 acres in 2015. The company also created its SmartMix Calculator for planning and designing cover-crop mixes. The Bernses also educate farmers and ranchers about the importance of soil health and carbon sequestration through numerous field days, workshops and conferences.

“Our connection to the land runs deep as we have been farmers all of our life, but only recently have we begun to understand the complexity of the soil ecosystem and the promise that it holds for better crops, healthier food, and a more stable environment,” Keith Berns says in a statement. “Through no-till farming, crop diversity and living cover crops, we’re storing and building our soil carbon levels by removing CO2 from the atmosphere and putting it into the soil where it becomes the currency for a wonderfully complex economy of plants and soil microorganisms.” 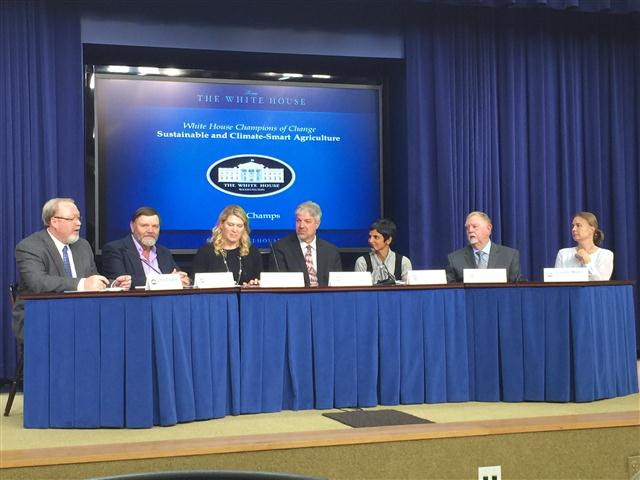 Keith Burns (center) and several other stakeholders in agriculture, honored as White House Champions of Change for Sustainable and Climate-Smart Agriculture, speak at the White House last month.

The Soil Health Partnership and Iowa Soybean Association both nominated Smith for the award.

“American agriculture is more advanced and efficient than ever, but making deeper changes in the business of farming will enable us do even better for long-term sustainability,” Smith said. “Losing precious soil is not sustainable. Farmers are becoming more aware of this and the impact it has.”

Smith farms near Eagle Grove, Iowa, in the Boone River Watershed. In 2011, he signed up for a federal program that identified the watershed as a priority for reducing nitrate and phosphorous levels in the Gulf of Mexico.

In 2014, he joined the newly formed Soil Health Partnership, which over a 5-year period will identify, test and measure farm management practices that improve soil health and benefit farmers.

The practices Smith has changed on his farm include:

Smith tells other farmers that it’s not hard to change practices. He shows photos of his father using a moldboard plow years ago, saying at one time, “…we thought we couldn’t farm without a plow. Change is nothing to fear. Farming practices have always evolved, and will continue evolving.”

To further honor the honorees and their work in sustainable agriculture, cover crops were to be planted in the White House Kitchen Garden to “improve soil quality, reduce erosion and increase soil carbon.”

The Champions of Change program was created as an opportunity for the White House to feature individuals who are doing extraordinary things to inspire and empower members of their communities.

For more information on all of the honorees, go to www.whitehouse.gov/champions.