Even without the support of his farming family or experience with no-till, Matthew Undlin made up his mind he wanted to give no-till practices a try.

When he started farming 1,600 acres on his own 10 years ago, Undlin was determined to implement no-till practices from the start. It was a big move away from the traditional tillage practices he learned about growing up on his family’s farm near Lansford, N.D..

Undlin knew he didn’t have to worry about paying for a cultivator, harrow or disc, and was pretty certain his bottom line would benefit from low input costs. But would crop yields be satisfactory?

“Since 2005 I’ve done everything I can to improve my efficiency, looking to best myself every year,” Undlin says. “The result is overall crop yield increases, with as much as a 200% bushel-per-acre increase in my wheat. My 5-year wheat yield average is 75 bushel per acre.”

By “everything” Undlin means searching out the best crop variety to suit his operation, using a strategic fertility plan, selecting planting equipment that meets his specific planting needs and incorporating cover crops and cattle into his no-till system.

He even uses a closed-circuit camera in the tractor cab so he can watch what’s actually happening during planting. 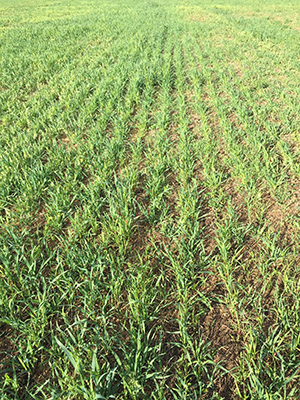 Lansford, N.D., no-tiller Matthew Undlin makes every effort to keep a living root in the ground as many days as possible. This cover crop was planted into pea stubble immediately following harvest.

When it comes to wheat, Undlin believes choosing the right variety is an important factor in his consistent yield results. He doesn’t’ select a variety solely based on one element, but considers a combination of variety traits.

“Corn and soybean variety booklets have a chart that indicates which variety works best in different situations, like no-till or drought,” Undlin says. “Wheat growers don’t have that kind of variety direction.

“For most wheat farmers, variety selection is a trial-and-error process. In my wheat, it’s important to have a variety that’s vigorous when it emerges. Because my soil organic matter levels range from 3.8% to 4.5%, I can select a lower-protein variety and still achieve the 14% protein standard at harvest.”

Undlin uses a John Deere 1890 air-disc drill to plant wheat. Over the years, he’s modified the drill based on results of several test plantings to see what improved seed-to-soil contact.

His experiments included modifying different sections of the disc openers and closing wheels in different ways, and using the closed-circuit camera to view the actual results of each modification. The information allowed him to fine tune the drill to achieve the best possible emergence.

The camera also revealed that drill speed, and the moisture levels of crop residue, had an important impact on satisfactory seed placement and depth.

“We suspected that driving too fast with the drill caused dirt to fly around and interfere with seed placement,” Undlin says. “The camera confirmed that. Using the camera, we could also see that wet stubble caused hairpinning that wasn’t visible from the tractor cab.”

Undlin has also run the camera inside the air-drill tanks so he knows when seed is running low and is certain that he doesn’t have faulty sensors in the tanks.

“We haven’t run the camera in our combine yet, but that’s probably the next step,” he says. 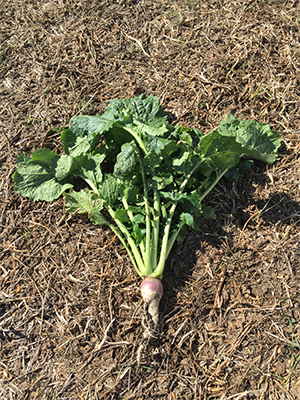 This purple top turnip is one of the annuals usually included in Undlin’s cover crop mixes. In addition to making a good livestock grazing product, the turnips aid in relieving compaction, improving moisture absorption and building soil organic matter.

For wheat fertility, Undlin uses 11-52-0 dry fertilizer with high phosphorus content. He also places ESN polymer-coated nitrogen in the seedbed and spreads urea (46-0-0) on the ground either pre- or post-emergence.

At the five-leaf stage, ammonium thiosulfate and 28% are top-dressed. Undlin believes this fertility strategy supports the wheat’s protein content and overall yield.

All Undlin’s fertilizer is placed at a variable rate based on annual zone sampling in each field. He’s found that the variable-rate fertilizing technology doesn’t lower his fertilizer bill.

“Some places in the field require 500 pounds of fertilizer, other’s don’t require any. That’s the result of years of poor phosphorus management,” he says. “But the payoff in variable-rate fertilizer shows up in our wheat yield-to-input ratio.

“We’re not putting fertilizer on a sandy ridge where yield is generally low. We’re maximizing yield on the best yielding areas and seeing as much as 130 bushel wheat per acre in those spots.” 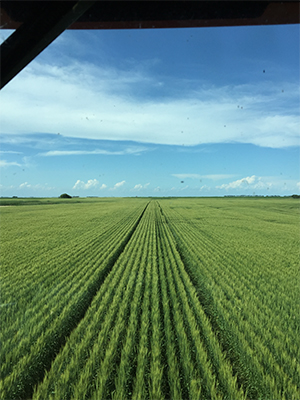 A view of Undlin’s hard red spring wheat crop as he applies fungicide. Undlin says he doesn’t’ select a variety solely based on one element, but considers a combination of variety traits. “In my wheat, it’s important to have a variety that’s vigorous when it emerges,” he says. “Because my soil organic-matter levels range from 3.8% to 4.5%, I can select a lower-protein variety and still achieve the 14% protein standard at harvest.”

Undlin suspects growing up on a ranch, where his parents had a cow-calf operation, gave him an appreciation of keeping something green on the land as many months as possible.

Wherever the inspiration originated, his desire to integrate cover crops into his farming operation is paying off.

“All my wheat is raised for seed,” Undlin says. “One of the requirements for that is to have 2 years between wheat crops. The day that we harvest wheat, we’re in the field with the drill to plant a cover.”

In order to be ready to plant covers, he has to get the drill ready ahead of time, so before harvest starts the machine is ready to hitch and pull to the field.

Before settling on his drill to plant cover crops, Undlin experimented with flying on the seed, using a fertilizer spreader to place seed in the fall, and a “floater” to broadcast seed into standing wheat. The drill has given Undlin the most satisfactory seed-to-soil contact and emergence.

“My cover crop performance isn’t the same every year,” Undlin says. “One field this year is much slower growing that I expected. I’m not sure why. That doesn’t mean I’ll stop using cover crops. I’ll keep experimenting to find out what is most successful and to keep a living root in the ground. It’s important to me to do everything I can to maximize soil quality.”

Some cover-crop mixes are designed to accommodate grazing, and Undlin admits if he had enough cattle he’d graze them all. He sees multiple benefits in using the cover crops in combination with the cattle, including accelerated mineralization of soil nutrients.

“I have a field that was in the Conservation Reserve Program for 20 years,” he says. “Soil tests show a high level of nutrients in that soil, but for some reason those nutrients aren’t mineralizing very quickly.

“Using turnips and radishes in the cover-crop mix helps, but it seems the deposit of the cattle manure really speeds up that process. It’s one of the major reasons I graze cover crops and bring neighbors’ cattle in to graze some of them.”

This fall, Undlin’s 40-head herd of cattle will graze a mix of turnips, radishes, chicory, Ethiopian kale, Siberian millet, sudangrass, oats and crimson clover. All the plant species are annuals, which are hardy down to 20 F.

Unless heavy snow falls, Undlin will graze the pasture from Nov. 1 until February. Because none of the cover-crop plants will start growing again in spring, Undlin will plant both corn and canola into the cover-crop residue after applying a pre- and post-emergent weed control herbicide.

For several consecutive years, Undlin’s area has seen excessive rains, with as much as 20 inches that fell there in May 2011. In spite of the heavy rain, Undlin has not experienced any erosion or prevented-planting situations.

“In May 2011 it rained so many days in a row that we didn’t get everything planted in the 10-day window we finally had,” he says. “With the heavy rains we’re getting now, we don’t have standing water because the rain soaks in.

“In the years that I started farming and using 100% no-till, the weather was near perfect and I didn’t experience any significant planting or yield issues,” he adds. “That may not always be the case for others. I believe my success has come from ongoing learning and willingness to find out what works best for me.

“That’s a practice I’ll keep using, too. I’m a fifth generation grain farmer and would like to see the land in better shape than I got it and to leave the land to the next generation in maximum growing potential.”