Use Seed Size for a Better Seeding Rate

Wheat seeding rate recommendations in Kansas are often stated in terms of pounds of seed per acre, and vary according to precipitation zone. However, seed size can have an impact in the final number of seeds actually planted per acre.

A variety with larger kernels, when planted according to pounds per acre recommendations, will result in fewer seeds planted per acre and thinner stands than a variety with smaller kernels. As a result, if the weather and fertility during the growing season are not favorable for tiller formation and survival, grain yields may be reduced due to the resultant thinner stand.

On the other extreme, a variety with small kernels planted according to pounds per acre recommendations can result in above-optimal stand establishment, increasing plant-to-plant competition for available resources such as water, nutrients and incident solar radiation.

Another advantage of planting in terms of seeds per acre rather than pounds per acre is that seed costs can be reduced for varieties with a small kernel size when wheat kernel size.

Although seed size is specific to each individual wheat variety, it can vary within variety depending on seed lot and seed cleaning process. Figure 1 shows three different wheat varieties and, for each variety, seed size as affected by seed cleaning method. For this simple study, the varieties Everest, WB-Grainfield, and SY Wolf were evaluated at different times during the seed cleaning process: “Unclean” (harvested seed before cleaning), “Air screened” (seed following air cleaning or the blower), “Mid gravity” (seed from the low end of the gravity table), and “Top gravity” (the seed from the top end of the gravity table). 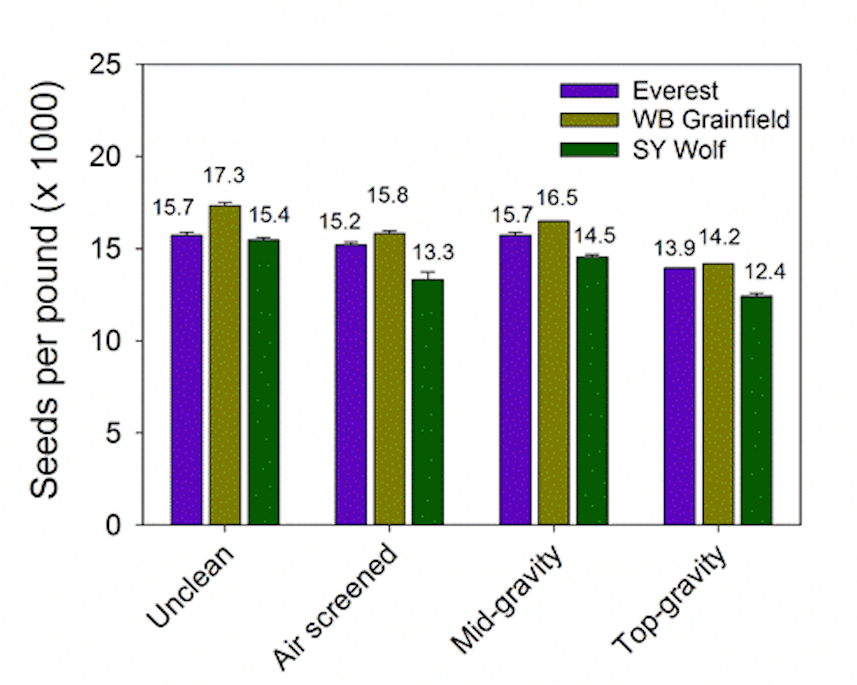 The two most contrasting treatments from the above study, the “Unclean” WB-Grainfield (top figure, 17,335 seeds per pound) vs. the “Top-gravity” SY Wolf (bottom figure, 12,427 seeds per pound) are shown in Figure 2. To achieve the same number of seeds per acre at seeding, “Top-gravity” SY Wolf would require a 39% increase in pounds per acre planted when compared to “Unclean” WB-Grainfield.

If the goal was to achieve 1.2 million planted seeds per acre, wheat would be over-seeded at about 8% for the smaller seed and under-seeded in about 22.5% for the larger seed when using a seeding rate of 75 pounds per acre for both. This assumes the same emergence rate for the cleaned and uncleaned seed, which would not necessarily be expected.

These results highlight the importance of measuring wheat seed size before planting to ensure the final amount of seeds planted per acre will be close to the original target.

Certified seed, or seed submitted for germination testing, will have seeds-per-pound information available. However, an easy on-farm method to estimate the average seed weight of a seed lot is to collect several representative 100-seed samples and weigh each 100-seed sample in grams. 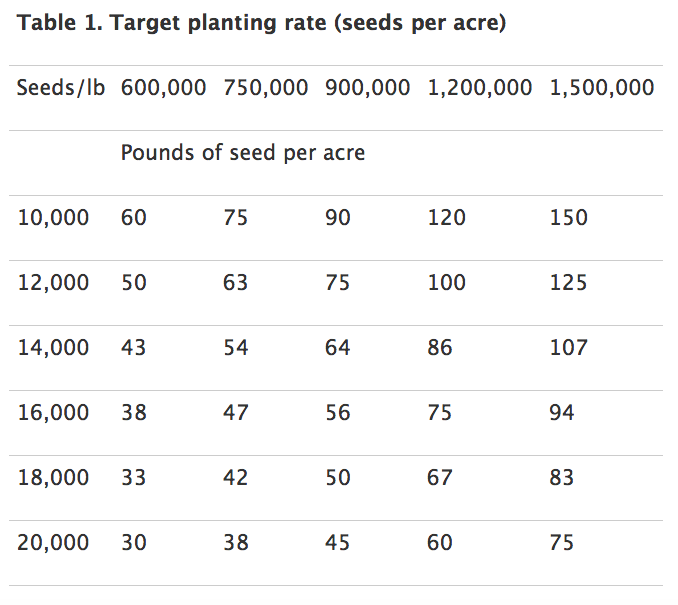 How to Use Table 1

In this case, both seed lots were in the “normal” range of about 14,000-16,000 seeds per pound, and a simple ±10% adjustment on the seeding rate should compensate for differences in seed size.