Wheat Disease Implications for Crop Rotations that No-Tillers Should Consider

The weather changed from one extreme to another. First it was dry and then it was wet with some areas experiencing extremely heavy rains and strong winds.

Consequently the 2015 wheat crop is coming in with mixed reviews. Some areas are seeing higher than normal levels of ergot and Fusarium head blight (FHB).

This may have implications for producers with regard to their planned crop rotation. Many farmers in central and western South Dakota manage their crop land under a no-till crop production system.

No-till is successful when it includes diverse crop rotations. A popular crop rotation or sequence in central South Dakota is spring wheat-winter wheat-corn-sunflowers.

However if the spring wheat in this crop rotation had significant levels of ergot in it this year, producers may need to change their plan and plant that field to something other than winter wheat. 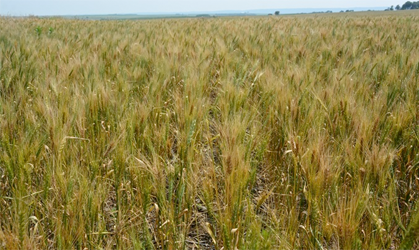 Planting wheat back into wheat residue from a crop that hosted ergot this year may not be a wise option. Producers may need to stray from their planned rotation to avoid this situation.

Ergot bodies that drop from the wheat heads can remain viable in the field for about 1 year. If climatic conditions exist next year that favor ergot development, the 2016 crop may face an increased chance of being contaminated, especially in situations where it was seeded into residue that had ergot.

Fusarium head blight (FHB) also showed up this year in some wheat-producing areas of South Dakota. Fusarium is one of the fungi that breaks down corn stalks after harvest, so it’s important that no-tillers avoid planting wheat into old corn residue whenever possible.

The rotation listed above includes 3 years of Fusarium-susceptible crops. This is a concern associated with this popular rotation. Several other diseases such as tan spot, Stagonospora/Septoria blotch, powdery mildew, are residue-borne. So planting wheat after a broadleaf crop will reduce the inoculum of these diseases as well.

The incidence of ergot and FHB increases when the weather is warm and moist during the period when wheat is flowering, so increased incidence of these diseases next year will depend on climatic conditions during flowering. However avoiding situations that provide opportunities for these diseases under the right conditions can help wheat growers to produce a healthy crop.

If producers do not want to adjust their crop rotation, then it will be more important than ever for them to thoroughly scout those crops during the growing season. FHB may be minimized with timely application of a fungicide. Ergot, on the other hand, has few in-season control options once it is detected. Other crop options such as field peas, lentils, oats, milo or annual forages may need to be considered.

For more information on no till crop production visit the Dakota Lakes Research Farm and South Dakota No-Till Association websites.