Zachary Cordel, a transplanted Kansan, says he appreciates the merits of no-tilling after relocating to eastern New Mexico, where he’s part of the family running the 4,000-head Heritage Dairy and a large farming operation associated with it. The blow-prone soils in the region require close attention to keeping cover on the soil, as wheat, haygrazer and residue from corn and grain sorghum are becoming important tools.

Zachary Cordel already appreciated no-tilling from his days on the farm with his father in Cocker City, Kan., north of Salina.

During the 5 years Zachary spent at college, and a subsequent 2 years of missionary work, his father went from tilling fields on their farm to becoming excited about conservation and stewarding the land, and he’s now no-tilled for 12 years.

But when Zachary came to a family dairy farm near Clovis, N.M., in 2010 by way of marriage to his wife Rachel, the soils, climate, and cropping told him he wasn’t in Kansas any more.

"Our Kansas crops were wheat on half the farm, and grain sorghum and soybeans on the rest. Our biggest equipment was a no-till drill and pull-type sprayer," Cordel says.

While silty loams were primary soils in Kansas, clay loams and sandy clay loams dominate in the Clovis area. Cordel tasked himself with incorporating no-till at Heritage Dairy, a 4,000-head dairy and farming operation on both irrigated and dryland farms.

Availability of irrigation can be a limiting factor on yields. About 10% of the farm is dryland, but that acreage will grow crops.

Cordel says he’s blessed with a mentor in Nick Pipkin, a lifelong resident and farmer in the Clovis region who lives just across the state line at Farwell, Texas. Pipkin serves as farm manager for Heritage Dairy after selling his own farming interests north of Clovis to dairies.

"We’re dipping into no-tilling with the dairy now and testing how it will work here in eastern New Mexico. I have really liked what I have seen of no-tilling so far," Cordel says. 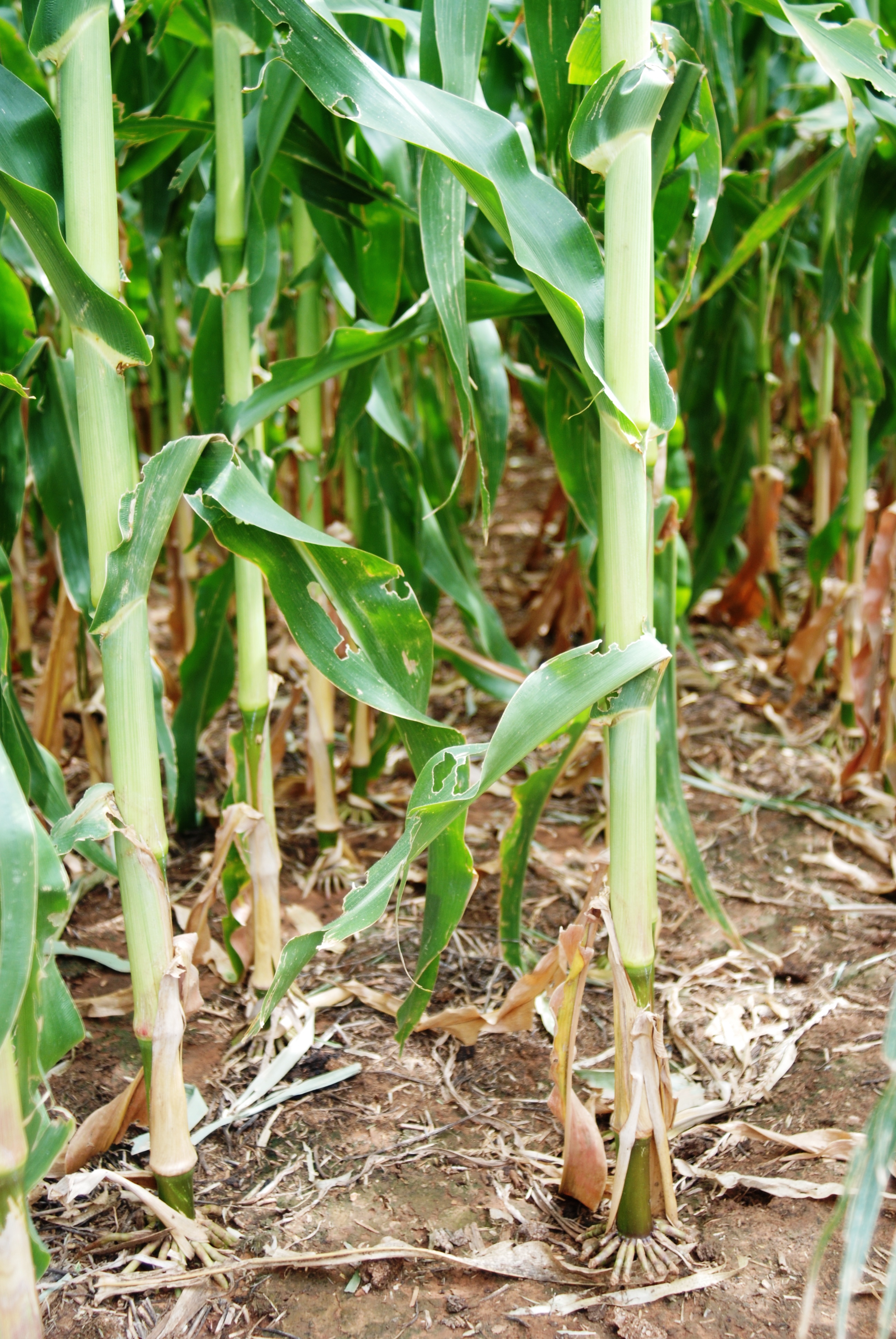 Closely spaced 15-inch corn rows are shown in one of the fields farmed by Heritage Dairy of Clovis, N.M. Excellent summer rainfall in the region boosted prospects for both irrigated and dryland corn, and the ability of the narrow row corn to quickly canopy over and shade out weeds has proved an advantage.

Crops include corn for ensilage and grain, grain sorghum, sorghum silage, haygrazer for hay and chopping, as well as wheat, oats, triticale, canola, and even some cotton.

"We have most of our no-till opportunities on the grain side,” Cordel says. “We can no-till a lot of grain sorghum or corn into standing wheat stubble. Even where we swath or green chop wheat, we let the wheat regrow and then follow up with corn or grain sorghum planted into the terminated regrowth.”

Pipkin says cover must be left on dryland acres or the land suffers from wind erosion — a challenge when harvesting all but a scant stalk of forages and hay for the dairy leaves very little standing cover.

When harvesting feed for the dairy it’s common to take almost the entire crop, which can leave land prone to blow. But Pipkin says they quit plowing on dryland acres and try not to compact the soil with trucks hauling ensilage.

“Whatever stubble remains, we leave and spray for weed control. After chopping silage we try to get right back in the stubble with a wheat crop within four days, so that the ground doesn’t bake,” he says.

Because they’re mindful of compaction, Pipkin says they don’t need a no-till drill, but use Great Plains and Landoll drills with factory opening discs on 7½ spacings, as well as factory press wheels to plant small grains and hay. 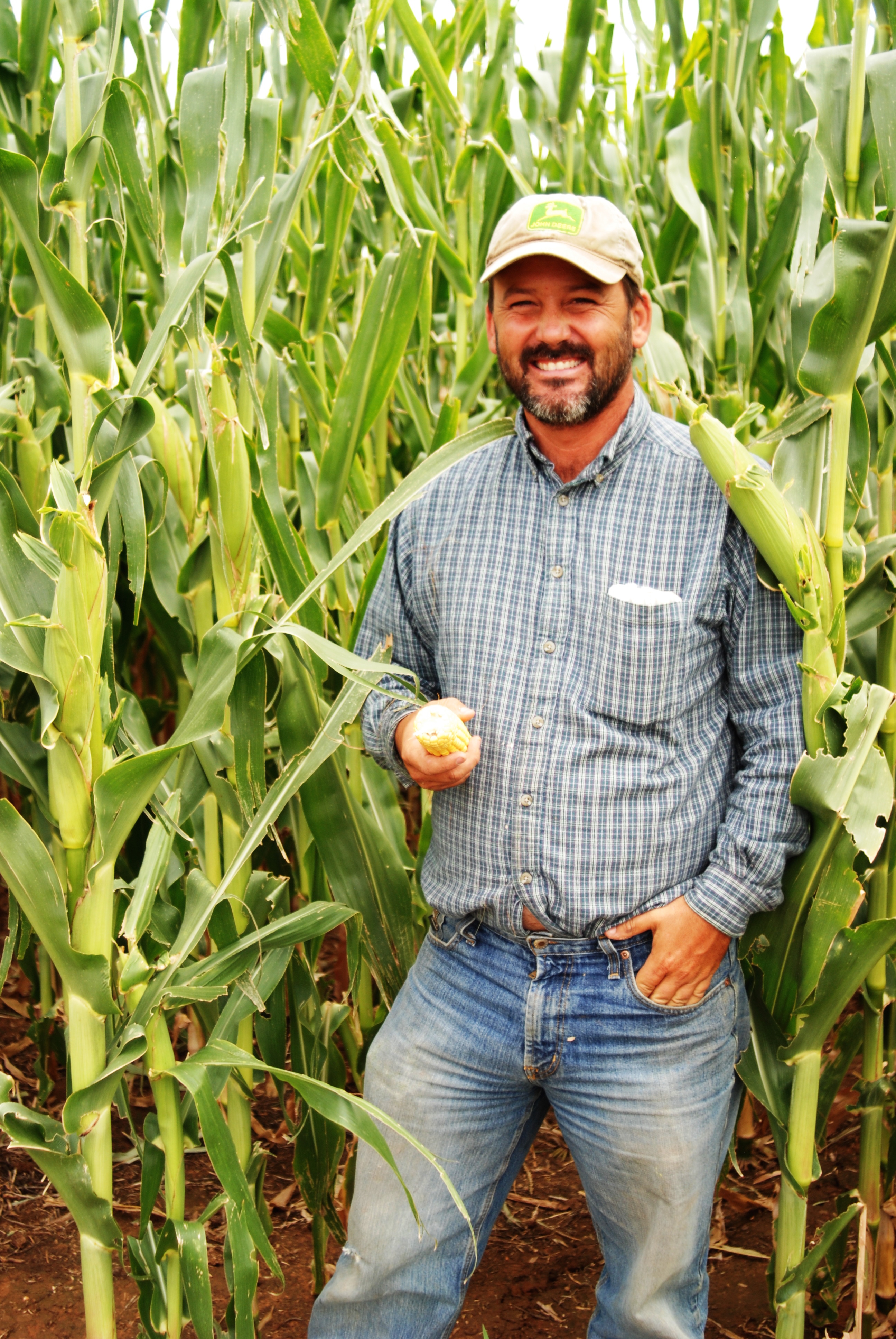 “Both drills have pneumatic down pressure so that the drills stay in ground," Pipkin says.

Where sprinkler irrigation is available, they water up wheat planted after corn or sorghum silage to get it large enough to hold the soil through the winter months. They’ve also overplanted thin stands of grass with oats drilled for a hay crop.

"Haygrazer is as good a dryland crop as we can grow for the dairy in this area,” Pipkin says. “With moderate rainfall it will make 10.5 to 11 tons per acre for green chop, and you may get another cutting if the moisture comes right.”

Last year, with far less rain than they received this year, Pipkin and Cordel chopped 6 tons per acre and then came back and made two 1,200-pound round bales of hay per acre.

"Everything you do in dryland farming either makes you look like a rocket scientist or incompetent. The moisture that falls in a growing season is the big determining factor," Pipkin says.

A John Deere 4930 self-propelled sprayer with 120-foot boom is used in applying a wide array of herbicides. With cotton acreage minimal and grain and forage crops rotated constantly, Cordel says they haven’t had big problems with glyphosate-resistant weeds.

A tankmix of Ally and 2,4-D applied in green wheat last April, "saved us at least 3 weeks and a spraying," Cordel says.

Following wheat harvest, stubble is left fallow for 10 months, with one or two applications of Roundup and Clarity to burn down weeds. One spraying is timed near the frost date.

Farm acres are spread with manure from the dairy, primarily on wheat stubble. Here, too, consideration is given to no-tilling and minimizing compaction.

They come into stubble behind ensilage chopping or hay cutting and spread 10 tons of manure per acre. Using manure adds a challenge to no-till, but also helps to build the soil, they’ve found.

They use a JBS 30-ton spreader that scatters manure vertically rather than horizontally. Pipkin says the dairy initially hired out manure spreading and the contractor had a JBS spreader. Upon observing that the spreading job was far more uniform, they purchased a JBS for use in their farming. 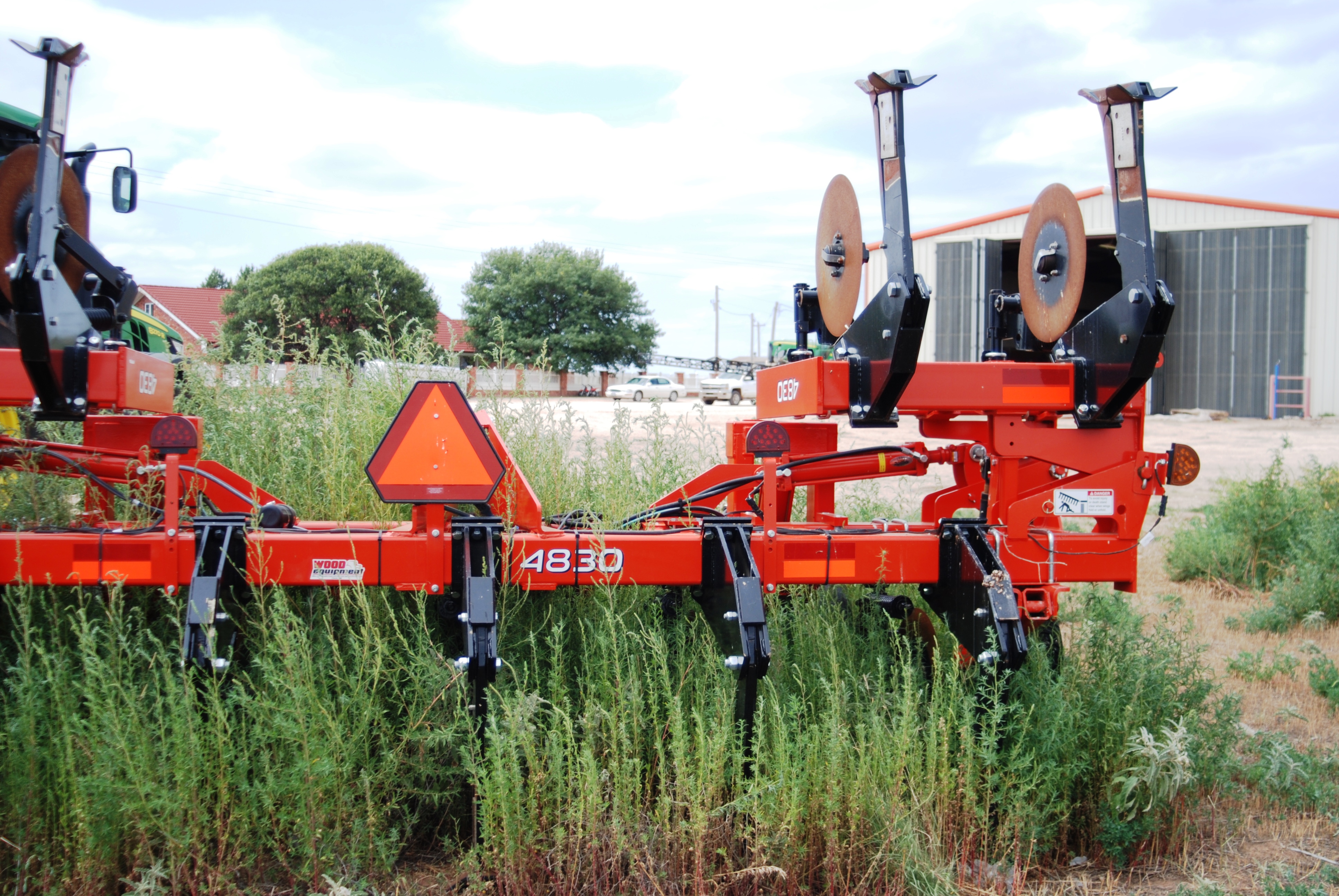 A Krause 4830 no-till ripper awaits a call to duty in dealing with compaction caused by trucks during harvest season. Heritage Dairy runs the rig over wheat stubble after manure has been applied with a vertical spreader. The 20-foot Krause implement has shanks on 30-inch centers, with smooth coulters and 8- inch wings that run to a 19-inch depth.

Pipkin says the tractor mount with the JBS spreader gives better control at a constant speed, and the GPS unit on the tractor ensures even spreading. Nearly all of their no-till work is done with John Deere 8270R row-crop tractors.

“The JBS spreader pulverizes manure into fine particles and spreads it more evenly. We can use tractors, rather than trucks, to do the spreading and space out the spreader track intervals to every 24 feet, instead of every 12,” Pipkin says. “That really helps with soil compaction.

A 20-foot Krause 4830 no-till ripper is used following the spreading of manure on wheat stubble. The rig has a 1½inch wide shank with a smooth coulter running in front of it every 30 inches. The tool also has 8-inch shattering wings to break up compacted soil layers about 19 inches below the soil surface, while leaving crop residue and topsoil minimally disturbed, Cordel says.

Cordel notes that on dryland acres, they don’t use a lot of fertility. They soil sample every year to track manure applications and monitor the level of organic matter indicated in soil samples.

“It’s not something that you can change fast, but it makes a difference,” Cordel says. “We saw an excellent demonstration at No Till on the Plains that showed how organic matter impacts water-infiltration capacity.

“Our crucial time for moisture for forage is March. Even when a sprinkler went down last year, on a field with the highest organic matter on the farm — 2.6% — we still got the best wheat yield of any of our fields because of all the moisture the soil retained due to the higher organic content.”

Cordel and Pipkin say they sampled a field this year that showed 2.8% soil organic matter.

Dryland corn production is proving a viable option for the dairy. Abundant rainfall this summer has the 2015 dryland corn crop looking exceptional for the region.

Corn and grain sorghum are planted with a DB-60 60-foot planter covering 42 15-inch rows. They also use a 40-foot John Deere 1790 planter that they say is especially good at penetrating hard ground. Both units have pneumatic down pressure. Although they don’t consider these no-till units, they focus on keeping opening discs sharp to penetrate stubble and hard soil. 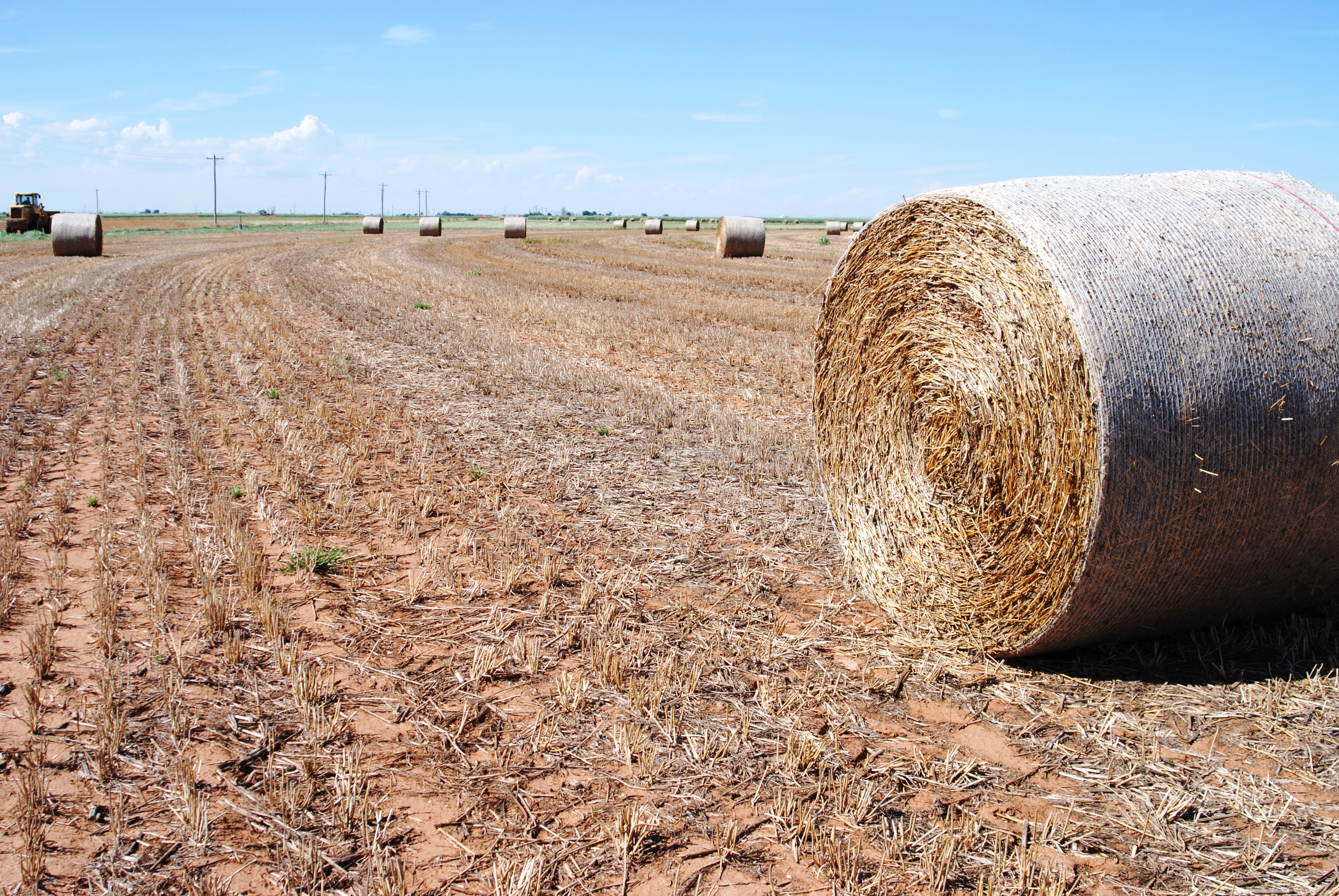 With great emphasis placed on harvesting the maximum amount of hay, ensilage and other forage at Heritage Dairy, the dairy’s farm manager, Nick Pipkin, is constantly looking for ways to retain as much residue as possible in order to hold blow-prone soils. One tactic is to let wheat regrow after green chopping, then terminate the standing crop with herbicide before planting a follow-up grain crop that gets the soil covered rapidly.

"We like 15-inch rows, even on dryland. We’ve found the plants canopy the ground quickly, cool the soil, and shade out weed competition. It’s amazing what we’re shading," Pipkin says.

With so much silage and hay to harvest, and stubble fields in need of quick cover planting behind the chopper, there’s little idle time once forage and hay harvesting begins. 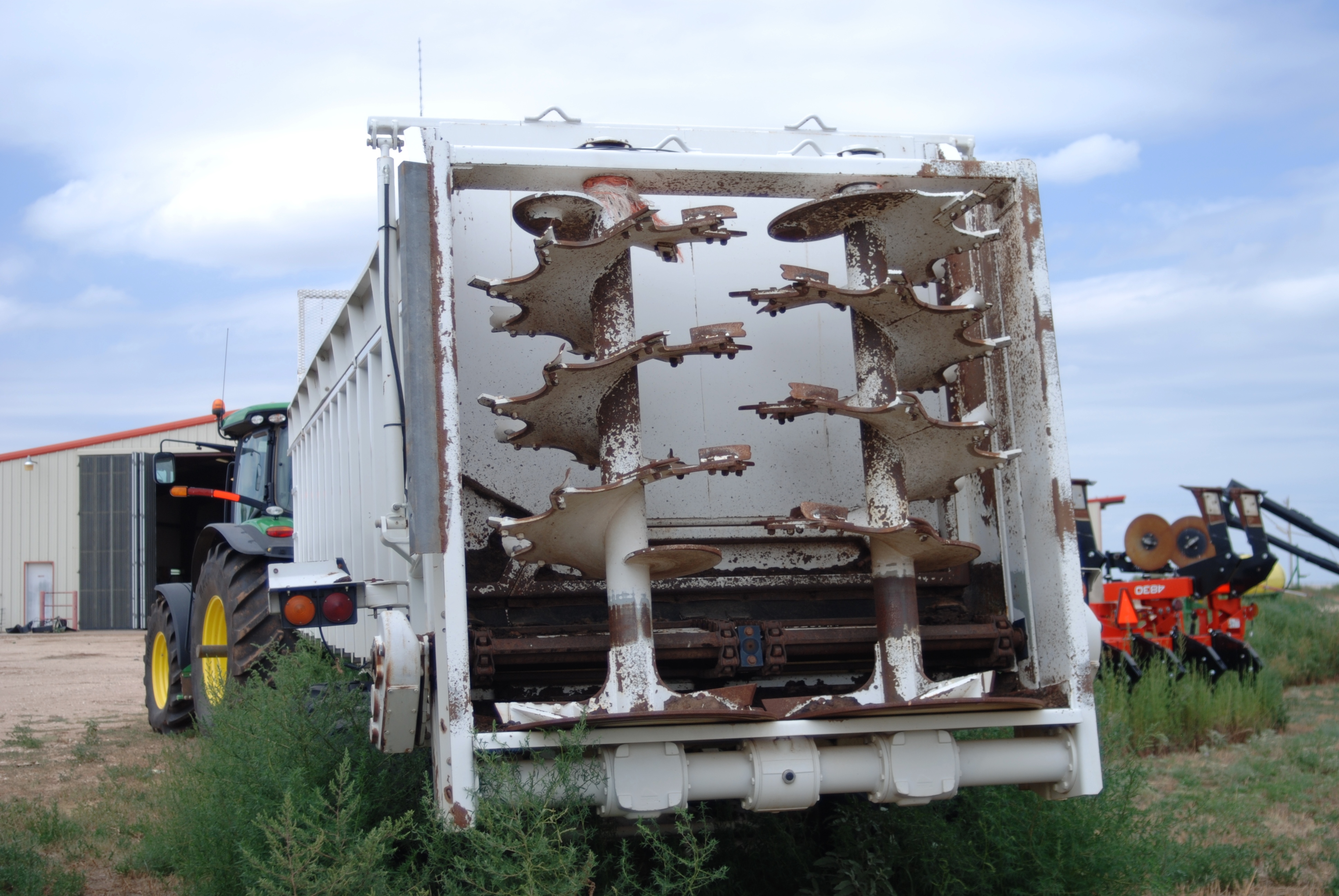 This 30-ton-capacity JBS vertical manure spreader is an important tool in enhancing soil organic matter on farmland associated with Heritage Dairy. Pulled at a ground speed of about 6 mph, the unit spins out manure broken into finer particles than horizontal units on trucks are capable of delivering. Farm operators appreciate that tractor tracks are spread out to intervals of 24 feet, rather than the 12 feet of manure trucks, diminishing soil compaction.

"We can have a big game plan for no-till, but if fields are wet at harvest time and we have to pull silage trucks through the field it can be a game changer,” Pipkin says. “Still, we try to no-till all we can as determined by moisture. If we get August rain, we plant wheat, if moisture comes in February, we sow oats.”

Pipkin notes that they always grapple with the question of what to plant on dryland acres. They’re looking at using more grain forage to keep cover on the land, since in dairy farming they’re taking so much cover off and potentially having soil blow.

“We find that with grain on dryland acres we have some quality cover. We plant wheat right into the grain crop stubble. Running the drill with the rows works better. We can plant wheat as late as Nov.1 but prefer to do it earlier, and mid-October planting is best for triticale for silage. Our philosophy is to have the ground ready to go so that when it rains we’re not behind. The key is getting crops up and the ground covered.”

Sell The Plows, Selling Out To No-Till

Succeeding at No-Till Without ‘Chasing Acres’

Getting Ahead of the Dryland Curve with No-Till