Net incomes are projected to be very low for 2015 (farmdoc daily July 28, 2015). For low incomes to not repeat in 2016, commodity prices must increase or costs must decrease.

At this point, counting on price increases seems imprudent. As a result, substantial cost cuts will need to occur to have positive incomes in 2016. In this article, cost decreases of $100 from costs contained in 2016 budgets are illustrated for cash rent farmland.

Non-land costs are projected at $585 per acre for corn and $361 per acre for soybeans (see Table 1). Non-land costs are based on historically observed costs on grain farms enrolled in Illinois Farm Business Farm Management (FBFM), adjusted slightly downward due to changes in input prices (See Revenue and Costs publication for more detail). Cash rent is $236 per acre, near the average for this productivity of farmland. 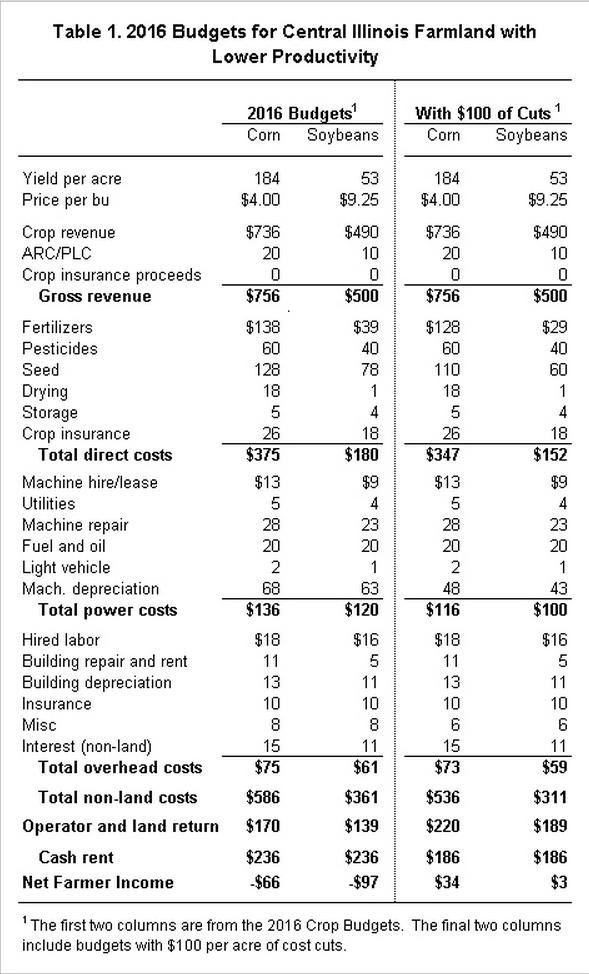 Given revenues shown in these budgets, costs must be reduced to have positive returns. Cost cuts of $100 per acre will be used at the target. Cuts of $100 per acre would result in $19 per acre of net farmer income, levels that are relatively low and do not provide much margin. A $100 cost cut implies total cost reductions of 12% for corn and 17% for soybeans. These are very large cost reductions.

Cost cuts of $100 can be achieved in a variety of ways. Reductions in the second two columns include:

Higher commodity prices could have the same impact on net farm income as cost reductions. A corn price of $4.65 for corn and $10.75 for soybeans results in the same income as $100 in cuts. The $4.65 corn price and $10.75 soybean price are close to projections of the long-run averages (farmdoc daily Feb. 27, 2013). At these prices, income would be $19 per acre, a relatively low level, suggesting that costs need to be reduced even if prices approach projected long-run averages.

What Would Net Income be at Current 2016 Fall Grain Bids?

At this point, relatively large cost cuts need to occur before positive incomes in 2016 budgets. Even with $100 per acre of cost reductions, incomes would be negative at current 2016 fall delivery prices. Even likely long-run averages prices result in low incomes without substantial cuts in costs.

Where cost cuts occur are an open question. In this article, one division of cost reductions are presented. If non-land costs are to decrease by a significant amount, cost reductions must occur from fertilizer, seed, pesticides, and machinery depreciation.

Obviously, large cuts in costs will be difficult. However, profitability in 2016 likely depends on making these cost cuts.

Corn Diseases to Watch for in 2016

Watch for Burcucumber and Toothed Spurge in 2015 Corn, Soybeans