Risk of Nitrogen Leaching in Nebraska

Nitrogen (N) will leach when soil water content becomes greater than the maximum soil water-holding capacity, as excess water will drain below the root zone carrying within it soluble N, mostly as nitrate. If the profile is dry, normal fine-textured Nebraska soils can hold up to 2 inches of available water and a gentle 4-inch rain can completely infiltrate without any leaching. However, if the soil profile is at field capacity, there might be as much drainage as rain.

In the spring or early summer (i.e., from March to June), mineralization of soil organic matter increases as temperature rises. In addition, application of N fertilizer near planting is a common practice, which greatly increases N concentration in soil. If excessive rainfall occurs during this period and drainage occurs beyond the crop root zone, N leaching will likely occur. The risk is even higher for coarse-textured soils.

Spring and early summer of 2015 were "wet" in east, south-central and west-central Nebraska. All of these areas received more than the normal amount of rainfall from March through June. For example, the Lincoln area received 5.3 inches more rainfall from March through June than its long-term average. York and Clay Center also received above average precipitation for the period.

As mentioned above, concentration of dissolved nitrate in soil can be high in the spring and early summer due to accumulation of nitrate released from soil organic matter and application of N fertilizer. Consequently, excessive rainfall can potentially lead to N leaching because of drainage beyond root depth for N uptake.

Using the Maize-N program developed by the University of Nebraska–Lincoln, we estimated possible N leaching losses in east and south-central Nebraska. Simulation results indicate a significant amount of N could be lost through leaching in east and south-central Nebraska (Table 1). This is based on assumed conditions of a silt clay loam soil with organic matter content of 3% and an application of 50 pounds N per acre at the start of May.

Using the Lincoln area for an example, as much as 78 pounds N could be leached below the depth of 30 inches. Although nitrate at deeper soil depth can still be available to crop uptake, its recovery efficiency may be lower. Such a situation could increase the risk of N deficiency for crops like corn, if in-season N application rates are not adjusted accordingly. For a coarse-textured soil, the risk of nitrate leaching in those areas can be even higher.

Further west, for example in North Platte, the risk of nitrate leaching remains low, because the amount of rainfall did not likely lead to water draining below the root zone.

This information is critical earlier in the season. In the future we will use this model to predict where large amounts of drainage might occur so that producers in those high N-leaching risk areas can evaluate the crop for signs of deficiency and adjust fertilizer management accordingly. 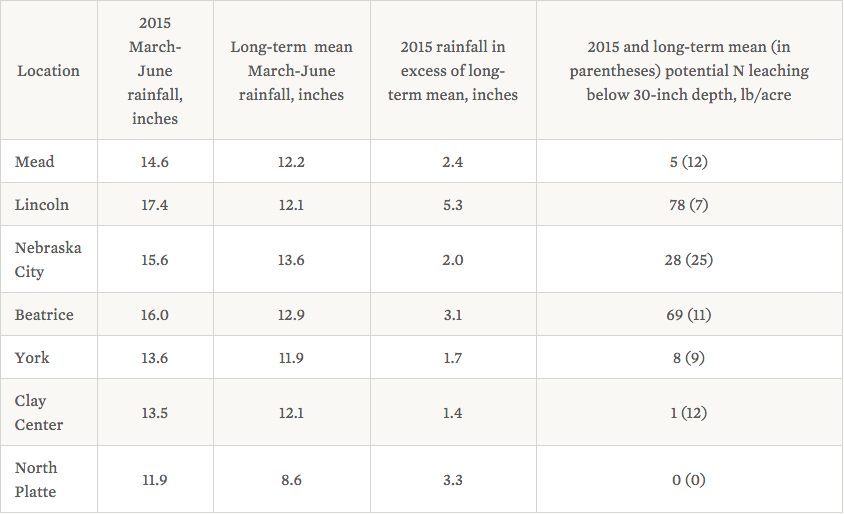 Table 1. Rainfall from March through June for 2015 and long-term normal (27 years on average) in some areas of Nebraska, and nitrogen leaching below 30 inches of soil depth as estimated by the Maize-N model in those areas. Nitrogen leaching is based on the assumption of a silty clay loam soil with organic matter content of 3% and a nitrogen application of 50 lb/acre on May 1. Weather data for all locations are provided by UNL High Plains Regional Climate Center.