This time of year a suite of insect pest species are feeding upon soybean foliage. This year the pest complex is dominated by Japanese beetle, grasshoppers, and green cloverworm, but other species are also active, including Mexican bean beetle and newly emerging bean leaf beetles.

When assessing defoliation, it can be difficult to determine which insect species are causing the damage, but the exact identity often is not that important. Defoliation assessments should lump together all tissue loss to determine whether spraying an insecticide makes sense.

Many folks tend to overestimate defoliation, so it can be useful to have a standard against which to compare the damage in the field. Below is an image illustrating various levels of defoliation and a method for assessing levels of tissue removal.

Keep in mind that insecticide application only make sense when field assessments find damage that exceeds economic thresholds (Table 1). “Insurance” applications of insecticides are often not effective or economical. Moreover, they usually kill beneficial insects (predators, parasitoids and pollinators) that are usually abundant in soybean fields and helpful in suppressing other insect pest species, such as aphids or mites.

Damage assessment is based on estimates of defoliation. To estimate defoliation, the following procedure is recommended: 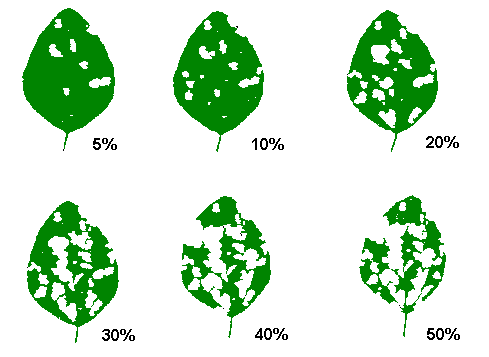 If defoliation exceeds the action threshold at a given stage of soybean development, then a rescue treatment may be warranted if the pest causing the injury is present and vulnerable to treatment. The Penn State Agronomy Guide, Soybean Pest Management section provides specifics on control options.