Dealing With Marestail in Oat and Wheat Fields

Oat and wheat harvest is in progress in Nebraska and some growers are getting a better view of weed infestations in their fields, including marestail (Figures 1 and 2).

Several populations of marestail in Nebraska are resistant to glyphosate products such as Roundup and Touchdown, as well as ALS inhibitors like Raptor, Scepter and Pursuit, reducing herbicide options for management.

Considering the height of marestail plants now (Figures 1 and 2), they must have emerged in fall 2014. Marestail, also known as horseweed, is an annual weed; however, it can follow a winter or summer annual life cycle. After emergence in the fall, marestail forms a basal rosette for winter survival. In a winter annual life cycle, the rosette bolts in the spring, growing up to 6 feet in height.

A single marestail plant can produce up to 200,000 seeds, depending on competition with the crop and weeds. The seeds can be easily transported by wind, providing effective spread of herbicide-resistant population.

While it is not possible to control marestail at this stage of growth when oat and wheat are ready to harvest, it is important to note the location of these marestail plants and then plan to manage them and newly emerged marestail in the fall. (The majority of marestail in Nebraska will usually emerge in the fall.)

It is important to scout the field in the fall and early spring for marestail. (See Time to Scout for Marestail and Other Early Emerging Weeds.) Herbicide options are limited for post-emergence, in-crop control of marestail, specifically in soybean. (See Post-Emergence Herbicide Options for Glyphosate-Resistant Marestail in Corn and Soybean.) 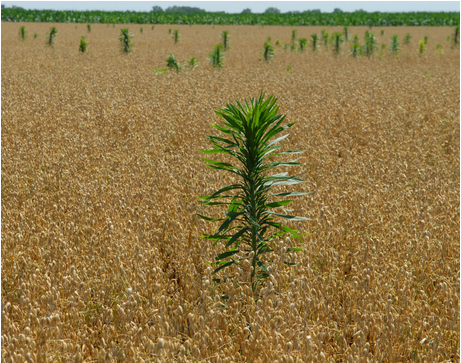 Marestail emerges in an oat field near Ithaca, Neb.