What is Causing Striped Corn?

Several growers in Ingham County, Mich., have expressed concerns about excessive striping, or interveinal chlorosis, of corn leaves. A certain amount of leaf striping in the new growth is noticeable every year. Corn usually grows out of this condition. This year, the symptoms are widespread over many acres and fields and they appear in newer and older leaves. Corn is currently at the V5-V6 growth stage. Affected areas are sometimes interspersed with a patch or row of healthy corn.

Scientific literature suggests corn striping often occurs due to several nutrient deficiencies. These nutrients include sulfur, magnesium, zinc and manganese. Symptoms are often similar and difficult to distinguish. Non-nutrient factors are also implicated, such as herbicide injury, root damage, cold temperature, corn genetics, soil pH and soil type. Striping may also appear when a period of rapid growth is followed by a period of slow growth induced by cold weather. With no clear cut evidence, there has been much speculation amongst growers, consultants and fertilizer service providers as to what is causing these symptoms.

In diagnosing problems of this nature, Michigan State University Extension recommends taking plant tissue and soil samples for nutrient analysis. One reason for this is that for nutrients such as sulfur, the soil test is not reliable. 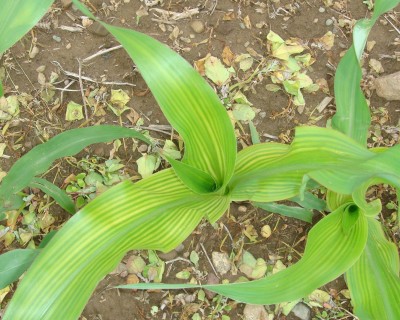 In this case, plant and soil samples were taken from normal and affected areas of the field. Plant tissue samples were sent to A&L Great Lakes Laboratories in Indiana for nutrient analysis. Soil samples were tested at the MSU Soil and Plant Nutrient Laboratory. These tests included most of the essential plant nutrients, but only the nutrients that were of interest to this study are featured in Tables 1 and 2.

Soil test data indicated the soil in the striped area was lower in organic matter, cation exchange capacity and pH compared to the good area. The striped area also had below optimum magnesium levels in soil. Sulfur levels were considered low in both areas, even though the soil test is not a reliable indicator for sulfur.

This study was limited in that only one composite soil and tissue sample representing good and striped areas of the field was analyzed. However, soil and leaf tissue tests pointed toward a magnesium deficiency and, to a lesser extent, sulfur deficiency as causing the leaf striping on corn.

Magnesium deficiency in low pH and coarse-textured soils is a concern in southwest Michigan. In this instance, the soil test recommendation for the striped area was 2 tons per acre dolomitic lime. These fields will benefit from a variable-rate fertilizer and lime application program. A rescue application of 20 pounds of magnesium sulfate (Epsom salts) as a foliar spray was ruled out this year because of excess rain and soggy field conditions throughout June and early July.