The most common sign of ergot infection is the dark purple to black sclerotia (ergot bodies) found replacing the grain in the heads of cereal crops and grasses prior to harvest (Figure 1). On the plant, the sclerotia replace the developing seeds and can stick out past the glumes (Figure 2). 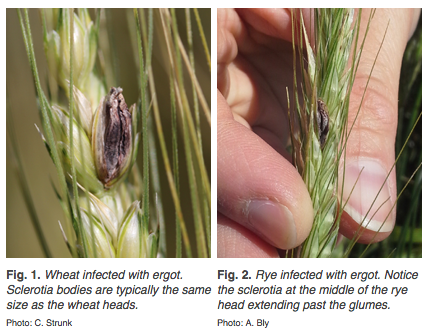 Ergot sclerotia may be present in or on the soil from previous hosts and can survive approximately one year in our area. The sclerotia may remain viable for several years in dry storage. There is a potential for ergot to develop every year but the weather is the key factor for infection to occur.

Ergot can be a marketing problem. The USDA Federal Grain Inspection Service grain standard, which is used by elevators, has defined ergot as a special grade (undesirable) for grain when the level of ergot exceeds 0.05% by weight.

Plant sclerotia free seed. Control of ergot is said to begin with planting seed free of sclerotia. Certified seed can have no more than 2% maximum ergot sclerotia for the registered class and no more than 3% for the certified seed class. Seed producers typically do not want even that much, and wheat growers usually don’t want it either

Utilize crop rotation. In addition to planting clean seed another effective strategy is crop rotation. Avoid planting wheat near previously infested fields for one year, the approximate life span of the sclerotia bodies. The effectiveness of rotation to a non-susceptible crop will be diminished if grasses and grassy weeds in ditches and fencerows surrounding the field were allowed to head the previous year.

Clean the seed. Ergot can be cleaned out of the grain by using a gravity table. The grain can then be used or sold. Some shrink or loss of grain may be necessary to remove most of the ergot from the seed

Ergot not only causes reduced yield and quality of grains and hay but it also causes a toxic livestock disease called ergotism, if the infected grains or hay are fed. Ergot contains several toxic alkaloids. More information on ergotism can be found in the iGrow article, Ergot: A potential poisoning problem for livestock.