Wheat harvest is now in progress and will continue over the next several days before and after the next showers. Early reports on grain quality indicate that a few fields may have moderate levels of scabby grain, and consequently could have vomitoxin contamination above thresholds set by grain buyers.

The threshold set by the U.S, Food and Drug Administration for harvested grain intended for animal and human consumption is 2 ppm, but elevators may accept grain with slightly higher levels, depending on how big of a problem we have and whether or not they can find clean grain to blend.

Although head scab was not widespread across Ohio this year, there were a few small pockets with 10-15% scab incidence (10-15 out of every 100 heads with some amount of scab). These will likely be the fields with the biggest grain quality and vomitoxin problems. In addition, the rains we’ve had over the last few weeks may have contributed to making the situation worst, increasing scabby grain and vomitoxin levels and reducing test weight beyond what you would expect based on the observed levels of scab.

Remember, scab causes kernels in affected heads to become small, shriveled, lightweight, discolored (whitish and pinkish), and contaminated with vomitoxin (and other mycotoxins). So in general, the more scab you have, the more damaged kernels you will see in your grain lot, and high levels of damaged kernels are often associated with high levels of vomitoxin contamination.

However, scab is not the only thing that reduces grain quality. Other late season diseases such as Stagonospora, as well as poor weather conditions in the weeks leading up to harvest, may also cause kernels to become shriveled and lightweight. So before you start worrying about vomitoxin or even think about abandoning the crop, examine the grain lot for the presence of chalky-white, pinkish kernels; this would be a good way to tell whether you have a grain quality problem and whether it is due to scab or some other factor. 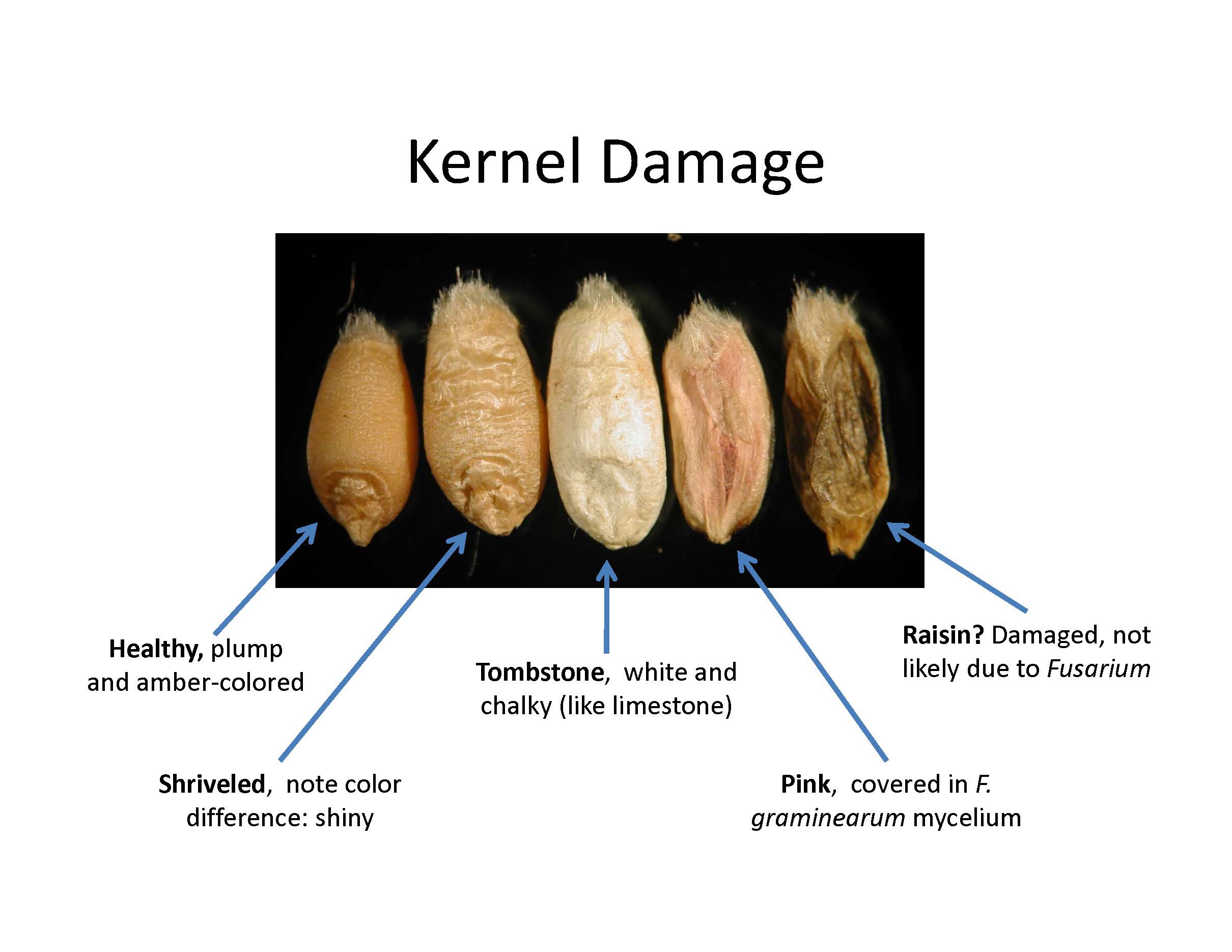 Before you begin to harvest, collect and thresh multiple heads (two to three handfuls) from multiple locations across your field and examine the grain for discoloration. If you see a lot of small, shriveled, discolored kernels, you should consider increasing your fan speed during harvest to blow them out. Research in the cereal pathology lab at OSU/OARDC showed that when harvesting wheat from scabby fields, increasing the fan speed and air flow through the combine can reduce the amount of scabby kernels and vomitoxin in the grain lot by an average 30-45%, and increase test weight by about 6%. This could reduce price discounts by up to 50%, depending on how badly damaged the grain is.

Harvest suspect fields separately from healthy fields, and make sure you dry the grain down to below 15% moisture before storage. Store dried grain at cool temperatures (35-45 F). This will reduce the risk of further mold growth and mycotoxin problems in storage.