Glyphosate has been the most widely used pesticide in the U.S. since 2001. It effectively controls many weed species, and it generally costs less than the herbicides it replaced. Crop growers can spray entire fields planted with genetically engineered, glyphosate-tolerant (GT) varieties of corn, cotton, soybeans, and other crops, killing the weeds but not the crops. This practice makes it easier to manage weeds using less tillage, which can help reduce soil erosion as well as improve soil quality and water conservation.

However, glyphosate is becoming less effective as weed resistance mounts — 14 glyphosate-resistant (GR) weed species have been documented in U.S. crop-production areas. GR weeds can reduce crop yields and increase weed-control costs, and recent surveys suggest that the amount of affected cropland is increasing.

Sole reliance on glyphosate by many growers is believed to be the primary factor in the evolution of weed resistance to glyphosate. Using glyphosate as the only weed control tactic can select for resistance to this herbicide by controlling susceptible weeds while allowing more resistant weeds to survive, propagate and spread. Using herbicides with different mechanisms of action, however, and rotating their use over time can result in fewer herbicide-resistant weeds.

Since the commercial introduction of GT crops in 1996, U.S. growers have planted GT varieties and applied glyphosate on more soybean acres than corn acres. The proportion of acreage planted with herbicide-tolerant (primarily GT) varieties reached 93% for soybeans and 85% for corn in 2013. The share of soybean acres treated with glyphosate (alone or with other herbicides) increased from 25% in 1996 to more than 90% in 2006-12, while the share of corn acres treated increased steadily from 4% of acres in 1996 to 73% in 2010, as the use of other herbicides decreased.

While a greater quantity of herbicide active ingredient was applied to corn than to soybeans, herbicides other than glyphosate accounted for the majority of the herbicide applied to corn. As a result of these differences in herbicide use patterns, more glyphosate (in pounds of active ingredient) was applied to soybean fields than to corn fields. Further, tillage — which controls weeds without promoting herbicide resistance — was used on a greater percentage of corn than soybean acreage, whereas no-till was used on a greater percentage of soybean acreage. 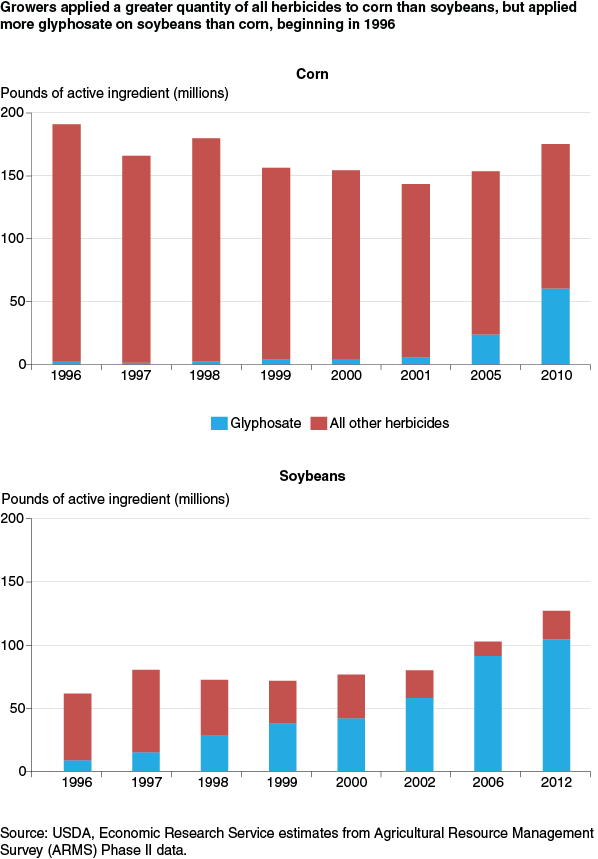 There is an important reason why GT soybean varieties have been adopted more rapidly than GT corn varieties and why more glyphosate has been used on soybeans than on corn in the U.S. Weed management in corn fields involves not only glyphosate, but also other inexpensive herbicides, such as atrazine. In contrast, weeds in many soybean fields are managed with glyphosate alone, because the next best alternative herbicides for soybean fields are more expensive, less effective, and/or can cause significant injury to soybean plants.

Glyphosate use in soybean production has resulted in the spread of GR weeds more than its use in corn production. Recent data obtained by the Agricultural and Resources Management Survey (ARMS), managed jointly by USDA’s Economic Research Service and National Agricultural Statistics Service, show that growers reported GR-weed infestations on 5.6% of corn acres in 2010, with the Corn Belt and Northern Plains accounting for the majority of infested corn acres. In contrast, growers reported a decline in the effectiveness of glyphosate in controlling weeds on almost 44% of soybean acres in 2012; the majority of these acres were also in the Corn Belt and Northern Plains. However, growers reported GR weeds and declines in glyphosate effectiveness on greater percentages of both corn and soybean acres in the South than in the North.

An ERS study used statistical procedures to identify growers in the 2010 and 2012 ARMS surveys with similar characteristics and then estimate the average impact of GR weeds or reduced glyphosate effectiveness on yields, production costs and returns. The study found that corn growers who reported GR weeds and soybean growers who reported reduced glyphosate effectiveness realized lower returns than similar corn and soybean growers who did not.

The ERS study also used a model that combines a biological model of weed growth, seed dispersal and glyphosate resistance, and an economic model of weed management to examine the effects of herbicide choices that 1) accounts for the cost and yield effects of glyphosate resistance over time and estimates the highest possible return over many years; or 2) ignores glyphosate resistance and instead estimates the highest possible return in the short term (e.g., the next year). The model used data from ARMS and from the Benchmark Study conducted by university plant scientists on the effects of resistance management practices used by corn and soybean growers in six states during 2006-09.

Model results also show that initiating resistance management reduces returns in the first year, but increases them in subsequent years. The difference in returns between managing and ignoring resistance increases with the consecutive number of years of the herbicide choice, as the value of crop yield gains outweighs increases in weed management cost. After 2 consecutive years of resistance management, the cumulative impact of growers’ returns from continuous corn cultivation, corn-soybean rotation, or continuous soybean cultivation exceeds that received when resistance is ignored.

Since wind, water, animals and human action, including the movement of farm equipment, can disperse weed seeds between fields, the effectiveness of resistance management on one farm can depend on the use of resistance management practices on neighboring farms. As a result, the susceptibility of weeds to glyphosate is an example of what economists refer to as a “common-pool-resource.”

Common-pool resources create a potential dilemma, in which choices by users (e.g., growers) pursuing short-run objectives lead to outcomes that are not desirable from anyone’s long term perspective, for two reasons: 1) it is costly to prevent those growers who have a short-term view from using the resource (weed susceptibility to herbicides), and 2) the use of the resource by each grower (by not managing resistance) reduces its availability to others. Without effective rules limiting access and providing incentives for users to invest in, rather than exploit, the resource, common-pool resources are vulnerable to overuse. 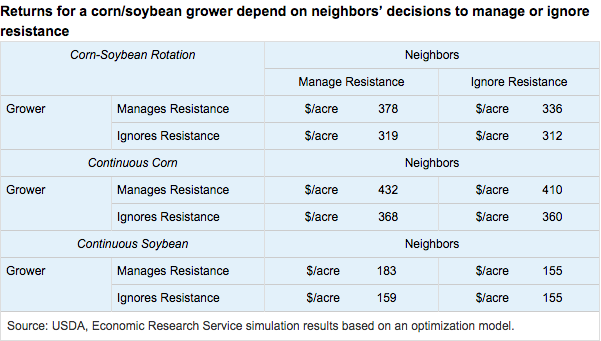 Results of the 2012 ARMS soybeans survey suggested that many soybean growers are aware of the common-pool-resource nature of weed susceptibility to glyphosate: 53% of the soybean acres with at least one resistance-management practice (RMP) in place were managed by farmers who believed that the RMPs would be more effective in delaying herbicide resistance if operators of nearby farms also used them. Those soybean growers used more RMPs and received higher yields and returns than similar soybean growers who reported different beliefs; they were more likely than other soybean growers to use herbicides other than glyphosate, use the label-recommended application rate, control weeds at the appropriate life stage of the weed, and ensure that all weeds had been killed by herbicide(s).

Those survey results together with simulations of weed-seed dispersal impacts suggest that soybean growers aware of the common-pool-resource nature of weed susceptibility to glyphosate have an economic incentive to encourage neighbors to use RMPs. Evidence of cooperation among crop growers in Arkansas and North Carolina suggests that some growers are responding to such incentives and collaborating in local-area management of herbicide-resistant weeds.

This article is drawn from "The Economics of Glyphosate Resistance Management in Corn and Soybean Production."