With the heavy rains in the past few days and the rain forecasted for next week, growers are wondering how much of the applied nitrogen (N) has been lost.

The amount of N lost will depend on several factors, but the major factor is the form of N applied. Some surface-applied N can be lost in the runoff water with intense rainfall, but this will generally be only a minor amount. Denitrification losses can be significant if the N is in the nitrate (NO3-) form.

Fortunately, at this point of the season the majority of the applied N should still be in the ammonium (NH4+) form, which will not denitrify. Lloyd Murdock put together a nice publication a few years back to calculate the potential amount of N loss from denitrification (see below). With the exception of N lost in surface runoff (probably a minor issue), there has likely been little N loss to date.

Wet soils cause N losses, and determining how much N is lost is necessary to choose the proper management options. In cases where high intensity rain results in high runoff, leaching losses will probably be low. The primary N loss mechanism in saturated soils is denitrification, which occurs when soil nitrate nitrogen (NO3-N) is converted to nitrogen gas by soil bacteria.

Two to three days of soil saturation is required for bacteria to begin the denitrification process. Well-drained upland soils that have been wet from a series of rains probably have not experienced much denitrification. Soils in lower landscape positions that stay saturated longer will likely lose more N. 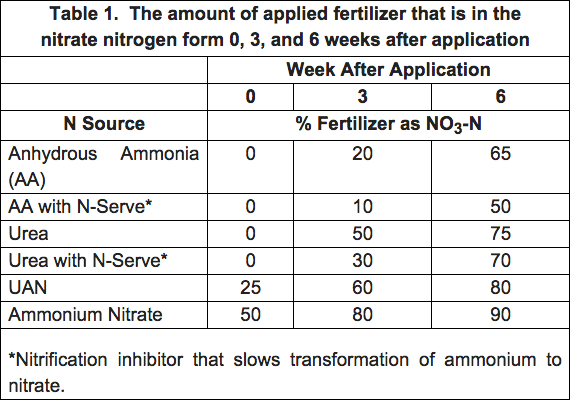 A farmer applied 175 pounds N per acre as urea to corn grown on poorly drained soil.  Because of a series of heavy rains, 3 weeks after application the field became saturated for 7 days. How much N was lost?

Step 2. Determine the amount of N lost. Remember that 2 days are needed for the bacteria to begin the denitrification process.  Therefore, denitrification occurred for 5 days (seven days total saturation minus 2 days to start the process). With 4% lost each day for five days, 20% would've been lost. 88 pounds N x 20% = 18 pounds N lost and 157 pounds N remaining. The N loss calculated in this example is not as high as most people would assume. A soil N test can verify this estimation.

If the nitrate-N is less than 11 ppm, there is a low amount of plant-available N in the soil. Therefore, there is a good chance corn will respond to a sidedress application of N ranging from 100-150 pounds N per acre.

If the nitrate-N is between 11 and 25 ppm, there is a greater amount of plant-available N in the soil, indicating corn may or may not respond to sidedress N. The recommended sidedress N application at this soil test level is 0-100 pounds N per acre. If the soil test nitrate-N is close to 11 ppm, then higher sidedress N rates would be used. Lower rates would be used as nitrate-N approaches 25 ppm. The test is least accurate in this range, so the test results can only be used as a broad guide.

If soil test nitrate-N is greater than 25 ppm, there is adequate plant-available N in the soil, which indicates corn will probably not respond to sidedress N application.

Nitrogen Broadcast Prior to Rain

Farmers sometimes broadcast fertilizer N on a field within 24 hours of a heavy rain.  In most cases, very little N is lost to runoff, especially if the field was under no-till soil management. The N fertilizer begins to dissolve almost immediately after being applied to the soil surface and will dissolve completely in a short period of time.