PCR Tests for Clubroot in Canola

Clubroot is an interesting disease. It is neither virus nor bacteria; it is not a plant or an animal. It is, in fact, a protist.

What are protists? Protists are a large, diverse group of organisms; they are all eukaryotic (meaning their cells contain a nucleus and other organelles enclosed within membranes), and many are unicellular. Protists include plant-like protists (algae), fungi-like protists, and animal-like protists (protozoans).

As most canola growers know well, the difficulty with clubroot is that early infection causes symptoms that are difficult to assess with the naked eye.

“Early infection of the canola plant, however, shows wilting, stunting and plant yellowing, all of which can be easily mistaken for other diseases, including blackleg, fusarium wilt or sclerotinia to name a few,” says Nicole Calliou, molecular biology technician at BioVision Seed Labs in Alberta. “Or it can be incorrectly attributed to moisture stress. It is in these instances where we get farmer-submitted samples to rule out clubroot as the cause.

All sorts of individuals use PCR tests for all sorts of reasons. “Sometimes we receive soil samples from oil and gas companies who will be assessing land for construction,” says Calliou. “Sometimes it is for governmental or university associated teams who are tracking the spread of clubroot by surveying where it was last reported and how far it has spread since the last survey.”

“Sometimes we receive samples from farmers who are seeing symptoms in their field and want to know if it is clubroot or something else,” she continues. 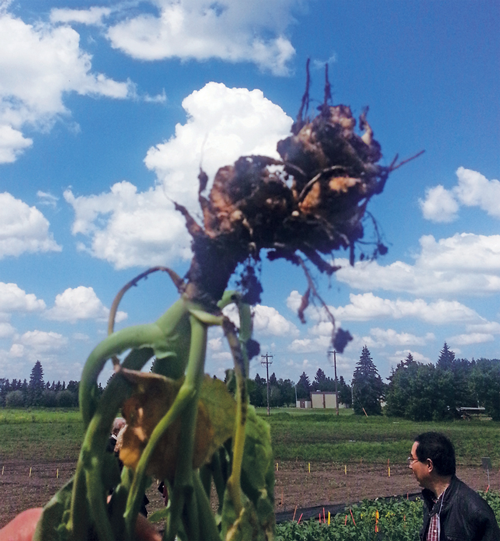 Unlike this plant, early clubroot is difficult to detect, experts say, but RT-PCS tests can help.

What Are PCR Tests?

Used to detect clubroot in canola, PCR (polymerase chain reaction) tests analyze short sequences of RNA or DNA. Growers who think they may have clubroot present in the field should send a soil sample to one of three Canadian commercial laboratories: 20/20 Seed Labs or BioVision Seed Labs, both in Alberta, or Discovery Seed Labs in Saskatchewan.

Before sending a sample, fields should be scouted to identify other potential problems first. If clubroot is suspected, growers need to send in a soil sample. “This subsample should be either from a suspected area or from the field approach — the most likely area to be infected,” says Calliou. “Once it arrives here in the lab, we use the MoBio PowerSoil DNA Isolation Kit to extract the clubroot DNA.”

Once the DNA has been extracted, BioVision’s lab technicians will use the QIAgility robot to prepare the RT-PCR plate. “This eliminates the change of operator error,” says Calliou.

The plate is then loaded into a Bio-Rad CFX thermal cycler RT-PCR system. “This is a bit different and more advanced than a traditional PCR,” says Calliou, who explains that a traditional test will amplify the target DNA and then load it onto an agarose gel.

In RT-PCR tests, agarose gels are not used. Instead, to amplify the target DNA a fluorescent dye is added to the mix. The dye is called SYBR green and it binds dsDNA (double stranded DNA). “The Bio-Rad System reads the plate for this reporter dye every cycle and shows the results onscreen in real time,” says Calliou. “At the end of the PCR run there is an additional step added where the Bio-Rad system heats the DNA up slowly to really hot temperatures and records the results.

“DNA that is bonded tightly takes longer to fall apart,” she explains. “Depending on the size of the product, it will fall apart at very specific temperatures. In the end, we look at the RT-PCR run and see which samples have amplified using our clubroot primers and are above computer-set threshold level.”

The melt curve is then evaluated and compared to the lab’s known standard. The DNA melt curve needs to peak at the same temperature as the known standard, explains Calliou. “Then, if requested by the customer, we can use known clubroot spore load samples for qualitative RT-PCR,” she says. “RT-PCR is where we can tell the customer how much clubroot is present in their soil sample.”

This service is provided upon customer request. Contact BioVision staff for a quote.

The cost of the RT-PCR test is about $100 and it takes approximately seven to 10 days to obtain results. Quicker results of three to five days are possible, if needed, says Calliou, but be prepared to pay a rush surcharge of $40. BioVision provides free shipping and free containers to their customers.