March 2, 2014 — Many cotton fields are too big to survey on foot to yield timely information about the health of the crop. Specific areas, for instance, may need treatment for diseases, weeds, irrigation, or applications that enhance plant growth.

Chenghai Yang, an agricultural engineer with the Agricultural Research Service’s Aerial Application Technology Research Unit in College Station, Texas, has developed an imaging system to help growers get that information: Digital images are taken from aircraft and are detailed enough to show patches of large fields in need of special attention.

Small aircraft have been used for years to survey fields and treat crops for pests, diseases, and other problems. Yang, working with Texas A&M AgriLife scientists, began evaluating whether aerial imagery could spot specific problem sites in cotton fields when, a few years ago, growers started using a new fungicide for cotton root rot control.

Root rot infections are usually limited to 20 to 30 percent of a field. Ideally, growers should identify infected areas near the end of one growing season so they could apply the fungicide to just the areas that are infected at the start of the next season. But instead, many routinely treat entire 200-acre fields, wasting a fungicide that costs about $50 an acre, says Yang.

“If you’re treating 100 acres unnecessarily, at $50 an acre, you’re wasting $5,000, and some growers do that every year because there is no easy way to detect infection sites,” he says.

Yang and his colleagues mounted two digital cameras on the underside of a small airplane, equipped them with GPS, and took images of cotton fields to see whether they could identify areas with cotton root rot. They also evaluated whether the cameras could identify the widths of cotton rows—a key indicator of plant height. 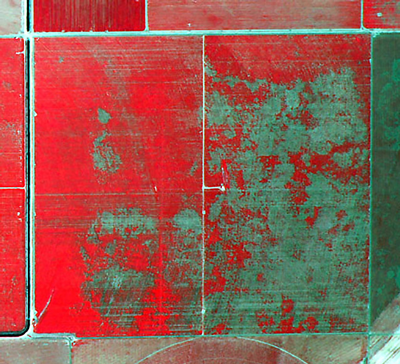 One camera took standard color images. The other was filtered to shoot in near-infrared, which is often used in aerial imagery because of its effectiveness at detecting plant stress. Yang tested the system for 2 years in about 40 flights on both sunny and cloudy days.

Yang’s published results show that aerial imagery could detect the presence, location, and disease progression of cotton root rot. The team showed that cameras could be used to detect weeds and invasive plants and identify areas affected by drought stress.

The efforts mean that agricultural pilots have a new service: aerial surveys that help growers identify diseases, pests, and other problems in specific areas. The dual-camera system used in the studies costs about $6,000. But Yang says that a $1,500 system, with a single camera, a GPS receiver to geotag images, a monitor, and a remote control for shooting images while airborne, will also work well.

The camera can be attached to the bottom of an aircraft with minimal modifications. Fees for aerial surveys should be offset by the reduced costs for the pesticide, and fewer chemicals will get into the soils and waterways, Yang says.