Do we grow another bushel or save a buck? The obvious answer is, "Yes!" Most of us try to do both.

However, the predictions for the 2015 cropping season are for lower corn prices. Farmers are wondering whether they should continue trying to increase production on their farms or cut costs and try to save a buck by not going after the most expensive yield. This article reviews some of the important decisions that growers need to make as plans are made for lower corn prices in 2015.

In many ways we are "back to the future." Corn prices are not as bad as the 1990s and early 2000s, but they are projected to decrease nearly 50% from recent prices. Frugal innovation may be required. When corn prices are low farmers must:

It is very difficult to get a handle on the cost of production of a crop enterprise. We do know from PEPS data that two inputs that have increased dramatically over the last 25 years. From 1987-2011, seed cost has increased 4-5 times. Fertilizer inputs have increased 2-3 times. Chemical and equipment costs have remained relatively flat. Harvesting costs fluctuate with the year, becoming higher in cold, wet seasons due to higher drying costs. The cost of land has increased dramatically in the last 5 years.

In the example using plant density, zero plants equals zero yield. Often some grain yield results with no input. For example, N is continuously mineralized from the soil so even though no N fertilizer may be applied, some yield can still be achieved. Other decisions like fungicide, tillage and row spacing have little impact on the yield curve. 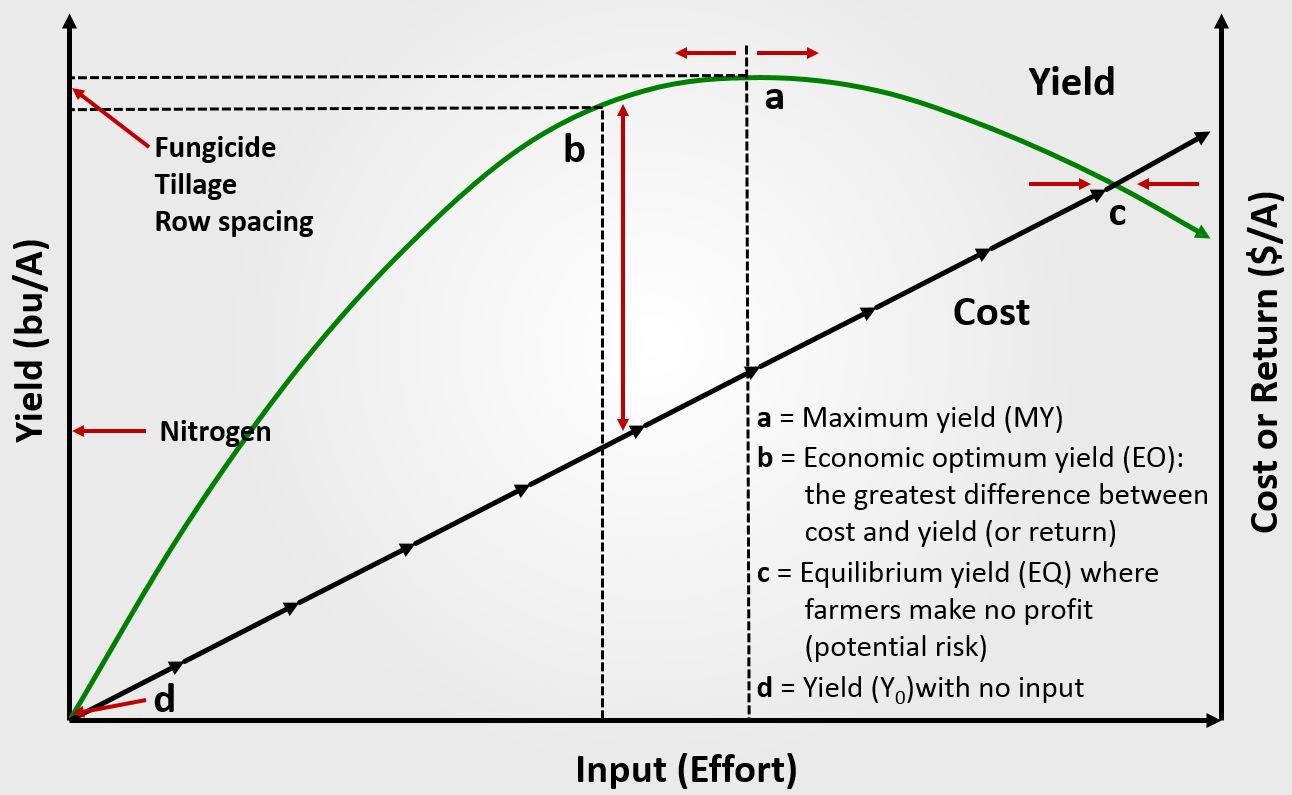 In corn production, the most important variable with the least management control is weather. We have to accept the fact that Mother Nature has the upper hand. Management decisions and timing are continuously impacted by weather. Drainage is critical in the spring. Crops in the Midwest are challenged by 1) cool, wet springs that often result in lack of root surface area; and 2) dry, hot summer conditions during pollination, kernel set and grain filling.

The corn crop grows best in a spring dry enough for early planting, but wet enough to activate herbicides and promote good stands with uniform emergence. Summers should have timely rain of about 1 inch per week, lots of sunshine and temperatures in the mid-80s during the day and low-60s during the night. Falls should have sunny dry weather to speed dry down and allow harvest of grain at 22% moisture by Nov. 1.

Figure 2 shows data from Lancaster, Wis., in plots where no M has been applied since 1966. The average yield of these continuous corn plots is around 50 bushels per acre. In other rotations involving corn-soybean and corn-soybean-oats-alfalfa, yield is at a higher level with zero nitrogen. For the most extended rotation, yield has been increasing over time.

Figure 2. Corn Yield at 0 lb N/A for continuous corn, corn-soybean, and corn-soybean-corn-oat-alfalfa rotation at Lancaster, WI. Plots were established in 1966. 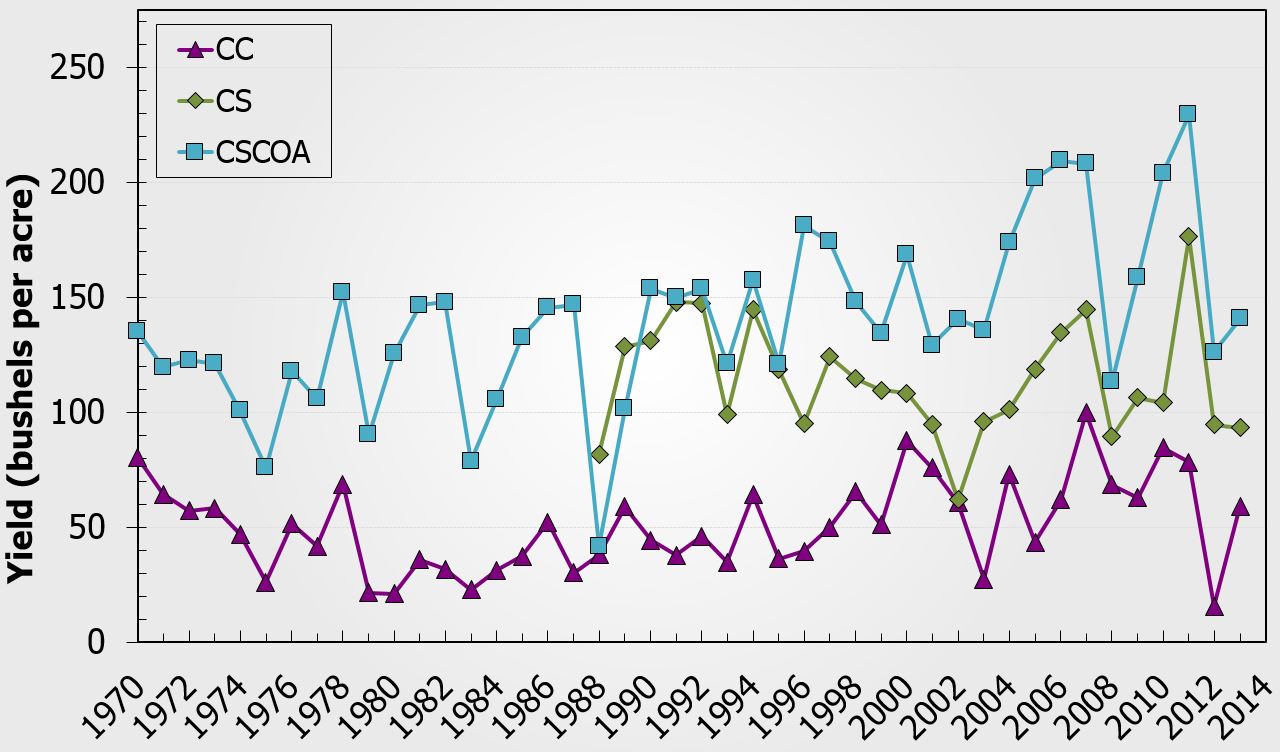 Corn hybrid selection is arguably the most important management decision a farmer makes because increasingly the choice of hybrid dictates management.

The principles of hybrid selection include:

Remember that traits do not add to yield — they protect it. The University of Wisconsin (UW) hybrid evaluation program has conducted 939 corn hybrid trials since 1973. The average yield of these trials is 165 bushels per acre. The difference between the top-yielding hybrid and the bottom-yielding hybrid in a trial is 70 bushels per acre. If you divide 70 into 165 the average yield swing for a hybrid selection decision is 42%.

The crop rotation decision provides the easiest yield a farmer can get. In UW trials, corn yield increases 10-19% when rotated was citing. The rotation effect last at most 2 years and depends upon the length of the break between the crops of interest. If you have 2 or more break years then yield of the second year of the continuous crop will be greater than the yield of continuous crops. If only one break year is grown then the yield of the second year equals that of continuous cropping.

The rotation effect is even more dramatic in stressful years. In Figure 3 the rotation effect lasts 2 years, increasing corn grain yield 15-17% for rotated according to first-year corn, following five users arriving in 6% for second-year corn. Conventional tillage increases corn yields about 4%, however there is an interaction that occurs, which we will come back to later.

Figure 3. The rotation effect of corn following soybean in Conventional-(CT) and No-Tillage (NT) at Arlington during 1994-2013. 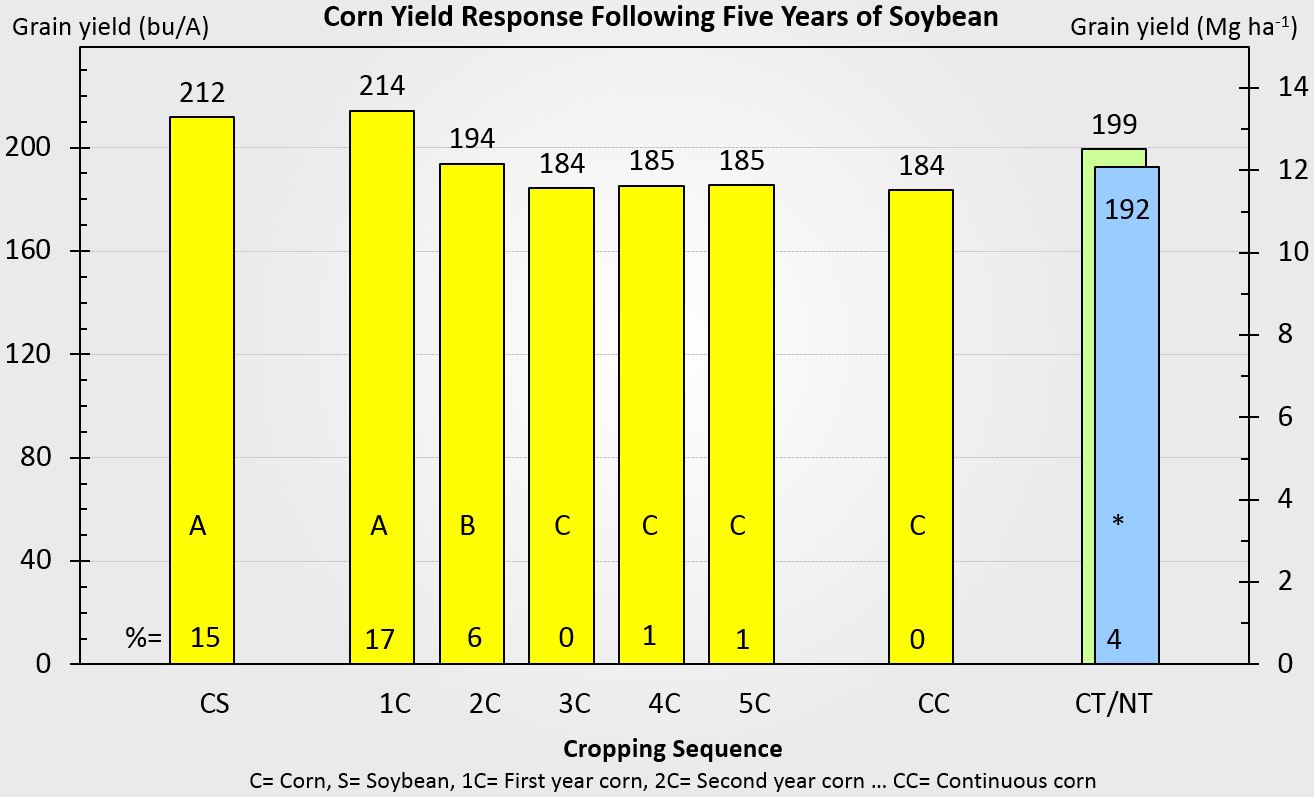 Planting date is a "priceless" decision because it sets up management timing for other inputs during the season. If a farmer is forced to plant late, then a "double whammy" results with lower yield and higher grain moisture.

Fertilizer, especially N, is not the place to cut costs. Farmers should soil test and efficiently apply needed nutrients using the cheapest form of fertilizer per unit of N, P and K.

Using manure and legume credits can help reduce purchased fertilizer costs. Don't cut back on overall N supplied unless you have been over-applying. Do not use micronutrients unless soil test recommendations encourage it.

Plant distribution in the field is determined by plant density and row spacing. Plant density has the most potential to move a farmer from their current yield levels. Maximum yield plant densities are increasing over time as newer hybrids are commercialized. 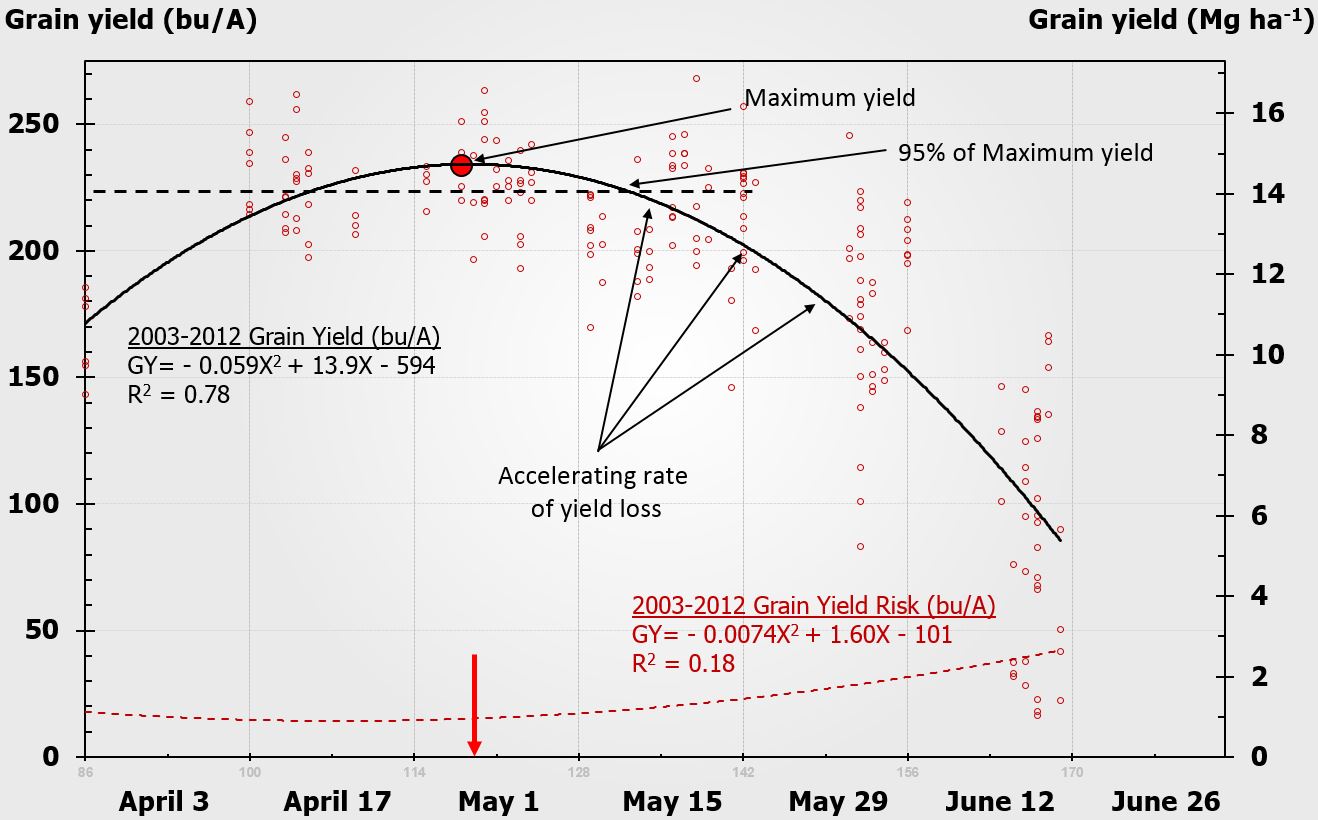 However there is a yield and quality trade-off. As plant density increases, forage quality, as measured by Milk per ton, decreases. So the economic optimum for silage, as measured by Milk per acre, is about 6,000 plants per acre greater than the grain maximum yield plant density. The response is fairly "broad-shouldered" in that 95% of the maximum for these measurements can be achieved at 26,000-32,000 plants per acre.

Pest control is an important series of decisions in corn production. For most major corn pests, economic injury levels and economic threshold levels are known. In corn, weeds are considered more of a problem than insects, and insects are more of a problem than diseases. Plant breeders have done a good job of developing corn hybrids resistant to insect and disease pressure.

Early-season weed competition can significantly reduce yield in high-yield environments. In a Nebraska study, delaying weed control reduced yield if weeds were not controlled by V5.

For insect management, it's all about scouting and timing. Insects are adapting to our cropping practices and they will likely continue to evolve.

For disease management, the goal is to improve the corn canopy leading to yield increase and disease decrease. Genetic resistance is the cheapest form of control. Scout for these diseases in particular: anthracnose, northern corn leaf blight, diplopia, and Fusarium/ Gibberella. Recently, foliar fungicides have become more widely used. However, UW research shows only 2 of 32 studies significantly increased corn yield with fungicide use.

Finally, harvest and store your crop carefully. There's a trade-off between field losses and drying costs. The recommended harvest moisture range is between 20% and 25% moisture. Large field losses can occur with lodging and ear droppage. For safe storage, corn must be dried below 15% moisture, so some drying is often needed after harvest.

Success with precision farming (PF) is proving elusive. Technology used in PF is available and affordable, but the agronomy is lacking. A new exciting PF technology is unmanned aerial vehicles (UAVs). UAVs with appropriate sensors have the potential to allow detection of in-season field problems early enough to be corrected.

In conclusion, the relative impact of corn management decisions on grain yield varies with the decision being made.

Weather has the largest impact, but we can do little about it. The hybrid that you choose for your fields can have anywhere from 0-42% yield swing (70 bushels per acre for grain and 12,000 pounds of milk per acre for silage). The presence or absence of genetic traits can swing yield 0-100%.

Suggestions for Planning for Rising Fertilizer Prices and Bull Markets