The 2014 harvest season has started and should be in high gear within the next week. As producers begin harvest they will need to be thinking about many management plans for next seasons crop. Herbicide programs and weed management strategies will be one of those topics that producers need to consider this fall as harvest wraps up this current growing season.

Fall herbicide applications should be considered by no-till farmers, especially those who have had past problems with marestail. The focus of a fall application for most winter annual weeds should be to control the weeds that are present in the field in the fall rather than plants that will emerge next spring.

This fall is likely to give us a lot of winter annual weed emergence since we've had high amounts of precipitation in August and September. In most cases, a properly timed application of glyphosate, 2,4-D, and/or dicamba from mid-October to mid-November will control the weeds that emerged this fall and provide fields with lower densities of smaller weeds next spring that can be more easily controlled with a spring burndown, than fields that did not receive a fall burndown. 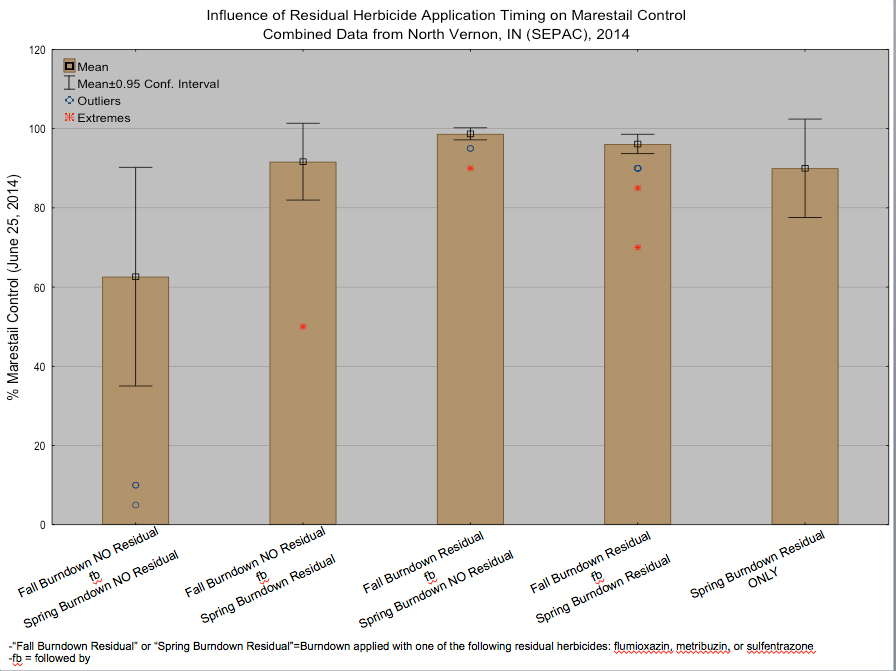 The success of this past year's fall residual herbicides will not occur every year, it all depends on the weather and we all know it’s improbable to predict what the winter and next spring will bring. In a year with a warmer-than-usual winter and early spring the residuals will quickly break down and allow winter annuals to emerge into the planting season, which will require another burndown and another residual herbicide to control weeds into the soybean growing season. The necessity of a residual herbicide in the fall is always in debate amongst producers and weed scientists. A residual herbicide applied later in the fall can keep fields cleaner longer in the spring, and can in some years provide enough activity to keep fields clean up to planting. With the cold, harsh winter we experienced this past year, residual herbicides persisted well into the spring planting season. There were several cases this year where residuals persisted too long and soybean injury occurred because of additive effects from the remnant fall residual and a spring residual that was applied.

This is why our general recommendation from year to year is to save the residual until the spring when you know that it will persist into the soybean-growing season.