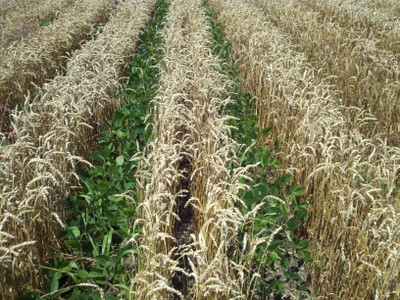 Soybeans were intercropped into wheat (much earlier than in past years; 5/23 in north central Ohio) utilizing a twin-row system, which can be described as two 8-inch wheat rows and a 22-inch skip. Soybeans were interseeded into 15-inch-row wheat on May 28 in central Ohio at OARDC, South Charleston (SC). Various trials were conducted within the MRI system that included the evaluation of seed treatments, hybrid maturities and the effect of interseeding on wheat yield.

This article focuses on the overall trial averages and production observations.

Thus, one of the goals of MRI trials was to reduce the very low soybean yield production years. Hence, with wide row wheat (15-inch) yielding relatively well in OSU Wheat Performance trials, the focus in 2014 was on improving soybean yield via the aforementioned wheat row/cropping systems.

In 2014, over all plots soybeans averaged 38 bushels per acre and wheat 71 bushels per acre at the two Ohio locations in the 15-inch-row and a twin-row wheat spacing systems. It should be noted that in the 8 different small plot field trials comprising all plots (randomized complete block, 4 replications) wheat and/or soybean yields may be lower or higher.

There were differences in average yields when looking at the sites and production systems. In 2014, MRI 15-inch and twin-row soybeans yielded above the 15-year averages over all plots. Wheat yield was above average in 15-inch rows at SC but below average in north central Ohio for the twin row system.

First, it should be noted that direct comparisons of the MRI row spacing systems couldn’t be made from the above data. As is the case every year, new information from our 2014 trials added to our previous experiences with this system. This year was about learning the production factors associated with these wheat row spacing systems and the planting and harvesting equipment.

We did pay significant attention particularly with the twin-row wheat system. The following are observations of the MRI system in the different row spacing’s used in 2014:

1. MRI (planting of soybeans into wheat) can be conducted with many different common farm implements (some fabricated on farm). Equipment used includes drills, toolbar planters, corn planters and variations. The key concept with equipment is to plan for, and if possible, practice running the equipment in the fall prior to wheat planting with the tractor/soybean interseeding equipment. Tramlines in the wheat are essential to allow not only for precision soybean planting but also wheat management (weed, disease and fertility treatments). Most tramlines are set up to facilitate tractor and sprayer tires.

2. Wheat row spacing may range from 10 to 20 inches. Wheat grown in rows greater than 10 inches may experience a wheat yield drop. This drop in wheat yield is relatively small up to 15 inches (from 5-7%) over various studies conducted in Ohio, Kentucky and Ontario. However, this data did not include wheat grown in the twin-row system. Twin-row wheat yields in 2014 were below expectations. We surmise this was due to a variety of factors including inadequate wheat stands and nitrogen fertility.

3. In the spring prior to wheat planting, use an appropriate soybean variety that may be harvested early enough to permit timely fall wheat planting. In the MRI system, sow wheat at or soon after the Hessian Fly Free Date. Plant wheat seed at 1.6 to 2.2 million seeds per acre in 10-inch rows, or if in 15-inch rows, no more than 25 seeds per foot of row.

4. Select wheat varieties that are: high yielding, disease resistant, early maturing and short, if possible. Confirm that wheat seed is treated with appropriate fungicides. Go to http://agcrops/osu.edu and check out the OSU Wheat variety performance trials and the 15-inch wheat row trial data.

6. Marestail weed control was below average at SC and North Central Ohio in 2014 due to lack of a systems approach to the control of this weed. Control marestail and other weeds prior to planting wheat with use of appropriate herbicides (glyphosate plus Sharpen is an example of a treatment that can be used prior to wheat planting to control marestail and many other weeds). There are other herbicides that may be used in the fall after wheat has emerged to control marestail. Spring germinating marestail can be controlled with 2,4-D applied just prior to Feeke’s GS 6.

Interseeding can be done too early. There must be adequate light for the developing soybeans (and wheat). If interseeding is conducted too early, there is the possibility that soybeans will decrease wheat yields via excessive competition and further the soybeans may be damaged as well at wheat harvest. We did clip soybeans in the twin-row system in 2014 and this was probably due to the late wheat harvest date (50 days after interseeding).

However, in general, we will again plan to interseed in mid to late May in 2015 after our experience in 2014.

8. Wide wheat rows will facilitate earlier soybean planting, but a wheat yield reduction is possible. This wheat yield loss is due to both increasing row width and the interseeding of the soybeans. In 2014, we observed a 5-bushel drop in interseeded wheat yield at SC.

10. Available plant water for soybean growth and development is critical. Stated in another way, timely rainfall events in July and August are very important to soybean yields. For example, in 2013, MRI soybean yields were exceptional (54 bushels per acre) with about 25 inches of rain from the middle of May to Oct. 1. (Our hypothesis for 2014 was to plant earlier with later-maturing soybean varieties that have a longer grain fill period in order to possibly reduce the effect of long dry periods in summer.)

11. Wheat may be in flower when interseeding. This will not significantly harm wheat as long as it is not run down (there may be a small interseeding effect on wheat yield in some years; see above for 2014). Spreaders, steel rods bent into a V shape, attached to the tractor and/or the planter should be considered in some MRI systems that will spread the wheat at planting and allow the equipment to pass without running over the wheat.

12. A very significant problem in the MRI system is soybean damage from harvest of the wheat. Both the SC data and North Central Ohio data have this factored into the plot yields in 2014. The larger the soybeans are at wheat harvest, the more susceptible to injury or damage from the combine wheel traffic. Soybean stand loss may occur in the area run over by the combine tires.