Texas A&M AgriLife Research scientists are wrapping up a 2-year study to determine the best combination of corn hybrids, planting dates and maturity to maintain yield and maximize water-use efficiency.

“The overall goal of this study is to determine if we can save more irrigation water when growing corn,” Xue said. “We want to identify our best treatment to use as little irrigation water, as well as sustain the grain yield and maximize the water-use efficiency.” 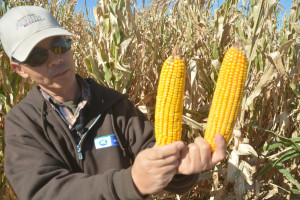 He said they are looking at late planting dates from mid-May to June. Historically, corn is planted in the High Plains from late April to early May, but there is little data on the late planting of corn.

Xue said the corn this year was planted on May 15, June 1, June 15 and July 1, and six different hybrids considered full-season, mid-season and short-season with maturity dates ranging from 115 days to 95 days were being evaluated.

The 2013 results indicated that high yields of 200 bushels per acre can be achieved with long-season hybrids of at least 115 days, when planted in late May and early June, he said.

“We wanted, though, to look at how the different hybrids respond in terms of yield and irrigation and see if we can use the short-season hybrids to save some irrigation water,” Xue said. “While we are still finalizing this year’s data, last year we determined that we can save from 3-5 inches of irrigation water.

“If you plant in June, you may be able to delay your irrigation two or three times if you catch the rain, which ties into our overall goal of better utilizing the natural rainfall and the use of irrigation.”

The total water use includes the rainfall as well as irrigation and stored soil water, he said.

“This year, with very good precipitation, a producer probably could have delayed irrigation two to three times, which easily can add up to 6 inches of irrigation water savings per season. If you count pumping costs also, that can be a considerable savings.”

He said when looking at the study in terms of yield, the short-season hybrids have a lower yield potential, producing about 150 bushels of corn per acre.

“But they allow you to use probably 5 to 6 inches less water,” Xue said. “Also, the short-season hybrids provide some operational benefits and flexibility. If your well is at low capacity, using a short-season hybrid allows you to grow corn and maximize use of normal seasonal rainfall as well as irrigation water and soil water storage.”

Xue said data from 2014 will be summarized and then they will determine how the hybrids responded in the different years and identify the best hybrids to recommend to the producers from the 2-year averages.

What's the Best Use for Drought-Stricken Corn?

Nitrogen Use By Corn: How Much, When, Where And Why (NNTC 2010 Presentation)- MP3 Download