South Africa’s water scarcity — and the need to import well over 1 million tons of wheat annually — mean that the country’s winter wheat growers increasingly have to optimize their water-use efficiencies.

But South Africa’s Egon Zunckel recently told Farmer’s Weekly about his family’s own efforts to achieve higher wheat yield from less water. Zunckel, a former National No-Tillage Conference speaker, and his sons Tyson and Carl, have been no-tilling their commercial mixed-grain operation since 1996.

They produce irrigated winter wheat on about 300 acres in rotation with both irrigated and dryland summer crops, typically comprising two-thirds yellow maize and one-third soybean.

South Africa’s largest wheat-producing region, the Western Cape, receives the bulk
of its annual rainfall in autumn and winter, the growing season. By contrast, most of Rustenburg’s 50-year average annual rainfall of 850mm falls in spring and summer. This makes it essential to irrigate winter wheat crops strategically.

Zunckel says that before they introduced no-till, the farm’s predominantly Avalon-type arable soils had been prone to capping, poor moisture infiltration, and high water runoff and associated soil erosion.

Collectively, these problems were a major contributor to sub-optimal production across all of the family’s commodity crops. However, after only 10 years of no-till, in combination with covering soil surfaces with living or dead crop residue, the family were able to double the average level of beneficial soil carbon from approximately 1.4% to 3%.

This, according to Zunckel, is similar to the average soil carbon level of virgin soils in the Bergville area. Rustenburg’s average soil organic matter level is approximately 6%.

In addition to their direct benefits, the cover crops are grazed by the family’s 300-head breeding cow Bonsmara-type and Bovelder-type commercial beef herd. The cattle’s dung, urine, saliva and hoof action also improve the soil, and the Zunckels generate additional farm income from the beef.

“We’re increasing the organic and clay colloids, which enhances the soil’s water and nutrient retention characteristics,” Zunckel says. “In effect, we’re creating a bigger ‘bucket’ under the soil surface that can capture and retain more water from rain and supplementary irrigation. It’s especially important to retain as much late summer and autumn rainfall as possible so that this is available for the following winter wheat crop.”

He also says residue from commercial and cover crops promotes irrigation water penetration and retention in the soil — “but it must be allowed to dry off before wheat planting starts,” he notes.

Some Romanian farmers interested in making their farms more sustainable to fight climate change can also get financial benefits by getting better crops and selling carbon certificates on the international markets.

By adapting their tillage and cultivation techniques and making the transition to conservation agriculture, farmers can earn an additional $20-$50 per acre per year by capturing carbon in the soil. Many are utilizing Commoditrader, a digital trading platform for agricultural commodities, which helps farmers get additional revenues by selling carbon certificates on the international market.

French-born Arnaud Perrein, vice-president of the Romanian Corn Producers Assn., adopted such measures on his 9,800 acres of land at Sopema Farm in Lalomita County, in Romania’s most fertile region. They only plow 500 acres of their total farm acres.

“We decided to make the transition from traditional to conservation agriculture primarily out of personal beliefs, because we want to leave something good behind for future generations and then because, personally, I am open to experimenting, losing or gaining through agriculture I practice," says he says.

On the surfaces he works he has hard and clay soil, worked deep, which forced him to do less tillage. However, he also has areas with very light, sandy lands, where he encounters problems due to wind erosion. This forced him to change the way he is farming, adopting new techniques.

“We evolve on all sides — spraying, paying attention to the fertilizers used and the cultivated varieties. We leave the land as little uncovered between two crops as we can, and we get a complete result of several measures taken. Every year we have better and better production and we earn more per hectare,” he adds. “We hope that the green crops we have will help us in time to develop the qualities of the soil and to cultivate these lands more easily.”

Clock Ticking on the World’s Soils?

A major new international study has provided a first worldwide insight into how soil erosion may be affecting the longevity of our soils.

Led by Lancaster University in the UK, in collaboration with researchers from Chang’an University in China and KU Leuven in Belgium, the study brought together soil erosion data from around the globe, spanning 255 locations across 38 countries on 6 continents. The data was used to calculate how long it would take for the top 30 centimeters of soil to erode at each location.

The study included soils that are conventionally farmed, as well as those managed using soil conservation techniques, to find out how changes to land use and management practices can extend the lifespans of soils.

Researchers found more than 90% of conventionally farmed soils in the study were thinning, and 16% had lifespans of less than a century. These soils were found all over the world, including Australia, China, the UK and the U.S.

But there is cause for optimism. In the data, soils managed with conservation strategies tended to have longer lifespans, and in some cases these practices promoted soil thickening. Only 7% of soil under conservation management had lifespans shorter than a century, and nearly half exceeded 5,000 years.

Sticking with the Plan

Andy Howard, who raises linseed on his farm near Kent, England, says his local wildlife officer called him recently to ask if his regenerative practices provided higher yields compared to other farms.

Howard said probably not, “but it cost me less to get the yields we achieved, our soils are in good heart and don’t need a lot of expensive remediation,” he told Direct Driller magazine. “This is unlike others who planted in adverse conditions last fall and have been left with compaction and ruts.”

Last June, Howard had planted strong-rooting cover crops to repair his soils after farming in tough weather. He’s come to realize covers play an important role on his farm, as he’s seen other farmers report their best establishment of later crops were planted on volunteers or catch crops. 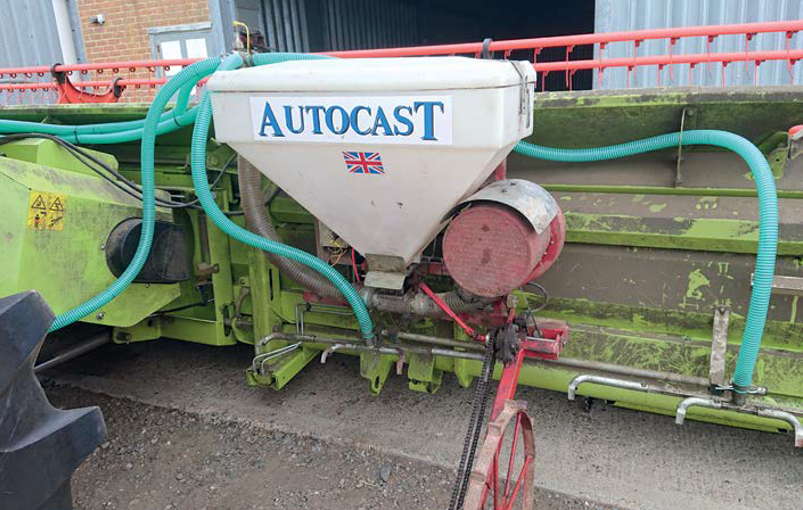 Since he doesn’t have the labor available to follow the combine with a drill, he bought a secondhand Autocast seeding unit for his combine, which was fitted onto the header just in time for harvest. Autocasting needs moisture, which is something he says was lacking at harvest and for a couple of weeks after.

“For a while I thought my new idea was going to fail. Luckily towards the end of August it rained and now we have a crop,” Howard says. This year he planted a 10-way mix and will assess what grows and doesn’t.

First out the blocks was buckwheat and linseed, quickly followed by phacelia and Berseem clover. He also got covers drilled in after winter barley in a field going to winter barley again, with the hope the new plants will break disease cycles.