Check Out These New No-Tilling Ideas From Fall Farm Shows

By Frank Lessiter posted on November 1, 1998 | Posted in Cover Crops

With fall harvest running several weeks ahead of normal through much of the Corn Belt, crowds declined at several major farm shows this year.

A number of suppliers at the Farm Progress Show in Windfall, Ind., indicated they expect to be discounting machinery to boost sales this fall and winter.

Strip Till Or Not?

Larry and Ron Lukow of Chebanse, Ill., were checking out strip-till units at the Indiana show.

“Manu­facturers and local dealers say these units will boost returns from no-tilled corn, but there aren’t any demonstration units in our area to try on a few acres of our farm to see if the idea really works for us.” 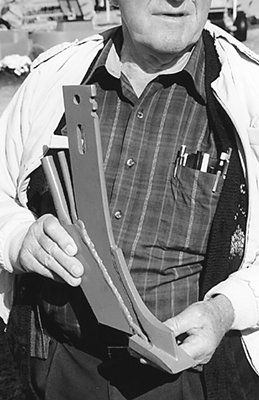 The two brothers tried an AerWay renovator for increasing water infiltration on their no-tilled 1998 crop. After investing $28,000 in this unit, they actually harvested 2 bushels less corn per acre where the rig was used in their own on-farm trial.

While driving to the Indiana show, Larry Lukow was amazed at the sizable number of acres which had already been fall tilled by late September. “People who try no-till and find problems are too quick to conclude fall tillage is the answer,” he adds.

Terry Metzger of Ag Spectrum in Clinton, Iowa, maintains more machinery manufacturers should sell no-till planters and drills without certain accessories. This would enable buyers to add valuable after-market attachments at a reasonable price. He says Kinze is one of the few manufacturers which will build an “incomplete” planter for a customer.

Speaking of options, a representative at the John Deere exhibit pointed out they can build 6.6 million planters before having to ever construct the exact same model twice.

“I can learn what the major players are offering back home, but you don’t always hear about new products from smaller companies,” he says. “I always go out of my way at shows to see what they have new to offer for no-tillers.” 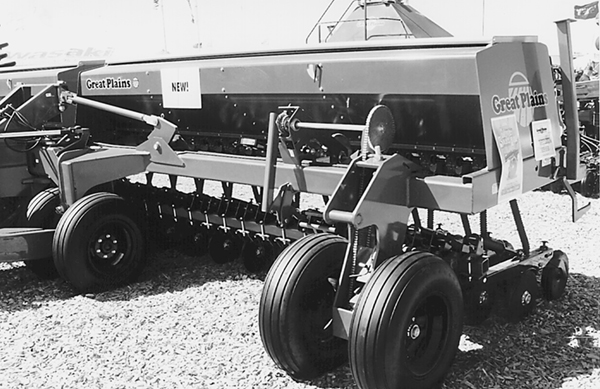 A walk through the Farm Progress Show exhibits didn’t indicate much interest among seed companies or machinery manufacturers for 15- or 20-inch corn rows. However, a number of farmers were checking out the White planter for 15-inch row soybeans.

Two Crops At Once

At the California-based Intellicoat Corporation, the parent company of Fielder’s Choice corn hybrids of Monticello, Ind., Ray Stewart is perfecting a temperature-activated polymer seed coating. The coating may make it possible to more effectively intercrop soybeans with winter wheat and grow both crops at the same time.

Other applications of this new coating technology include earlier planting of corn hybrids and soybean varieties along with possible encapsulation of chemicals, insecticides and fungicides right on the seed.

“Calcium forces the air molecules apart so nutrients can get into the soil,” he says. “On the other hand, magnesium smears the surface of the soil and keeps nutrients from getting into the soil particles.”

One problem farmers often have is no-tilling soils with high magnesium levels. “Some farmers give up on no-till too fast when the soil gets so hard,” he says. “It takes patience and paying close attention to nutrients to make no-till work.”

Howard Martin of Martin & Co. in Elkton, Ky., maintains no-tillers are losing interest in planter attachments. “They’ve been hit over the head so many times with accessory ideas that it’s getting hard to pique their interest on ideas that can make a real difference,” he says.

Representatives of Hi-Pro Manu­facturing Co. in Watseka, Ill., say their newly-designed B-33 mole knife is the best bet for strip tilling when accompanied by an 18- inch double disk coulter.

Herb Stan says this knife, which features a 1 1/2 inch wide horizontal “foot” at the bottom that lifts the soil and breaks it over a 4 to 5 inch wide area, creates tighter sealing by closing from the bottom up. 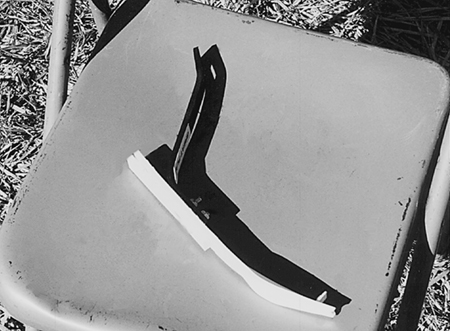 Within the next several months, Paul Schaffert of Schaffert Manufacturing Co. in IndianolW, Neb., says the firm will soon have its highly-popular Rebounder units for seed firming available in new models for no-till drills.