Turn Your No-Till Farm Into A Big-Yield Operation

By Michael Austin posted on June 1, 2002 | Posted in Nutrient Management

Get bigger no-till yields while doing as little as possible.

Getting the highest return from the least amount of work is the goal of any good no-tiller because it creates more free time to spend with your family or time to develop better ways of no-tilling.

This is Jeff Martin’s philosophy and the Mt. Pulaski, Ill., no-tiller doesn’t understand why conventional tillage farmers want to waste their precious time and money when they could be doing just as well or better with no-till.

Even though Martin says he will never use a plow, he wanted to find some tricks from the tillage side of farming to use in his no-till operation. Martin has spent quality time with champion corn grower Francis Childs, from Manchester, Iowa, who has seen corn yields as high as 408.21 bushels per acre, and shared some observations with an attentive audience at the recent National No-Tillage Conference.

“There’s no magic to any of this,” Martin says about increasing no-till corn yields on his farm. “It’s just a lot of little things that add up that can significantly increase corn yields.”

After a few consecutive spring seasons that were wetter than normal, Martin decided to experiment with strip-tilling due to the severe residue management problems he was experiencing.

At first, he found it difficult to strip-till with anhydrous during the fall season because the window of opportunity was too short. Weather problems and covering large numbers of acres caused Martin to rethink his plan.

He wanted a program that would be successful in both the spring and the fall, so he came up with a modification of the anhydrous-based strip-till unit.

“We cleared a bare strip of ground with a row cleaner on the no-till corn planter,” Martin explains. “After 3 to 4 years of side-by-side testing, just using the bare strip offered several economic advantages over the fall strip-tilling with anhydrous. 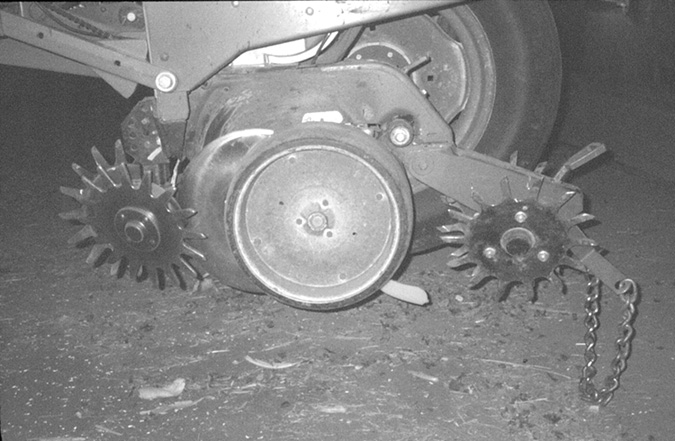 “With our no-till corn planter stripped down, we can cover several hundred acres a day and it costs us about one-quarter of a gallon of diesel fuel per acre.

“And, we move just enough soil to mix in with the residue to help hold it in place.”

This strip-tilling program works because sunlight can hit the ground and warm up the no-till soil more quickly. Martin has done tests to conclude that the soil in the bare strip is 2 to 3 degrees warmer, which allows more even no-till seeding emergence.

He’s convinced this unique strip-tilling system is the best way to go because it doesn’t require any new equipment, which is a huge money saver.

“You can use your existing equipment,” Martin says. “We strip down our corn planter to just the row cleaner and gauge wheels in the fall. This helps avoid excessive wear on the discs and other parts of the planter and it gives it a little less weight.

“To experiment with this, you can strip with your no-till planter. Just set your planter on the shallowest notch and adjust your row cleaners to get the proper depth operation for your residue,” he says.

Along with the higher yields at no extra cost, the environmentally-conscious Martin is pleased to report that in the 10 years he has been fall strip-tilling, he has not seen any erosion problems. If no-tillers are concerned about fall erosion, this system works just as well in the spring. As for spring stripping, Martin recommends giving the bare soil a half-day of sunshine and wind before no-tilling.

Martin has had success with this low-cost strip-tilling system in both a corn and soybean rotation and in a continuous corn rotation. His top corn yields in each of the last 2 years have come in this system.

Martin uses a John Deere 7200 planter that’s equipped with Keeton seed firmers, which he says helps with more even seed emergence. He applies pop-up fertilizer and Regent insecticide with the seed firmer. He also uses a spiked Martin spade wheel as his closing wheel.

“If we have any sidewall compaction from the disc, the spading wheel knocks it out,” he says. “And, we’ve found the soil to be 1 to 2 degrees warmer where we’re loosening it up and getting a little more air in there. So, we’re getting a little faster emergence.”

Martin carries tanks for the Regent insecticide and starter fertilizer on the tractor to limit the amount of no-till planter down pressure used to get the seed into the ground.

“I just can’t understand why conventional farmers rip up the ground in the fall, come back in the spring and make three passes to get the same seedbed that I get by doing almost nothing,” Martin wonders.

On Martin’s farm, they sidedress with a 40-foot wide toolbar. Using a thin knife, the nitrogen is applied 2 to 3 inches deep while moving very little soil.

“A big concern with sidedressing is that the corn is going to get knee-high and I’m not going to get it done before the corn is too tall,” Martin explains. “With this rig, we can follow the no-till corn planter an hour later and start sidedressing because it doesn’t throw any dirt into the row. Or if the seed is small, it doesn’t throw any dirt on the seedling.” 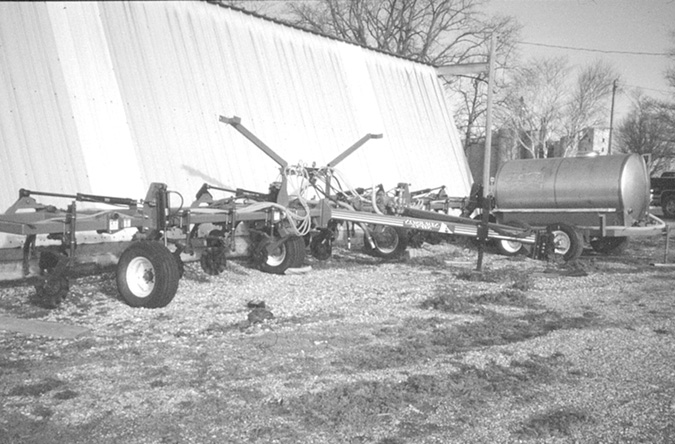 By sidedressing, Martin uses less nitrogen, which saves him money.

“Twenty-eight percent (nitrogen) compares favorably with fall-applied anhydrous with N-Serve,” he mentions. “We use approximately 50 gallons of 28 percent nitrogen per acre.”

He has experimented with 35 to 40 gallons of nitrogen and has seen the same yields as the 50-gallon rate.

Along with the financial advantages of sidedressing, Martin points out that another reason to try this system is the uncertainty of what the condition of the corn crop will be. Yield goals will be different for crops planted on May 25 instead of April 1. With sidedressing, Martin can adjust his nitrogen rates accordingly.

Martin’s no-till soybean program is as simple as spraying, planting and harvesting. “I don’t understand why everyone in the world doesn’t do it,” Martin says of his system, which has him no-tilling into standing stalks, spraying, planting and harvesting. “I see no reason why this shouldn’t be done. With today’s technology, no-till planters or drills and chemicals, it just works.”

The fertility program on Martin’s farm, for his corn and soybean rotation includes 1 ton of ag lime broadcast on the stalks every other year or when soil tests call for it. He also applies phosphorus and potassium on top of the stalks in the fall.

As for the corn-on-corn rotation, Martin stays away from using 28 percent nitrogen. “We’ve been using ammonium sulfate because we’ve had a harder time sidedressing in the residue,” he says. “We’ve been experimenting with combining starter fertilizer and Regent insecticide because it’s important to get no-till corn off to a great start.”

The plant will be getting off to a fantastic start and Martin will once again be saving money.“This is a very economically based program with a very low power requirement,” he says. “We farm 3,000 to 3,800 acres each year and we sidedress and row clean with our John Deere 4440 tractor, which is 22 years old. We no-till corn and soybeans with a John Deere 4640 tractor, which is 22 years old. We bought a third tractor this year in order to no-till corn and soybeans at the same time.

“We have low fuel and low labor costs per acre and we make very few trips across the field. The new farm program is going to have incentives for conservation techniques. Hopefully, we’re going to get some dollars for doing the things we’ve been doing for a long time.”