Sampling For Nematodes In Corn

Nematodes are simple roundworms that exist in the soil. Some species can be parasitic in crop production and their feeding on plant root systems can cause yield losses. 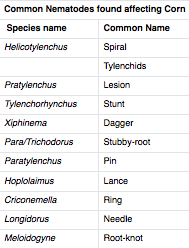 We are familiar with soybean cyst nematode, which is specific to soybeans and is a single species of nematode that can be seen with the naked eye as a pinhead sized lemon shape on the root system.

When we discuss nematodes on corn, we are in fact talking about a variety of species that feed externally or internally on the root system and they cannot be seen without a microscope after specialized processing.

To confirm potentially damaging nematodes in corn, samples that contain both soil and root systems need to be submitted. To get a good sample for analysis, proper sample timing and handling during sampling and transport are critical.

Losses from nematodes are common but very difficult to detect. Above ground symptoms are usually noted as uneven growth in circular areas.

Since uneven growth can be attributed to a variety of factors such as soil type, soil compaction, soil-borne pathogens, poor drainage, poor fertility and herbicide carryover, nematode problems may go undiagnosed.

Root symptoms may include stunting, clubbing and other abnormal root growth. Since nematodes feed on the root systems, their injury can lead to infections by other soil-borne pathogens. In cases where corrective management, such as adjustment of fertility, removing soil compaction etc., have been used and yields have not responded as expected, it may be  worthwhile to submit a sample for nematode testing.

Nematodes are most likely to cause problems in no-till or corn-on-corn fields and all soil types can be affected.

Nematode sampling in corn is best done at growth stage V3 to V6 (or approximately 20-30 days after planting). This stage gives the best overall counts of all species of nematodes. Samples should be taken with a 1 inch probe, 12-20 inches deep under the row of corn and do not break up the soil cores.

The soil and root system parts are needed for a good sample. Sample the edges of hot spots or use a zig-zag pattern for random field sampling.

Take 20 cores: treat cores gently, do not break cores up, do not dry the sample and place a subsample in a quart sized plastic bag. Keep the sample moist so the soil does not dry out. Label each bag in large letters with a permanent marker. Keep the samples cool.

These sampling guidelines are based on research and agreed upon by a consortium of nematologists from the North Central states including Ohio, and the “garbage in – garbage out” rule applies.

Pack the samples in a cooler or insulated box for shipping. Put a sheet with name, address, phone number and e-mail of the farmer. Record the sample code with previous crop. If the sample is from multi-year continuous corn, note the number of years.

Sampling For Nematodes That Feed On Corn