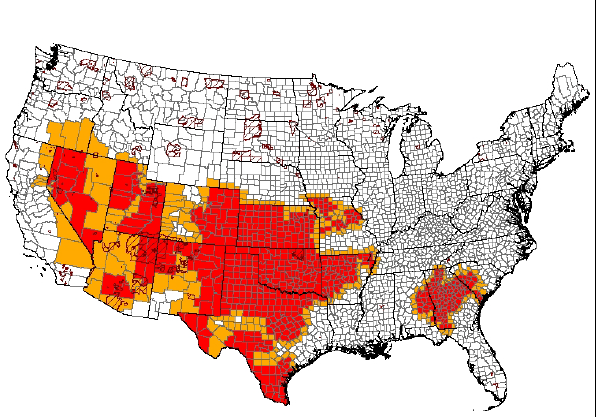 Agriculture Secretary Tom Vilsack this week designated 597 counties in 14 states as primary natural disaster areas due to drought and heat, making all qualified farm operators in the areas eligible for low-interest emergency loans.

These are the first disaster designations made by the U.S. Department of Agriculture (USDA) in 2013.

The 597 counties have shown a drought intensity value of at least D2 (Drought Severe) for eight consecutive weeks based on U.S. Drought Monitor measurements, providing for an automatic designation.

In 2012, USDA designated 2,245 counties in 39 states as disaster areas due to drought, or 71 percent of the United States. At the height of the 2012 drought, the Secretary announced a series of USDA actions to get help to impacted farmers, ranchers and businesses, and many of those same actions continue to bring relief to producers ahead of the 2013 planting season, including:

•Simplified the Secretarial disaster designation process and reduced the time it takes to designate counties affected by disasters by 40 percent.

•Transferred $14 million in unobligated program funds into the Emergency Conservation Program to help farmers and ranchers rehabilitate farmland damaged by natural disasters and for carrying out emergency water conservation measures.

• Updated the emergency loans application process to allow these loans to be made earlier in the season.

Visit www.usda.gov/wps/porta/usda/usdahome?navid=DISASTER_ASSITANCE for the latest information regarding USDA's drought response and assistance.

The 597 primary counties designated as disaster areas this week correspond to the following states:

Wheat Planting In Danger Due To Drought