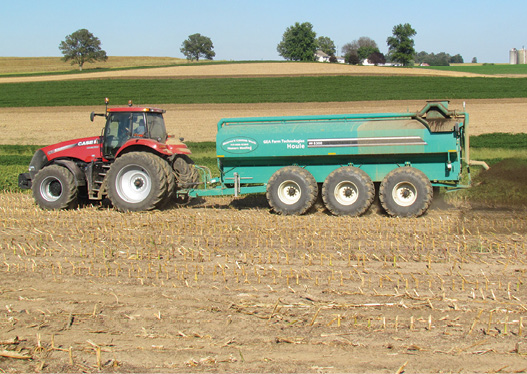 A few years ago while planting double-crop soybeans, David Wolfskill got out of his tractor, walked into one of his adjacent cornfields and noticed the ground was completely bare.

There was some soybean residue remaining, but a recent application of straw and manure had mysteriously disappeared. Curious, Wolfskill grabbed some manure and spread it out between two cornrows. He came back at 1-week intervals to see what would happen.

“It went into the ground and was digested,” says Wolfskill, whose Mar-Anne Farms have been Wolfskill, who no-tills 1,800 acres of corn, soybeans, barley, alfalfa and wheat near Wernersville, Pa., broke through the 300-bushel yield barrier in corn last year for the first time. He is building a high-yielding no-till system that relies on manure application, in-furrow and in-row fertility treatments and accurate seed placement.

In good years, his across-the-board corn yields average 200 bushels per acre or more. But in 2012, even with some dry conditions that curled up his corn, Wolfskill finished second in the National Corn Growers Association Yield Contest in the Class A No-Till/Strip-Till Non-Irrigated category with 307 bushels per acre — with the first check coming in at 318 bushels.

Wolfskill believes in the oft-cited farming mantra that each bag of corn seed has the potential for 400 bushels, with the final yield slowly diminished by poor weather, pests and…