Performance of many foliar-applied soybean herbicides has been challenged by the adverse environmental conditions common across much of Illinois. Weeds that survive an initial herbicide application are often resprayed, with the same herbicide or a different one.

The likelihood of controlling larger, moisture-stressed weeds at this point in the growing season continues to decline, for myriad reasons. Apart from that, be reminded that late-season herbicide applications increase the probability that herbicide residues will persist long enough to injure sensitive rotational crops.

Nearly all herbicide labels (soil-applied and postemergence) specify the time that must elapse between herbicide application and planting of a rotational crop.

The rotational crop intervals become particularly important with late-season herbicide applications and when soil moisture is limited. The intervals are established to reduce the likelihood that herbicide residues will persist in sufficient quantities to adversely affect the rotational crop.

Some restrictions are based solely on time, while other factors, such as soil pH and the amount of precipitation received after herbicide application, can influence the length of the intervals.

Also, dry soils can enhance herbicide adsorption to soil colloids, rendering the herbicide unavailable for plant uptake and degradation by soil microbial populations. Some herbicide rotational intervals are increased if a specified amount of precipitation is not received by a certain date.

Preharvest intervals indicate the time that must elapse between the herbicide application and crop harvest. Failure to observe the preharvest interval may result in herbicide residue levels in the harvested portion of the crop exceeding established limits. 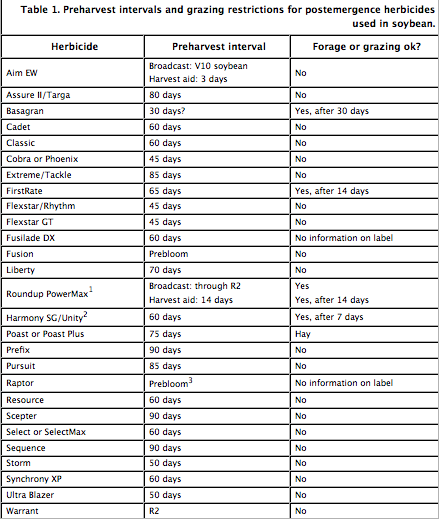 Can Weed Seed Production be Reduced with Late-Season Herbicide Applications?