Drought Spreads Across Some U.S. Regions

Weather Summary:   A cool front brought showers and thunderstorms to the central and northern Plains and Upper Midwest early during this U.S. Drought Monitor (USDM) week, but it weakened as it scraped against high pressure over the eastern U.S., dropping minimal precipitation in the Ohio Valley.  Another front brought limited rain later in the period.  Tropical Storm Debby inundated Florida with flooding rains beginning Saturday, June 23. 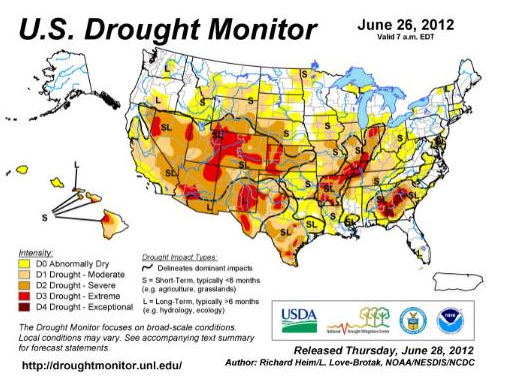 Areas of rain peppered the Northeast and Mid-Atlantic States as the fronts limped eastward.  An upper-level trough brought waves of rain to parts of the Pacific Northwest and extreme northern Rockies, and small areas of very light convection developed in the Southwest as the summer monsoon tried to get started.  Otherwise, upper-level high pressure dominated with hot, dry, and windy weather blanketing much of the West and central Plains.  The hot and dry air mass spread eastward as the week progressed.  It was a drier-than-normal week for Puerto Rico but the precipitation pattern was mixed for Alaska and Hawaii.

The Northeast and Mid-Atlantic:  Areas of showers and thunderstorms moved across the Northeast this week with rains locally over 2 inches along the coast and in Maine.  Above-normal rain fell over the D0 (abnormally dry) areas of Massachusetts and Connecticut, but it was not enough to ease long-term deficits.  The week was drier than normal further inland.  With above-normal temperatures and limited rainfall, topsoil moisture continued to decline in most states.

According to June 24 reports from the U.S. Department of Agriculture (USDA), 55% of the topsoil in Maryland was short or very short (dry or very dry). Spots of D0 were added to southeast New York and northern Vermont-northeast New York where deficits from 7 days to 6 months were greatest.  D0 and D1 (moderate drought) expanded into the Washington, D.C. area and adjacent northern Virginia where rainfall has been spotty, deficits abound, and yard impacts were being reported.  D0 expanded in central and south central Virginia.

The Southeast and Deep South:  Tropical Storm Debby dropped 5 inches or more of rain over most of the Florida drought areas, with widespread 10+ inch storm totals.  Up to 23 inches of rain was reported by a CoCoRaHS observer in Wakulla County.  The tropical inundation all but eliminated drought from Florida.  Only a small patch of D0 (with an L impact designation) remained along the southwest coast where Debby’s rainfall totals of only an inch or two did little to eliminate deficits which have accumulated over several months.  D0 also remained over parts of the Florida panhandle.  Extreme southern and southeast Georgia received rain from the northern edge of Debby, with pullback of the southern edge of the D0-D4 (exceptional drought) areas.

Soaring temperatures and little to no rain expanded drought across other parts of the Southeast.  Temperatures consistently topped 90 degrees Fahrenheit by the end of the USDM week across northern parts of Alabama and Georgia, baking the dry soils.  Topsoil moisture content declined 30 to 40% compared to last week in the Gulf Coast states, exceeding 50% short or very short by June 24 in Mississippi (64%), Alabama (59%), and Georgia (53%).  D0-D4 expanded in Georgia, and D0-D3 (extreme drought) expanded in Alabama.

D0 expanded in central North Carolina and in the Southern Mountains of North Carolina, where stream and groundwater levels were low, and in Upstate South Carolina.  The shifting drought boundaries and growing short-term deficits resulted in the L drought impacts area in the Southeast being changed to SL impacts.

The Deep South states of Mississippi and Louisiana saw expansion of D0 and D1 (moderate drought).   D2 (severe drought) grew in northern Louisiana.  Arkansas experienced expansion of D1-D2 and the appearance of several D3 areas.  D1-D3 grew slightly in southern Missouri.  In Arkansas, June 24 USDA reports rated 89% of the topsoil short or very short and 73% of the pastures and range land in poor or very poor condition.

The Midwest and Tennessee Valley:   Showers in the Upper Midwest brought relief to some drought areas.  But further to the south, it was another dry week with 90+ degree temperatures which continued to dry soils, stress crops, and lower stream levels, with abnormally dry and drought conditions expanding over a large area.  D1-D3 grew from Tennessee to Indiana and Illinois, D1 expanded in Ohio, and D0 expanded into southern Wisconsin and eastern Tennessee and slightly in West Virginia.

An oval of D1 was introduced to northeast Tennessee-southwest Virginia and to southern Wisconsin-northern Illinois.  Expansion and contraction of D0 occurred in Wisconsin and of D0 and D1 areas in Iowa. Beneficial 1-2 inch rains shrank the D0-D1 in Upper Michigan and the D0 areas in Minnesota.

USDA reports indicated a rapid deterioration in pasture and rangeland condition, with the poor to very poor percentages in several Ohio Valley states jumping 10 to 20% in the past week and 30 to 45% in the past 4 weeks. As of June 24, more than half of the pastures and range land were rated in poor to very poor condition in Missouri (58%) and Indiana (60%), and nearly half in Illinois (49%).

For a second week in a row, bands of heavy thunderstorms moved across southeast Nebraska to northeast Kansas. The 1-3 inch rains (and locally 3+ inches in northeast Kansas) trimmed the D1-D2 areas, but elsewhere widespread expansion of D0-D2 occurred in Nebraska and D1-D3 in Kansas. To the south, D0-D3 expanded across parts of Oklahoma and Texas, and to the north, D0 expanded in North Dakota.  South Dakota had both expansion (where it continued dry) and contraction (where beneficial rains fell) of D0-D1. The L/SL impacts boundary in Texas was moved westward.

The West:  Pacific fronts associated with an upper-level trough brought an inch or more of rain to the coastal areas of Oregon and Washington and lesser amounts further inland this week, and a few tenths of an inch of rain fell with scattered showers over the Four Corners States, but otherwise the West continued bone dry.  By the end of the week, temperatures topped 100 degrees from Tucson, Arizona to Glasgow, Montana.

The tinder-dry conditions, hot temperatures and gusty winds fanned wildfires across the West, from New Mexico to Montana and California to Colorado, with twice as many large wildfires burning by the end of the week as at the beginning.  June 24 USDA reports indicated most of the topsoil in New Mexico (93%) and Colorado (90%) was rated short or very short of moisture, with over half so rated in Wyoming (73%) and Utah (63%).

SPI values, at time scales from 30 days to 12 months, were in the D4 equivalent category in many areas across the West.  To reflect these conditions, a general one-category degradation of the USDM D0-D2 areas was made across Colorado, with D0-D2 expanding across Wyoming. D2 –D3 expanded across parts of the Intermountain Basin.  D2 expanded in New Mexico, D0-D1 in Montana, and D0 in southeast Idaho.  The SL/S impact boundary in north central Utah was shifted north.

Hawaii, Alaska and Puerto Rico:  Continued below-normal precipitation, combined with above-normal temperatures, below-normal streamflow and spreading large wildfires, contributed to the expansion of D0 into northeast and east central Alaska.  It was another drier-than-normal week for Puerto Rico, but streamflows continued generally near normal, so the island remained free of a drought or abnormally dry designation.  The rainfall pattern in Hawaii was mixed, with many windward stations receiving 3 inches or more of rain while the leeward stations were drier than normal with only a few tenths of an inch of rainfall.  No new drought impacts were reported, so no change was made to the drought depiction.

Looking Ahead: During the June 28-July 2, 2012 time period, a high pressure ridge is forecast to dominate the central and eastern United States.  Showers and thunderstorms may develop along the northern and western fringe of the ridge, bringing a chance for rain to states in an arc from New Mexico to the Dakotas to Ohio, with the greatest chance for half an inch or more total from eastern Nebraska to northern Illinois.

Rain is possible in the Pacific Northwest and in the Northeast, southern Texas, and southern Florida.  Otherwise, conditions will be very dry.   Very hot temperatures will affect most of the country from the Intermountain Basin to the East Coast.  This temperature pattern is expected to continue for July 3-11, with below-normal precipitation stretching from the Intermountain Basin to the central and southern Plains, across the Midwest, to the interior Northeast.

Above-normal precipitation may occur over New Mexico, from coastal Florida to South Carolina, and (early in the period) over the Upper Mississippi Valley.  Northern Alaska is expected to be drier and warmer than normal, and southern coastal Alaska wetter and cooler than normal.