Across wide swaths of Iowa and other Corn Belt states, the rich, dark soil that made this region the nation’s breadbasket is being swept away at rates many times higher than official estimates.

That is the disturbing picture revealed by scientists tracking soil erosion in Iowa after every storm that hits the state and producing an unprecedented degree of precision in soil erosion estimates. The Environmental Working Group corroborated the scientists’ findings with aerial surveys that produced striking visual evidence of the damage. 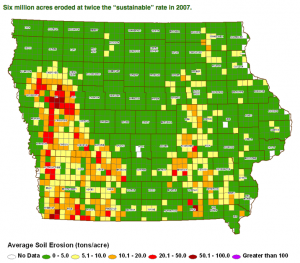 On the surface, the data from the 2007 National Resources Inventory (NRI) were reassuring. Erosion in Iowa averaged 5.2 tons per acre per year, only slightly higher than the allegedly “sustainable” rate of 5 tons per acre per year for most Iowa soils — the amount that can supposedly be lost each year without reducing agricultural productivity.

Across the entire Corn Belt, erosion averaged only 3.9 tons per acre per year, according to the NRCS data.

There is compelling evidence, however, that soil erosion and runoff from cropland is far worse than these estimates suggest. Indeed, it appears that the nation is losing ground in the decades-old fight to gain control over this most fundamental and damaging environmental problem in agriculture.

In some places in Iowa, recent storms have triggered soil losses that were 12 times greater than the federal government’s average for the state, stripping up to 64 tons of soil per acre from the land, according to researchers using the new techniques.

Six million acres erosed at twice the "sustainable" rate in 2007.