Pinhook Farm of Clarinda, Iowa, has been selected as the recipient of the inaugural Iowa Leopold Conservation Award.

Seth, Christy, Spencer and Tatum Watkins were presented with the $10,000 award at The Big Soil Health Event in Cedar Falls. 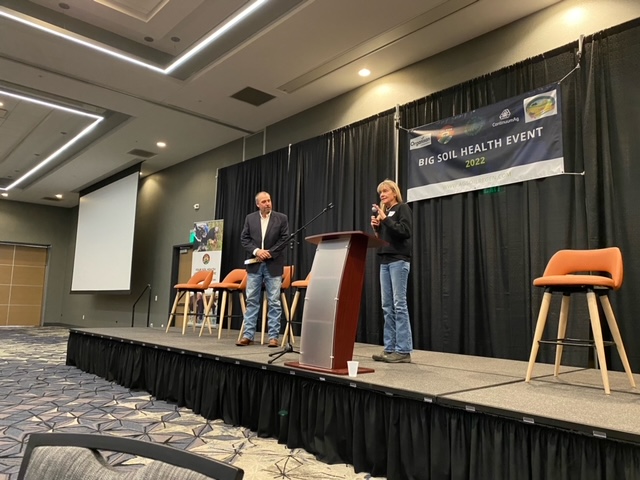 The Watkins family owns 320 acres and rent another 2,790 acres to grow the grass, hay and corn needed to feed their herd of 600 beef cow-calf pairs. Seth also manages about 900 acres of crops, prairie, and forests for other landowners across Page, Taylor and Adams counties.

Given in honor of renowned conservationist Aldo Leopold, the prestigious award recognizes farmers, ranchers, and forestland owners who inspire others with their dedication to land, water, and wildlife habitat management on private, working lands.

“Pinhook Farm is a worthy first recipient of this award in Iowa,” said Sally Worley, Practical Farmers of Iowa Executive Director. “All of Iowa’s inaugural class of applicants are inspiring examples of conservation in action on farms. We’re grateful to the Sand County Foundation for bringing the Leopold Conservation Award to Iowa. It’s important that we continue to recognize and lift up the Iowa farmers and ranchers who are prioritizing conservation on their working lands.”

“The landowner plays a critical role in the conservation of America’s farmland resources. Sustainable practices not only benefit the local environment and community, but also improves the quality and value of the land as an asset for the current owner and future generations,” said Clayton Becker, Famers National Company President. “This is why Farmers National Company is honored to sponsor this prestigious award recognizing hard work and commitment to conservation.”

“All of the nominees for the inaugural Leopold Conservation Award in Iowa truly exemplify family farming and caring for the land. One look at what the Watkins family has done provides an impressive goal for other farmers,” said John Whitaker, Conservation Districts of Iowa Executive Director.

“Recipients of this award are examples of how Aldo Leopold’s land ethic is alive and well today. Their dedication to conservation shows how individuals can improve the health of the land while producing food and fiber,” said Kevin McAleese, Sand County Foundation President and CEO.

“As the national sponsor for Sand County Foundation’s Leopold Conservation Award, American Farmland Trust celebrates the hard work and dedication of the Watkins family,” said John Piotti, AFT President and CEO. “At AFT we believe that conservation in agriculture requires a focus on the land, the practices and the people and this award recognizes the integral role of all three.”

Earlier this year, Iowa landowners were encouraged to apply (or be nominated) for the award. Applications were reviewed by an independent panel of agricultural and conservation leaders. Among the outstanding Iowa landowners nominated for the award were finalists: Vic and Cindy Madsen of Audubon in Audubon County, and Loran Steinlage of West Union in Fayette County.

The Leopold Conservation Award is given to farmers, ranchers and forestland owners across the U.S. in honor of renowned conservationist Aldo Leopold. In his influential 1949 book, A Sand County Almanac, Leopold called for an ethical relationship between people and the land they own and manage.