Fall armyworm, Spodoptera frugiperda, (Figure 1) is known to feed on over 80 host plants. In Kansas, it can damage several important crops as well as pasture, turf, and home landscaping. This insect does not overwinter in Kansas. Rather, it is native to the tropical regions of the western hemisphere and is active year-round along the gulf coast and southern Florida, migrating in from these locations each year. Two full generations are possible in Kansas with defoliation and grain damage being the biggest concerns. 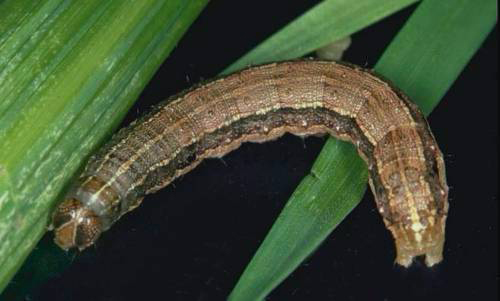 In late June, large numbers of fall armyworm were being recovered from pheromone traps in the Lubbock, Texas area and the Texas panhandle. The offspring from these large flights have been emerging and are continuing to move north. Fall armyworm adults were detected in southwest Kansas pheromone traps during the first week of July and trap numbers are beginning to increase. Adult moths are most likely active throughout the southern portion of the state.

At-risk crops should be scouted regularly for the remainder of the growing season. Caterpillars increase in size at an exponential rate and a majority of feeding occurs during the later stage of development. It is critical to scout thoroughly and treat, if needed, before the caterpillars are over ½ inch long. Larger caterpillars are harder to control and do the most damage. Recommended thresholds and products labeled for control of fall armyworm caterpillars (Table 1) can be found here.

Corn:  damage to whorl stage in early summer; treatment may be needed if 75% of plants are damaged. Bt corn may prevent ear damage.

Sorghum:  damage to whorl stage in early summer; treatment may be needed if 75% of plants are damaged. 1-2 larvae/head during flowering to soft dough reduces yield 5-10%. 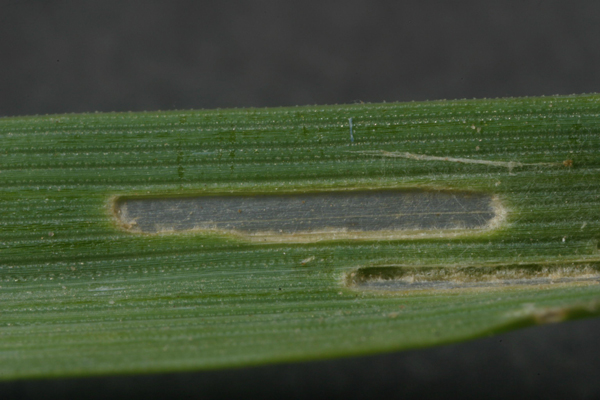