Corn planting on soils colder than optimum requires careful consideration. Also, fertilizer prices continue to be higher than normal. Therefore, starter fertilization can be useful to complement primary preplant fertilization for corn. This article will summarize key concepts of starter use for corn and conditions in which it may be more cost-effective this spring.

Common starter fertilizers have nitrogen (N), phosphorus (P), potassium (K) and sometimes other nutrients. The placement of small amounts of nutrients in the seed furrow or in a band to the side and below the seed row increases the concentration of nutrients where seedling roots grow. Early-season corn growth responses to starter fertilizer are more common in soils testing low in P and K (without preplant P and K application), without preplant N fertilization and if corn is planted into soils colder than usual. With cold soil, seedling root growth is slowed, the diffusion of nutrients through soil towards the root surface is slowed, and the plant capacity to absorb nutrients is reduced. These effects are more likely to happen in soils with moderately poor to poor drainage and with no-till with a thick residue cover (especially cornstalks) because these conditions maintain soil cool temperatures longer in the spring.

Starter P has a much larger and frequent effect on early-season plant growth than other nutrients. Phosphorus is critical for early cell multiplication, its diffusion through soil to the roots surface is slower than for N and K, and its uptake by seedlings is limited in cold soil. Early-season corn growth responses to starter P are larger and more frequent with no-till compared with strip-tillage done in the fall and when the annual P rate is applied in the fall compared with the spring. Early-season growth responses are unlikely when the two-year P rate for the corn-soybean rotation is broadcast before corn in the fall or in the spring, as long as the rates applied are not less than those recommended according to the soil-test values (see Iowa State University Extension and Outreach publication PM 1688, A General Guide for Crop Nutrient and Limestone Recommendations in Iowa).

Early-season corn responses to starter N are only slightly less frequent than for P. Nitrogen is essential for cell multiplication and since nitrate is very mobile in the soil it can be low in the top inches of soil. Corn early growth responses to starter N are observed primarily without preplant N fertilization or with preplant fertilization in the fall and when soil nitrate in the top 6 inches of soil is low due to limited soil N mineralization in cold soils, leaching or deeper injection of fertilizer or manure.

The early-season crop growth seldom responds to starter K unless soil-test K is extremely deficient because it is much less critical for early cell multiplication than N or P and its diffusion through soil is faster than for P but slower than for K.

What About Grain Yield Response to Starter Application?

Although it is common to see increased early-season corn growth with starter fertilizer, research in Iowa and the northcentral region has shown that grain yield increases are much less common. This is because good growing conditions after planting may overcome slow early growth.

Figure 1 shows results of a corn study in which early growth (aboveground plant weight at the V6 growth stage) and grain yield were measured when starter P-K fertilizer (5-25 pounds P2O5 and K2O/acre), broadcast P-K fertilizer (100-160 pounds P2O5/acre and 100-180 pounds K2O/acre) or both broadcast and starter were applied. High and nonlimiting N rates were applied in all sites and across all treatments. Results were grouped into four initial soil-test P categories (Bray-1 or Mehlich-3 colorimetric) that were Very Low or Low, Optimum (for which only removal-based P is suggested), High (for which only starter is suggested in some conditions), and Very High (for which no P is suggested). 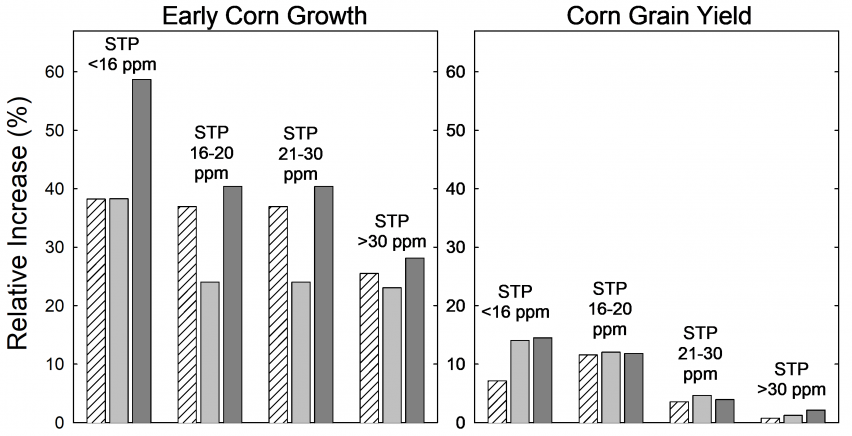 Figure 1. Relative corn early-season growth and grain yield responses to application of starter P-K fertilizer, preplant broadcast P-K fertilizer, and broadcast plus starter across 31 Iowa trials in fields managed with no-till or chisel-plow/disk tillage. Proportionally, the corn early growth responses to the PK mixtures were much higher than for corn grain yield. The early growth increases almost always were the largest for both broadcast and starter, the lowest for broadcast, and intermediate for starter. These early growth responses varied inconsistently across the initial soil-test P levels. The grain yield responses decreased as soil-test P increased, and treatments differed only for the lowest soil-test P range (Very Low/Low), with a 7% increase for starter alone and 15% for both broadcast or broadcast plus starter. Yield increases were 12% for the Optimum category, 4 to 5% for the High category, and 0.5 to 2% for the Very High category. Research results shared in a last fall ICM News article show that economic returns to P or K fertilization usually are negative in high-testing soils when removal-based rates are applied.

The corn early-season growth and grain yield responses in Figure 1 were not well correlated with initial soil-test K which ranged from Low to Very High within the soil-test P categories (not shown). This result wasn’t surprising since potassium affects corn early growth only with extreme deficiency. As an example, Figure 2 summarizes results of a corn study in which starter K, broadcast K, and broadcast plus starter K were compared with uniform high rates of N and P fertilizers. On average across sites, applied K decreased early corn growth (V6 growth stage) slightly with starter or broadcast K but significantly with both broadcast and starter K applied. Broadcast K alone resulted in the highest early K uptake and grain yield.

Figure 2. Relative corn early-season growth and grain yield responses to starter K, broadcast K, and broadcast plus starter K across eight Iowa fields. Starter N and K rates applied to the seed furrow can’t be too high because ammonia or salt effects can damage seedlings. The traditional rule of thumb for in-furrow starter application is to apply less than 10 to 12 lbs. of N plus K2O/acre, mainly with fertilizers containing urea (which changes to ammonia gas before changing to ammonium), potash (KCl), potassium nitrate, and ammonium or potassium thiosulfates. Several available starter fertilizers (often called low-salt starters) avoid using these compounds or include very low concentrations. South Dakota State University scientists developed a tool that helps make decisions for in-furrow starter application (Seed-placed Fertilizer Decision Aid). Seedling damage is more likely in dry soils or with deficient rainfall. Despite many studies and the development of this tool, however, the question of how "safe" are higher than recommended in-furrow starter rates can’t be answered with certainty because of many unpredictable factors.

What About Starter P and K in High-Testing Soils?

Although corn grain yield responses to P and K are unlikely in high-testing soils, many farmers still apply removal-based rates as an "insurance" practice. This doesn't make economic sense with currently high fertilizer prices. As results in Figure 1 showed, a lower and most economical starter P application is sufficient to avert any unlikely and small yield loss.

Also, infrequent corn grain yield responses to starter N-P-K in high-testing soils often are due to the N in the starter. As an example, Figure 3 summarizes results of a corn study conducted in eight till farmers’ fields managed with no-tillage that tested High or Very High in soil P and K. Measurements were early-season growth (V6 growth stage) and grain yield responses to liquid starter fertilizers N-P-K (5-10, 15-25, and 0-7 lb N, P2O5, and K2O/acre), N alone (UAN to supply 23-30 lb N/acre), and the starter rate mixed with UAN to supply a total of 23 to 30 lb N/acre. All fertilizers were applied about 2 inches to the side and below the seeds row. There were large early growth increases from all starter treatments (26 to 36%) that were explained by the N in the starter or synergy between a higher N rate with P-K in the starter. In contrast, grain yield responses were much smaller (2 to 3%) and were explained by the N applied.

In summary, conditions where use of starter for corn is likely to pay are:

Tips for Managing Nutrients When Fertilizer Prices Are High

Study Finds In-Furrow Starter Fertilizer May Not Pay Off