Hybrid Westbred 9590 was planted March 15 at a seeding rate of 1.6 million seeds per acre on a one-acre plot on a Kuma Silt Loam Soil with 0-1% slope. Full establishment was delayed until April 23 due to dry conditions. The spring wheat was uniformly managed. Nitrogen (N) in the form of dry urea (46-0-0) was broadcast at a rate of 150 pounds per acre May 3. The spring wheat was irrigated using Valley Center Pivot with variable rate technology and using Senninger iWob UP3 sprinklers on 10-foot spacing. Harvest occurred July 21 using a John Deere 9500 combine with a Shelbourne Stripper header.

R is rainfall, I is irrigation, RO is runoff, DP is deep percolation below the root zone, and ΔS is change in soil water storage. Rainfall was measured from an automated weather station located at the Stumpf Center and data was downloaded from the High Plains Regional Climate Center (HPRCC). Change in soil water storage was measured using the NMM. Runoff and deep percolation were considered negligible since the field had little slope, hourly rainfall rates were not excessive and soil water measurements at the lower depths did not exceed field capacity. 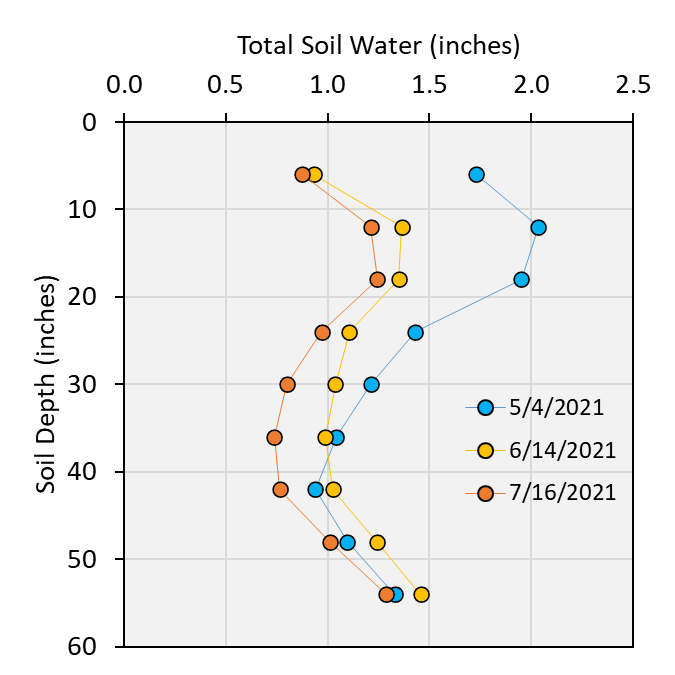 Using the ET equation from above, total crop water use (i.e., evapotranspiration) was 14.1 inches. This is below reported values of 18-21 inches for Montana (Bauder), 22 inches for Scottsbluff, Neb., (Yonts et. al., 2009), and 20-21 inches for Idaho (Ashley et. al., 2001). However, our study did not include the moisture needed to establish a crop since we waited until April 23 to install the NMM access tubes until the wheat was well established.

An effective maximum rooting depth of 3-3.5 feet was reported by Ashely et al. (2001). Figure 1 from our study shows that most of the water extracted from the May 4 to July 16 sampling dates shows the greatest extraction in the top 42 inches, indicating an effective rooting depth of 3.5 feet.

The non-replicated plot yielded 65 bushels per acre at a moisture content of 12.4%. The test weight was 60.9 pounds per bushel and the protein content was 14.5%. The yield is slightly higher than the Calculated Yield Equation from (Bauder, J.). Estimated Yield = 5.8(SM + R/I – 4.1) where SM is soil moisture, R/I is Rainfall and Irrigation resulting in an expected yield of 58 bushels. The North Dakota Wheat Commission has an expected protein content for hard red spring wheat at 13-16%.