Should You Be Concerned about Winterkill in Winter Canola?

Going from a warmer-than-normal fall to a chilly January has the winter canola crop taking on a wintery appearance. We are seeing the typical cold temperature response of white and brown colors as leaves loose chlorophyll. Despite the abnormally dry weather and growing drought concerns, the crop appears to be holding on fairly well with stored subsoil moisture. However, timely and adequate quantity of precipitation will be needed as we approach the rapid period of moisture and nutrient uptake at spring green up. 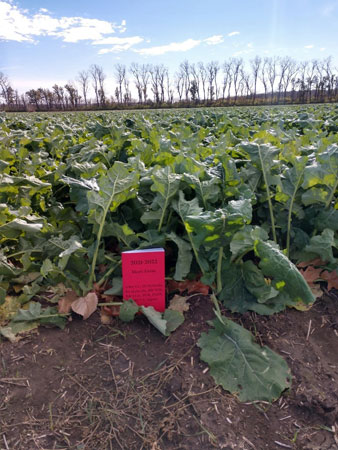 Last September, establishment conditions were challenging across Kansas. For many, soil moisture in the planting zone was lacking, making emergence inconsistent across many locations. Fortunately, rains in October, coupled with warm temperatures, allowed the crop to establish well and to attain optimum top growth (6-18 inches) for the winter. In some instances, especially near Manhattan, the crop showed excessive fall growth with potential overuse of water and nutrients (Figure 1), and as a result, fall stem elongation was observed in some varieties. Fall stem elongation produces a growing point elevated above the soil surface that is unprotected from cold temperatures and wind chill. History shows that when fall stem elongation happens it can be a recipe for winterkill. 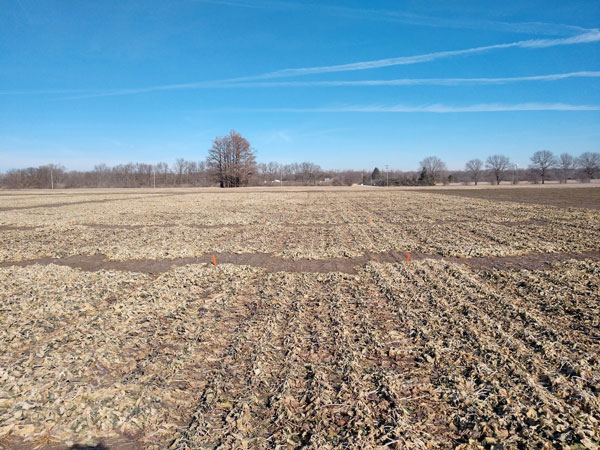 Figure 2. Canola plants in the National Winter Canola Variety Trial near Manhattan showing typical winter coloring. Hybrid varieties are planted on the left and open-pollinated varieties are on the right. Photo by Mike Stamm, K-State Research and Extension.

Cold temperatures also arrived rapidly, later than normal, and were preceded by a short acclimation period. At Manhattan, the first hard freeze (27.8°F) occurred on Nov. 12. Prior to that date, temperatures had only approached freezing on a couple of occasions and the crop was hardening off rather slowly. December was very warm, but colder periods in the middle of the month, in early January, and in mid-January have given the crop its winter colors (Figure 2).

Observations on Jan. 31 indicate minimal winterkill present near Manhattan. Most of the winterkilled plants are small, spindly ones that were outcompeted by bigger plants. Other plants that could be lost to further cold temperatures are those that are prone to fall stem elongation. These plants have taken on the characteristic white tops (bleached stems and leaf petioles) but the base of the crown and stem remain green. Only time will tell if these plants will be lost.

Two important defenses against winterkill are a flat, prostrate growth habit, which keeps the crown protected at the soil surface, and the ability to avoid fall stem elongation. The K-State breeding program continues to select for both winter protecting traits among its breeding materials and experimental varieties (Figure 3). In addition, analysis of the National Winter Canola Variety Trials over the past decade suggests that when planting during the recommended window, with a well-established crop, winterkill is becoming less of a concern. 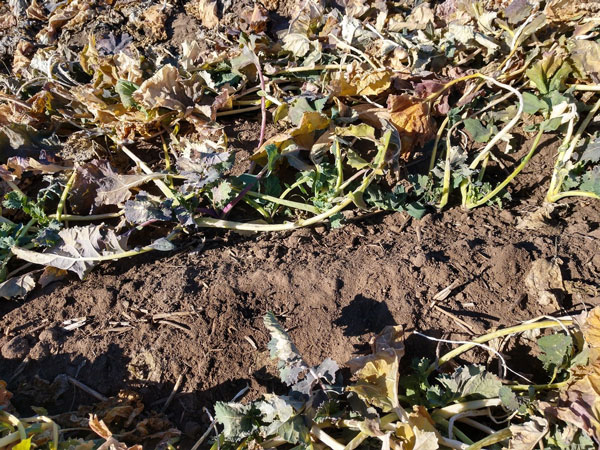 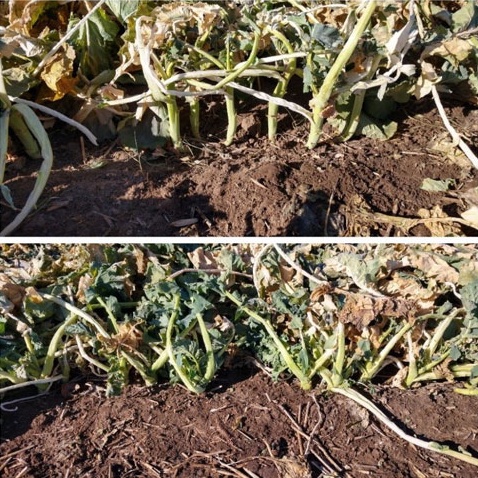 Producers who are concerned about winterkill can visit their fields and pull back the dead and dying leaves to observe the crown. If the crown is green and firm when squeezed, then there is certainty that the plant hasn’t winterkilled. However, if the crown is soft and squishy when squeezed, then winterkill may be a future concern. Remember that winterkill is best rated as the crop begins to break dormancy and after the threat of further cold temperature loss has passed. Do not give up on a thinned stand too early as canola has a tremendous ability to compensate for stand loss!

The winter canola growing season is long and we could be in for a few more stretches of bitterly cold temperatures, but the crop is well acclimated to handle these. Canola can withstand temperatures below zero at this stage, but hopefully any such stretch is short lived. It will be fascinating to watch how the crop handles our typical temperature fluctuations and dry conditions heading toward spring.

Wheat Streak Mosaic Virus: Should You Be Concerned Next Spring?

What You Need to Know About Paraquat Use in 2022