Thousands of small but compounding victories spurred no-till’s growth from 0 to 110 million acres in 60 years.

Success with no-tillage — a radical change in farming from conventional methods — came thanks to the vision, courage and dogged determination shared by many — and from every corner imaginable.

Ingenuity and an “against the grain” perseverance are omnipresent in the “no-till story.” From the testing and perfecting of new chemical formulations … to the researchers and extension agents who ignored their bosses and tirelessly studied the practice … to the salesmen who quelled their doubts upon hearing one “no” after another … to those who created the forums, associations, workshops and field days.

But most important are the farmers themselves, who constructed their own farm-shop innovations, subjected themselves to ridicule for their “ugly, lazy ways of farming,” faithfully stuck with an unproven practice and worked the problems out. Farmers’ willingness to share successes and failures were priceless in transferring know-how to the next curious farmer. Competition, ego and embarrassment were set aside for the greater good.

“Imagine how different things would have been for agriculture had John Deere been a chemist instead of a blacksmith? And instead of inventing a self-scouring steel plow, he’d invented Roundup …” — Randall Reeder, Retired Extension Agricultural Engineer, Ohio State Univ.

“I was determined that we didn’t need to plow and could do things in one pass. We tried the Western lister in the late 1950s and ’60s, before the coulter came along. In those early days, I was just trying to buy the parts we needed. We went to the John Deere factory, and they snubbed us, but International Harvester and Ralph Baumheckel of IH’s Product Planning Group opened the doors for us. Ralph let me roam around the IH planter factory and pick out whatever we wanted. I’d say it was a breakthrough because Ralph followed up on what we were doing. He believed the discontinued IH Poyner Till Planter was a real innovation and that no-till concept would work.” – Early Ohio no-tiller Bill Richards.

The New York Times publishes the 1982 article, "Erosion-Wary Farmers are Spurring the Traditional Plow." "I tell farmers they can save soil, toil and oil," says Richard Foell, who promotes herbicides for the Ortho Agricultural Chemical Division of the Chevron Corp. "We’re looking for a 15-25% annual growth rate in no-till acreage. It has an excellent hold in the Northeast. It’s growing the fastest in the Southeast. Ohio, Indiana, Illinois and Michigan are coming along. But in the farm belt west of there, farmers are scraping, ripping, tearing and raping the bosom of Mother Earth." 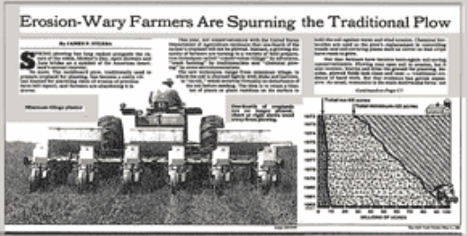 “The public, in both the 1985 and 1990 Farm Bills, sent a clear message; it will no longer subsidize practices that erode the soil or damage water quality.” — Bill Richards, Ohio no-tiller and USDA Soil Conservation Chief, 1990-93.

Are we missing an important milestone? Comment below to let us know!

Bookmark this page and check back for future updates.