Landoll Corp. acquired Allis-Chalmers landmark no-till innovation in 1993 and rebranded it as the Quadra-Planter.

Allis-Chalmers (A-C) is widely credited with designing, manufacturing and selling the first “commercially successful” no-tillage planters in 1966. A-C engineers borrowed from the ideas of Harry Young Jr.’s device on his pioneering Kentucky farm and eventually came up with several unique coulter designs and planter frames that made broader no-till acceptance a reality.

These planters, trademarked as the A-C No-Til planting systems, were capable of no-tilling corn in 15- to 40-inch rows. The difference-maker was the coulter, developed by A-C engineer Maynard Walberg. It was a deep-fluted, 17-inch diameter coulter that would slice through crop residue or sod to prepare a 2½-inch seedbed ahead of the planter unit. A heavy rubber torsion-spring provided penetration in tough soils and protected the coulter when dealing with rocks or other obstructions.

To accommodate the various coulter options, A-C engineers designed planter frames with three toolbars for 20-40-inch rows. The first toolbar held the coulters, the second toolbar carried the fertilizer boxes/tanks plus openers, and planter units were attached to the third toolbar.

According to Tim Brannon, who joined A-C as a product rep fresh out of college in 1975 before becoming a dealer 3 years later (B&G Equipment, Paris, Tenn.), A-C had a market share as high as 80% in no-till planters. He sold 60-some no-till planters in the early years. “No two were alike,” he says. “They were like erector-sets, so many different options for the specific conditions. A-C had a lot of firsts in innovation, but we were never as good at selling as we were at innovating, and I can say that as I was on the selling side. We were an innovative company that went all-in for technology, but sales didn’t catch up.”

A-C diversified into other industries (including construction and electrical power) and faced significant financial woes in the 1980s. In 1985, West Germany’s Klockner-Humboldt-Deutz AG (KHD) acquired A-C.

The A-C farm equipment business line ended when Allis sold it to K-H-D and renamed the business Deutz-Allis. In 1990, a management buyout of Deutz-Allis resulted in the formation of AGCO, which began manufacturing/distributing ag equipment under the AGCO Allis and Gleaner brands.

In 1993, Landoll Corp. of Marysville, Kan., acquired the patent, manufacturing and marketing rights of the A-C planter. Landoll had previously provided contract manufacturing for other AGCO implements. The 20-year-old shortline equipment manufacturer, run by founder Don Landoll, renamed the unit as the Quadra-Planter (4400) and began production in 1994. 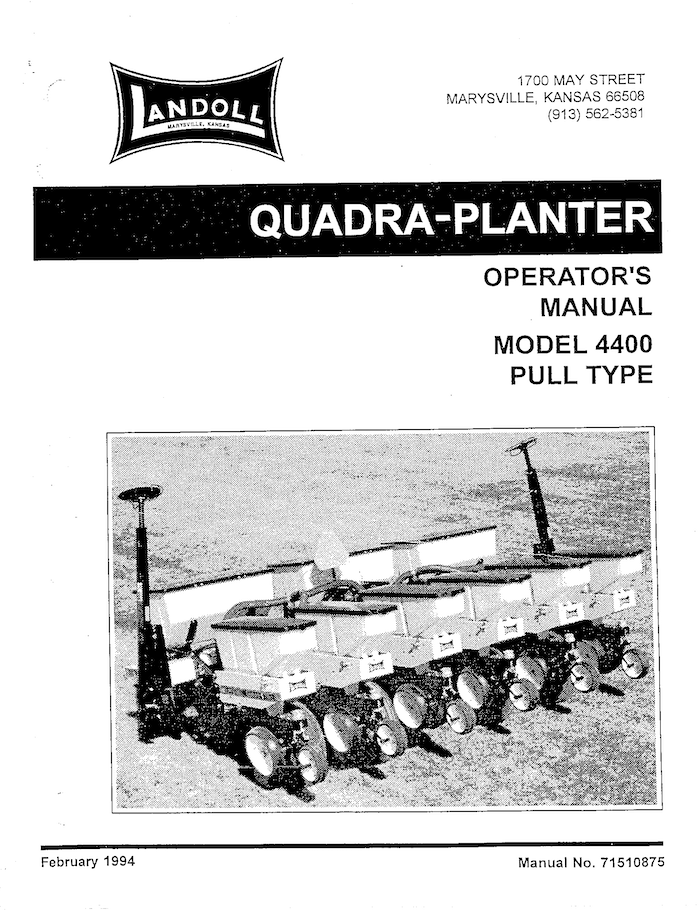 Pictured is Landoll’s original operator manual of the Quadra-Planter. Production of the unit ran from 1994-2002. Landoll continues to support farmers and dealers with parts.

The acquisition of the 6-row unit put Landoll into the planting business, according to a 1994 Farm Show article. “The planter is virtually identical to the former Deutz-Allis planter with two 16-in. offset opening discs followed by a pair of 18-in. closing discs mounted directly to gauge wheels for precise depth control.”

Landoll discontinued production of the planter in 2002, but continues to offer replacement parts today.

For More Information: See “The No-Till Planter Race: Did IH Get There Before Allis-Chalmers?”