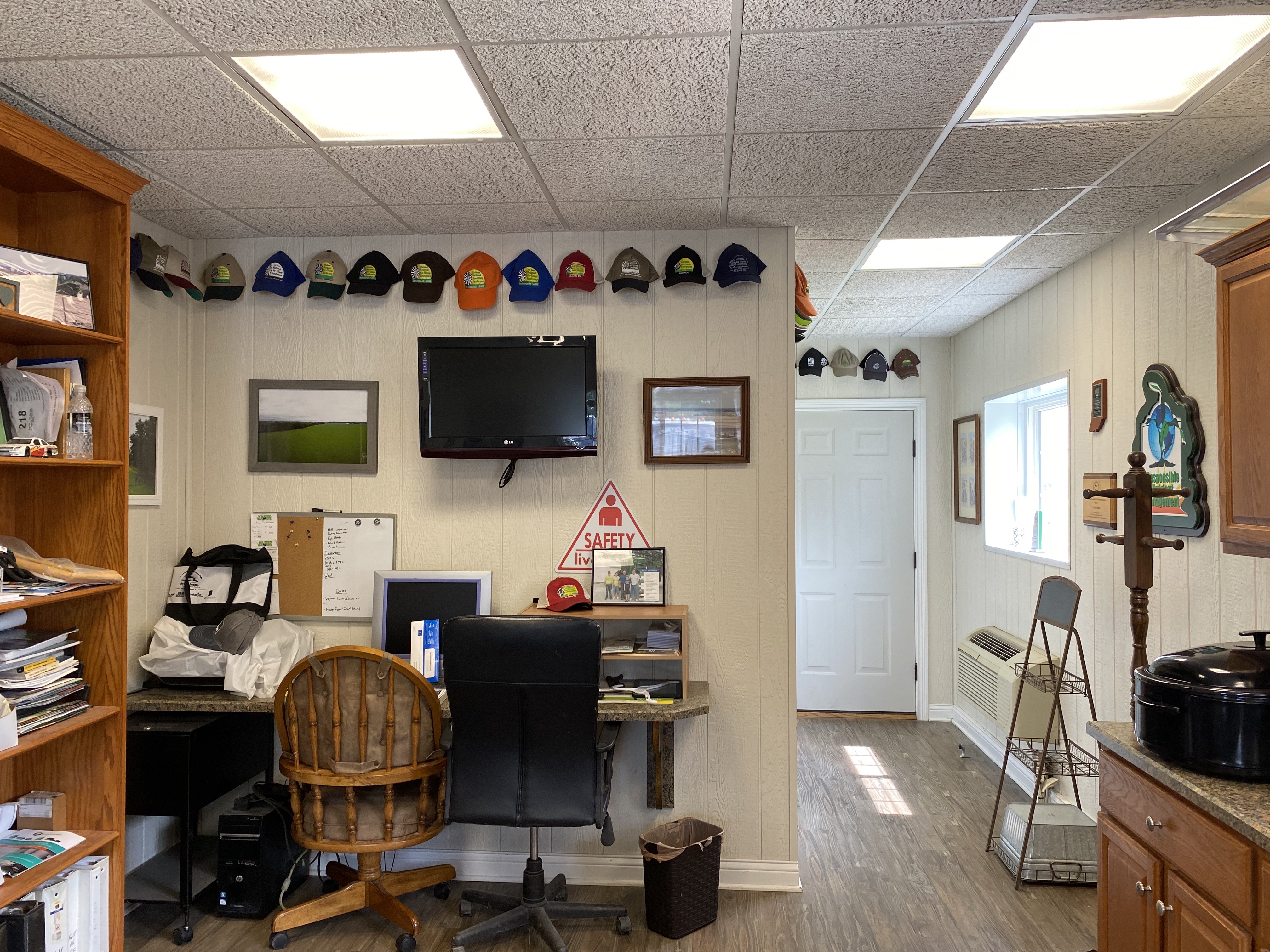 HATS OFF. Hats from 25+ years of the National No-Tillage Conference adorn the walls of veteran no-tiller Mike Starkey’s office at his Brownsburg, Ind., farm. Starkey values the farmer-to-farmer learning and networking opportunities at the conference.

“If I had a choice to attend an event that had the best top-notch land grant university person out there to present or one with a normal guy like myself, I would choose the farmer any old time,” Starkey says. “I'm interested in hearing from people who have actually done it.”

Starkey no-tills 2,500 acres of wheat, corn, soybeans and hay in Brownsburg, Ind., with his son, his nephew and his nephew’s son. Their transition to no-till started in 1989 with soybeans, and they converted the entire operation to 100% no-till in the late 1990s.

It wasn’t an easy task. His early attempts at no-till corn in the mid-1990s didn’t pan out, and he was forced to return to conventional tillage for a while. But once he connected with a mentor in 1999, he made changes that resulted in no-till success on the farm.

Since then, Starkey has been refining his management and seeking out new solutions from his peers. He estimates that he’s attended at least 25 of the last 30 National No-Tillage Conferences, using each year as a new opportunity to find out what’s working for other farmers.

“The best way to improve your no-till techniques is to look for people who have actually been on a tractor and have their hands in the dirt,” Starkey says.

At a conference many years ago, Dan DeSutter, a no-tiller from Attica, Ind., told attendees that a self-propelled sprayer was critical for no-tillers to have on the farm. Starkey was surprised at the time, but today, his sprayer is his number one piece of machinery.

Starkey spent years searching for a scouting program to help him apply his nitrogen (N) on a variable rate in management zones. The solution, once again, came from his peers at a National No-Tillage Conference. In 2020, Brian and Dan Sutton, two Lowell, Ind., farmer brothers presented about how aerial images could be used for scouting and field management. Starkey ended up hiring their company, AirScout, to take thermal images of his fields throughout the growing season.

The images indicate the temperature of the growing corn, allowing Starkey to adjust his N rates based on what shows up on the thermal map. As he does his sidedress pass with Y Drops, Starkey can see the sprayer put more N on better-looking corn. At $7 an acre for AirScout’s services, Starkey says it’s his biggest return on investment from any no-till conference.

“Everything on my operation has been learned from my peers,” Starkey says, recalling that he also learned about spoon-feeding crops, setting up coulters, putting citric acid in water to make glyphosate more effective, different species of cover crops and more from other no-tillers at the conference.

With the return of an in-person conference in 2022, Starkey is most looking forward to networking with other farmers and reconnecting with no-till friends from across the U.S. and the world.

“The relationships I built up over the years are the number one [thing] I have enjoyed at National No-Tillage Conferences,” Starkey says. “It’s a can’t-miss event for me.”

More information on the National No-Tillage Conference is available here.

5 Ways To Improve Your No-Till Planter

A Practical Approach To No-Tilling Helps Lead Newcomers To Benefits