Cover crops have environmental benefits, with many resulting from cover crops that over-winter, thereby absorbing nitrates in the early spring and building organic matter in soils over time. Because they over-winter, winter wheat and hay have many attributes ascribed to cover crops. 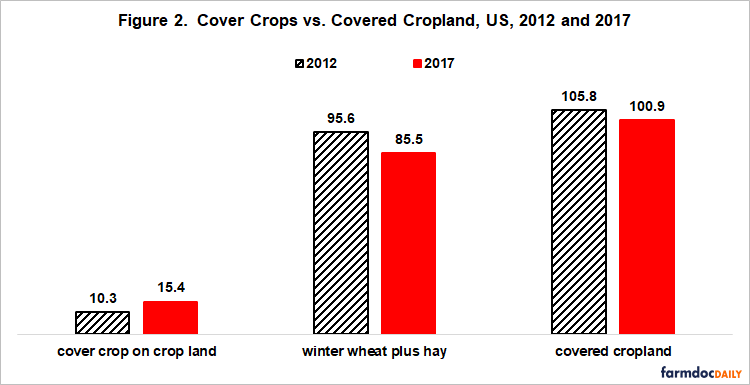 Even though cover crop acres have increased, the increase has been more than offset by declines in wheat and hay acres, implying a step backward, not forward.

Wheat and Hay Acres: The 1996 farm bill eliminated annual set asides. With a few exceptions, farms were allowed to plant whatever was desired, most likely resulting in the rotation with the highest expected return. Since 1996, aces planted to winter wheat have declined by -41% (-21.0 million) while acres of all hay harvested declined by -14% (-8.8 million) (see Figure 1).

The decline in covered cropland is likely to be even larger.  An unharvested small grain planted as a cover crop, such as wheat, is included in acres planted to the small grain.  Acres of other fall-seeded crops, such as winter oats and barley, may have also declined.

This observation led to a policy proposal to change the goal of US public research policy from enhancing yield to “growing 2 commercial crops per acre where 1 grew before” (see October 28, 2020 farmdoc daily article).  Seeking to cover more cropland more often with commercial crops potentially offers a rare win-win public policy by increasing US agricultural output while enhancing environmental quality. 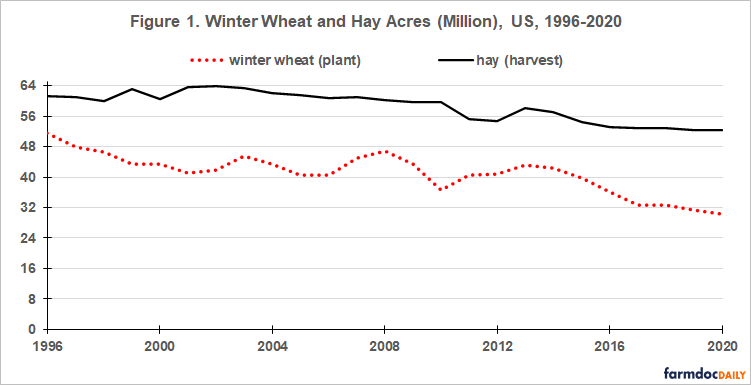 The proposal raises important questions, including:

Cover Crops Vs. Tile: Which Is The Best?