Around 10 years ago, a National No-Tillage Conference speaker shared data from a South Africa research project where corn had been grown in 60-inch rows. When he pointed out that these wide rows allowed elephants to walk through the fields, farmers in the audience laughed.

Today, the idea of no-tilling corn in 60-inch rows here in the states may no longer be a laughing matter. After all, we used to plant corn in 40-inch widths so a horse pulling a cultivator could walk between the rows.

While many no-tillers continue to reduce the width of their corn rows from 30s down to even as narrow as 12 inches, a few no-tillers are moving in the opposite direction.

Monte and Bob Bottens dedicated 160 corn acres this year to 60-inch row trials on their Cambridge, Ill., farm. They had four replications with three hybrids, along with several plant population and fertility trials. Over the years, the father/son team has worked with 15-, 20- and 30-inch row corn

“What we’ve learned by thinking differently is asking what would happen if we concentrated the nutrients and took the same number of seeds that were originally in 30-inch rows and placed them in 60-inch rows,” says Monte Bottens. “This wider row width allows the sunlight to hit the corn plant from top to bottom, which leads to improved efficiency when it comes to feeding the soil’s microbial community.” 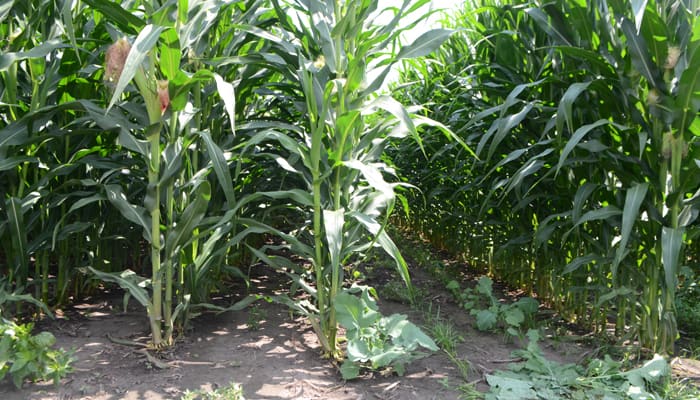 Wider Rows. That’s 30-inch corn rows on the left with 60-inch rows on the right. This plot was planted in 2017 on the Charles Hammer and Nancy Kavazanjiam farm at Beaver Dam, Wis.

Their hope is to find no yield differences between 60-inch and 30-inch rows in cornfields that average 240 bushels per acre. They’ve also experimented with summer interseeding of a cover crop with the goal of having the cover grow along with a picket-fence corn stand and inter-grazing lambs after harvesting the corn crop.

Monte says they were unsuccessful this year in growing an adequate cover crop for inter-grazing due to poor timing of the seeding and depth of planting.

“With this system, we would have revenue coming in from the corn, soil health benefits from the cover crop and meat production all from the same acre,” he says.

Monte says cover crop selection is critical with 60-inch rows. Species that do not compete, such as annual ryegrass, radishes and cowpeas, seem well suited for 60-inch corn rows.

He says weed control can be a challenge with wider rows and the lack of residual herbicide options with interseeded cover crops.

No Impact on Yield

Bob Recker says limited data indicates 60-inch rows shouldn’t have an impact on corn yields. “This liberates half the ground for growing cover crops, a companion crop or maybe a grazing crop,” says the farm consultant who operates Cedar Valley Innovation in Waterloo, Iowa. As a result, growers will see much more sunlight in the row area with 60-inch rows while overcoming the unfavorable impact an earlier closing corn canopy can have on interseeded cover crop growth with 30-inch rows.

Recker works with two dozen growers located from Maryland to Colorado who have tried the 60-inch row system. These no-tillers simply turn off every other row on a 30-inch row no-till planter and double the per-row population in the wider rows.

“It’s too early to tell, but it looks like we’re not going to see a significant reduction or increase in corn yield,” he says. “What we are going to see is a much healthier, much more dynamic cover crop environment that’s going to pay the dividends we’ve been looking for with soil health. The challenge for most folks is going to be to move from a scorched earth weed treatment program to a cover crop program where cover crops are actually suppressing the weeds.”

Recker, who will be speaking on this innovation at January’s National No-Tillage Conference in Indianapolis, says the system works with existing equipment, lets no-tillers run wider sprayer tires to trim plant damage, reduces compaction and provides better access to the crop throughout the growing season. It’s also a chance to try something new without adding equipment or input costs.

This is an excellent example of what can take place when no-tillers think outside the box and look at traditional practices in an entirely different way. How are you looking at new ways to make your no-till program more efficient and profitable during these tough farming times?