Managing Disease, Nutrient and Residue Issues in the Storm’s Aftermath

Stagnant grain prices, disease pressure and residue management will make decisions with downed crops especially important for no-tillers this fall. Here are some tips and suggestions on what to do.

As if 2020 hasn’t been bad enough, many no-tillers and strip-tillers in the Upper Midwest are mulling their next steps after a powerful “derecho” storm this month destroyed millions of acres of crops.

Packing average winds of 70 to 90 mph and gusts over 100 mph, the storm swept through Iowa, northern Illinois and northern Indiana, moving 770 miles in 14 hours before weakening over northern Ohio later in the evening.

Winds snapped or bent over corn plants and stripped soybeans plants of leaves and pods. Hail also pummeled crops and stripped away leaves.

In an interview with S&P Global Market Intelligence, Diane Weidner, vice president for communications for Great American Insurance Group subsidiary American Financial Group Inc., said it will take several weeks for crop insurers to calculate the extent of the damage.

The storm was “unique” in that it came when the corn crop was at a later stage of maturity and therefore more vulnerable to wind damage, she noted. 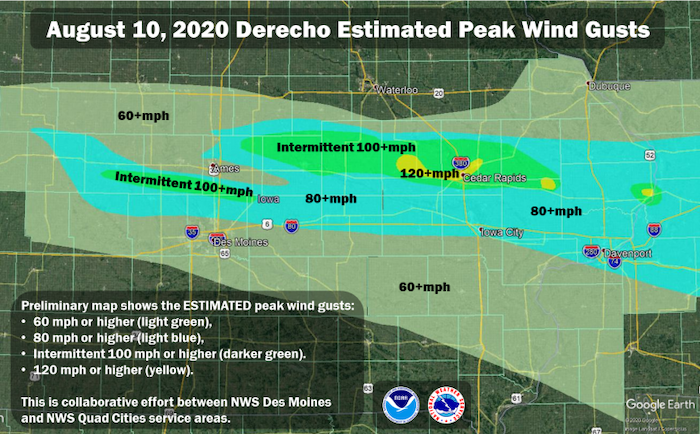 This map from the National Oceanic and Atmospheric Administration shows where the highest winds were located during the Aug. 10 storm that flattened tens of millions acres of crops across the Upper Midwest.

The heaviest impact in Iowa was felt in 36 counties, affecting 3.57 million acres of corn and 2.5 million acres of soybeans, as well as grain bins that were storing “tens of millions of bushels of grain” that already had been harvested, said state Agriculture Secretary Mike Naig. 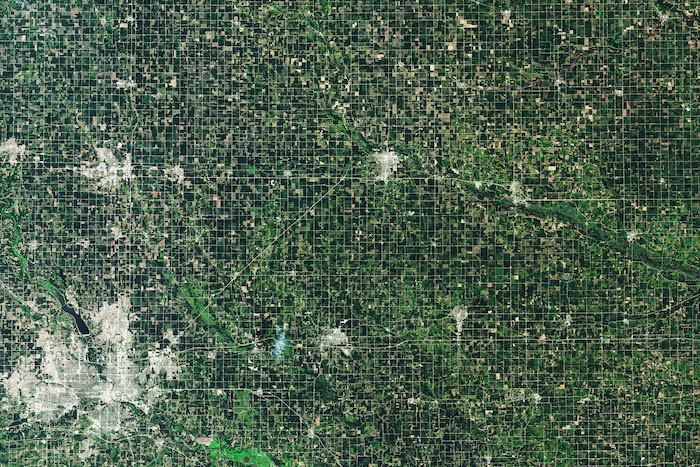 These satellite photos provided by NASA show crops in Iowa before the Aug. 10 derecho (left) and afterward with crops flattened by extremely high winds. (Source)

On-farm grain storage was also devastated. Farmers Business Network revealed a survey of membership that estimates 50-75 million bushels of bin space belonging to farmers in Iowa will be unusable for the 2020 harvest season.

There could be a high price to pay for insurers once damages are calculated, especially for the federal government, S&P reported. Samuel Funk, chief economist for the Iowa Farm Bureau, said 95% of corn and soy acres in the Hawkeye State are covered by federal crop insurance.

Funk said language used by the USDA’s Risk Management Agency suggests that the derecho could be the largest single-day exposure in the history of federal crop insurance. He said federal insurance already was going to be important to farmers because of "price impact" and the ongoing drought.

“It’s necessary for us to get really to the end of this year for an assessment," Funk said. “Some may harvest and actually have an above APH yield, but we would know they might not have reached the specific yield they expected prior to this event.”

Even if growers get some reimbursement based on the yield guarantee and their contract coverage, it likely won’t cover the cost of harvest or other management that may be necessary in gathering the crops, says Gary Schnitkey, an ag economist at the University of Illinois.

If corn was $3 a bushel, a grower would need at least 13 bushels an acre from the crop to cover the estimated $35-$50 an acre it will cost for harvest operations — “and is there enough corn out there to cover that?” Schnitkey asks. “The company will make a payment after calculating yield times the harvest price and if it’s zero yield they will certainly pay — but at 15% below of what is expected. That 15% is usually the profit,” he says.

“Crop insurance can provide good coverage, but once you get your payments you’re still just cutting your losses. If you don’t harvest the crop, a crop adjustor will come out and say what the yield is. So farmers may want to talk to their crop insurance company soon.”

Harvesting corn for silage is another option if growers have a market that is available, as well as grazing the crop.

One of the first things farmers must do is figure out the status of their crop. Meaghan Anderson, field agronomist for Iowa State University Extension, says no-tillers will need to separate plant injury into three categories:

Effects of Root Lodging. Anderson noted research that looks at impacts of lodged corn on yield, but most of it was done on corn before or shortly after tasseling.

Most of this year’s affected corn is in the dough stage (R4), or even early dent (R5). In a 1988 University of Wisconsin study, researchers manually pushed the base of corn plants perpendicular to row direction to cause root lodging.

They noted that within 2 days after lodging, the upper portion of plants became upright and subsequent timing of plant development was not impacted. But more barren plants were observed when lodging occurred at later development stages, impacting yield. Corn lodged after V17 resulted in a 12-31% yield reduction.

But Anderson says there are a couple of distinctions to consider. The ability of corn plants to recover and become upright is much less likely when plants are lodged at the R4-R5 stages than in the late vegetative or early reproductive stages.

Yield loss would be more when lodging at V17, since there is 0% of the grain dry matter accumulated at that time. Grain dry matter at R4 is about 20%, and at the beginning of R5 it is 25% (see ISU Extension and Outreach publication PMR 1009, “Corn Growth and Development”), Anderson says.

Availability of moisture, severity of root system damage by lodging, and other issues can impact the extent of yield loss in this situation.

Pinched, Broken Stalks and Lodging. Kinks in stalks restrict movement of resources within the plant, similar to kinking a hose while filling a water tank. If all plants are flat and still rooted into the soil, certainly they’re not intercepting as much sunlight and filling grain as normal, Anderson says.

If roots were damaged significantly and it continues to be dry, additional yield reductions will occur because nutrient and water uptake efficiency will be compromised.

Plants with broken stalks above the ear will continue to produce photosynthates using intact leaves, but the available resources to fill grain will be greatly limited. Best-case scenario would be the yield loss mentioned above, with more yield loss possible based on these other potential issues, Anderson says.

“Test weight will also be compromised,” she adds. “Additionally, these stresses might cause premature death of some plants. Hopefully, they continue to live and produce marketable grain, although they will mature at a slower pace.”

Broken Below the Ear. Plants broken below the ear can no longer add dry matter to the grain, “so we’re left with about 25% of the potential dry matter accumulated,” she says. “Test weight will be very low, and the ability to store grain killed in the dough stage is extremely limited, if at all possible.

“If you made it to the early dent stage, yield loss is still likely over 40%, and test weight and storage capability remains very low. The best use is silage, if a use for that much silage can be found and it can be properly ensiled.”

Even if corn can be salvaged for grain, farmers will also need to figure out nutrients from the plants, says Antonio Mallarino.

Nutrients such as nitrogen (N), phosphorus (P), and potassium (K) remaining in the field may be different than with normal harvest due to partial plant removal, grain harvest, or grazing, says the nutrient management  specialist at Iowa State University Extension. So adjustments can be made for future fertilizer or manure applications.

The corn plant P and K concentrations, as well as the N and dry matter concentrations, may differ with earlier growth stages. A recent ISU research study conducted across two years looked at the dry matter and nutrient content of several era corn hybrids. The following information is taken from the most modern hybrids in that study.

Plant dry matter and nutrient content increases as reproductive stage and grain fill progresses (Tables 1 and 2). These values can be used as estimates/adjustments for the corn stage in specific fields.

Total corn plant dry matter and nutrient uptake varies by productivity (yield level) and specific growing conditions (weather, hybrid, etc.). Tables 3 and 4 list the dry matter and nutrient content for the hybrids’ grain yield of 224 bushels an acre. Of course, estimated nutrient amounts should be based on each field yield or harvested plant component and yield.

With normal corn silage or grain harvest, considerations for nutrient management and application rates for the next crop will not be different compared to a normal year.

It’s likely a given that grain quality is going to suffer with corn that was damaged while still in the developmental stage, says Martin Chilvers, a crop pathologist at Michigan State University Extension.

Because the corn was in contact with the ground, there is potential for ear molds and secondary ear molds to develop. “On the ground is not a good place for ears to be sitting before harvest,” he says. “You could even have situations that produce vomitoxins.”

Chilvers says there’s potential for picking up the crop before reaching full moisture, and paying extra for drying, acknowledging that farm profits are already tight for many farmers. “Maybe that would keep secondary molds from doing more damage,” he says.

At this point, Chilvers doesn’t feel fungicides will work to prevent disease, mostly because it’s too late for treating foliage and dry conditions in mean tar spot, grey leaf spot are not likely widespread. “Farmers may be wasting money by spraying down corn right now,” he says.

Residue management is going to be another issue, especially for no-tillers who aren’t itching to drag a piece of iron through their fields.

Some pathogens do survive and overwinter on residue and crops laying in the field, which weren’t processed through a combine, could cause a couple of issues — massive stands of volunteer corn, and piles of stalks and cobs that could interfere with spring planting in 2021. 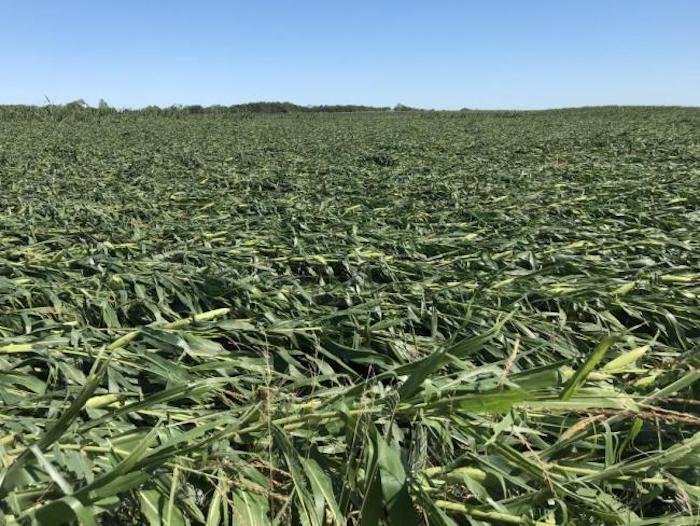 Many no-tillers will not want to do tillage, although they may need to be balanced with getting trashed fields ready for spring planter.

“The more that germinates this fall, equates to less volunteer corn in the spring,” he says.

“If choosing to disc the field, minimal soil disturbance is recommended to avoid potential erosion and soil structure degradation, and assist with better water infiltration. Maintaining residue cover on the soil surface will reduce erosion and help maintain soil moisture reserves by reducing water evaporation from the soil.”

Looking ahead to planting next spring, he adds, “soybeans can be forgiving when planted into high amounts of corn residue.”

Resources for Dealing with Downed Corn