With more than 700 acres of certified organic farmland, Wisconsin farmer Megan Wallendal shares tips on making the most of strip-tilled organic crops.

Often, it’s the allure of operation-wide cost reduction that convinces famers to transition into strip-tilling. But, on the Wallendal family farm, strip-tilling since 1985, they’ve found a way to push revenues in addition to enjoying the efficiencies. Initially transitioning around 20% of their acres to certified organic production has allowed them to grow high-value specialty crops on some of their least productive fields.

While they still grow plenty of conventional crops, Megan Wallendal, and her husband Eric, have found that the weed control benefits and targeted fertilizer applications of strip-tillage work particularly well for organics. Experimenting with high-value row crops (historically more than 35 different vegetables on the farm) and organic farming practices they’ve worked to evolve their 1,800-acre operation near Grand Marsh, Wis.

To build their strips, they use two 12-row Orthman 1tRIPr rigs, recently transitioning into a 22-inch system on nearly all of their strip-tilled acres. Wallendal says they converted their planters and tillage equipment to a 22-inch system for quicker plant canopy and row closure, along with more effective weed control and higher yields.

Their farm is comprised of mostly sandy soils with an average of 1% organic matter, under center pivot irrigation.

Due to certain limitations, farming organically comes with inherent costs — especially when it comes to inputs. Wallendal says the increased control over fertilizer placement in a strip-tilled system is especially important as those costs rise.

“Strip-till has been really important to us for organics, particularly, in terms of banding nutrients,” she says. “We've got crops that can't always reach out for that two by two-inch method. Banding becomes a lot more economical than broadcasting.”

Because all the inputs must be OMRI (Organic Materials Review Institute) approved, the Wallendals’ products are limited organic fertilizers like manure, fishmeal, compost and chicken litter.

“We band these about two gallons per acre,” she says. “The broadcast rates for those are about 10 gallons per acre. That's a $56 per acre savings on just organic nutrients.”

Increasing demand is likely to help the market for organic crops continue to outpace the added costs it brings to the operation, Wallendal speculates.

“Our costs might increase 30-50% in some places, but our revenue is much higher,” she says. “Looking at organic markets today, I believe there’s around a 15-20% increase in demand, but the amount of land being transitioned in 2018 was only about 6% of that. That’s a huge gap, one that I think will be around for the next ten years because it takes three full years to make that transition.”

Transitioning more than 700 acres through the 3-year process of organic certification, Wallendal offers a few field-tested strategies for making a move toward organic and specialty crops in a strip-tilled system:

Though the transition to certified organic production on a given field generally takes three years, there are ways to be strategic, Wallendal says.

Always interested in calculated experimentation on their 1,800-acre operation, Megan and Eric Wallendal plan to strip-till 50-100 acres of hemp in 2020. After researching market potential and purchasing partners, Megan says they have a game plan for adding the specialty crop to their diverse rotation.

“We have a contract in place and we plan to spring seed a heavy mix of oats and clover on our ground going to hemp,” she says. “We’ll then mow that cover and strip-till into it twice with our 12-row strip-till rig, set up on 22 inches and then transplant right into those strips, which are set up in 5½-foot rows. ”

The model for the Wallendals’ hemp system is based off their strip-tilled pumpkin program. They raise about 250 acres of pumpkins, traditionally following either potatoes or maybe corn.

“The fall before we plant pumpkins, we’ll seed about 2½ bushels per acre of Aroostook or Elbon rye, which we’ll fertilizer and water if needed,” Megan says. “We’ll use a dessicant if we have to, to force the cover crop into anthesis and in May, it when it’s about 12 inches tall, we’ll strip-till into that rye crop.”

When it’s about knee or hip height, the Wallendal’s make another strip-till pass, then roller-crimp and follow with one more strip-till pass. “The reason we strip-till 3 times is because we seed such a heavy cover of rye and we need to break up those root balls and pumpkins need a really specific seedbed.” Wallendal says. “We’ve tried just strip-tilling only twice and using a lighter rye, but had trouble getting through after roller crimping and have found that this pass was like butter through the field.

“We’ll plant our pumpkins in early June, and the only herbicide we’re allowed to apply is a pre-emerge. But we’re only getting about 2% weed pressure in 4-foot rows, so that’s pretty good.”

“We’ve selected some of our lowest performing fields, and transitioned those,” says Wallendal. “We weren't making any money on them conventionally. They had the lowest organic matter and were just the poorest-looking and performing fields on our farm. We thought, if we can make these healthier and more productive, our overall farm health would increase.”

For some farmers, locating a market for crops harvested from fields in transition to certified organic is possible, but even if it’s not, Wallendal notes that it’s still possible to time seasons for maximum gain. 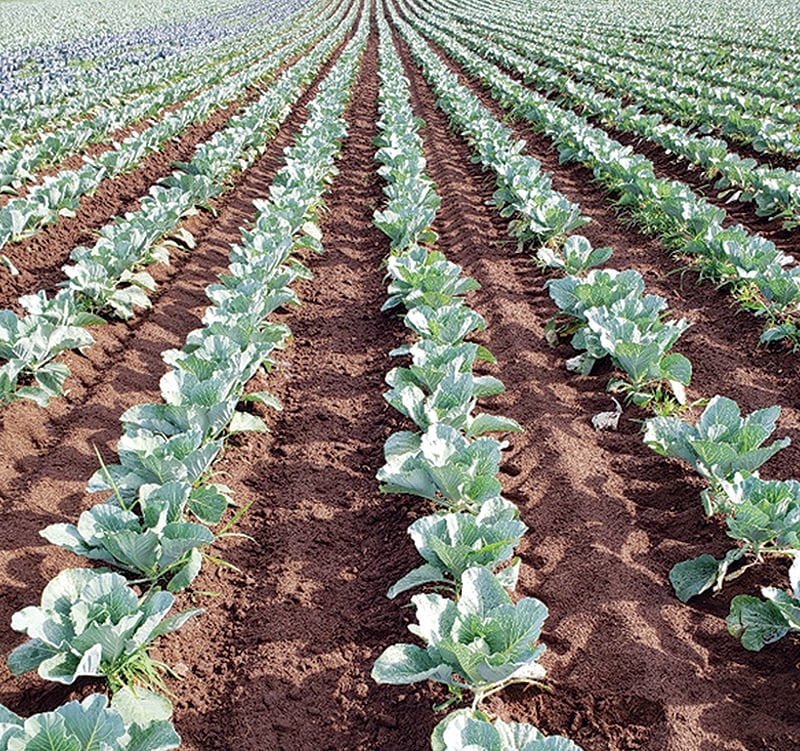 DIVERSITY DIVIDENDS. Experimenting with high-value organic row crops, historically more than 35 different vegetables on the farm, including cabbage, Megan Wallendal says increasing demand is likely to help the market for organic crops continue to outpace the added costs it brings to their operation.

“We weren’t able to find a market for transitional crops near us, in some locations with more industry or livestock that may be possible,” she says. “What we did is put our fields into cover crops for two seasons specifically for soil health or soil regeneration. Then, when we’re ready for organic, we plant the crop at the beginning of the third season. It’s a 36-month transition so by the time we get to harvest in the third season, it would be certified organic by then.”

Wallendal notes that finding a nearby organic farmer is a good start to getting a read on the local demand for certified organic crops. Local dairies, livestock operations or grain elevators are good places to look too. Local market information can provide guidance on what crops to introduce.

At some point, the market may come to the farmer, she adds.

“We actually have contractors coming to us saying, ‘Hey, we hear you’ve got organic ground, can you grow this?’” Wallendal says. “Because they’re coming to us, we can find those higher paying contracts and charge a premium. It doesn’t always have to be in our area either. We shipped some grain to Canada and Michigan in 2018. They have a good amount of certified organic acres, but we’re able to get paid a premium that covers our trucking costs.”

Most of the Wallendals organic crops are contracted before they’re planted. For instance, their snap beans and sweetcorn are contracted with Del Monte Foods and Hartung Brothers Inc., and Chippewa Valley Bean has a contract on their dark red kidney beans.

Despite being certified, sometimes the buyers need a bit of convincing that strip-tilling is effective. Wallendal says this can be done with small test fields.

“About five years ago they (Hartung) wouldn’t allow us to plant their beans in 22-inch rows or strip-till, because they just didn’t understand it,” she says. “Working with the field man, we took a five-acre portion of the field and just did it our way. We wanted the field man coming out every week to look at it to really get him on board and really believing in our practices. After inundating them with more information and research articles on it, they ended up giving us the go ahead.”

Wallendal says the biggest issue with strip-tilled certified organic crops is weed pressure. Because of the challenges created by herbicide restrictions on organics, they’ve had to get creative to choke out weeds naturally.

For this purpose, using a roller-crimper and leaving heavy residue in rows has been helpful. 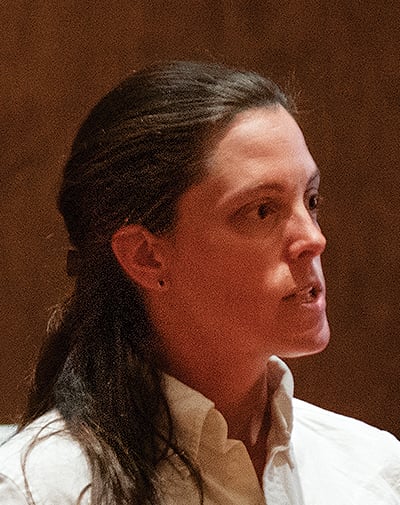 “There’s a 15-20% increase in organic demand, but the amount of land being transitioned in 2018 was only about 6% of that. That’s a huge gap, one that I think will be around for the next ten years because it takes three full years to make that transition…” — Megan Wallendal

Specifically, for crops that need a heavy “mat” like our conventionally grown pumpkins, Wallendal uses an ‘Aroostook’ rye variety from Maine as a cover crop. The variety goes through anthesis (pollen shed) about 10 days before a typical cereal rye in Wisconsin would, so she’s able to use a roller crimp on it, sooner.

“We go in and strip-till when it’s about four inches high,” Wallendal says. “When it gets to 8-12 inches, we’ll strip it again. Then after we roller crimp it, we’ll strip-till one more time. That’s early June through, so it is a later system, but we’re starting to do this with our soybeans as well because the weed control is so amazing. We’re finding 1-2% weed occurrence and the only herbicide we’ve put down is a pre-emerge, a mix of Sandea and glyphosate for some burndown.”

Though strip-tilling into the cover crop three times felt like a lot, a brief experiment with only two passes in 2017 convinced Wallendal that all 3 passes were necessary to properly prepare the seedbed.

Purposely treating cover crops themselves like a cash crop has gone a long way toward helping them “crimp nicely,” Wallendal says.

“In fall, we water the cereal rye and in the spring we’ll give it a shower of nutrients and more water,” she added. “We’ll apply a little 32% nitrogen (N) through the center pivot irrigator and spread some Calsol on it as well.”

Leaving heavy residue in rows has also been helpful to choke out weeds.

“Leaving the residue in the row really helps. We have to use a tine harrow a lot in our soybeans, corn and dry beans so we're planting a higher population,” she says.

Even small improvements to their weeding program on organic acres pay dividends.

“Once the crops are little bigger, we can’t use a tine harrow, so we have a finger weeder that’s able to get right near the plant,” says Wallendal. “It’s been really helpful because we still have to budget hand weeding into our costs of production. That usually ends up being about $150 per-acre in our organic crops. We haven’t reached that every year, and that’s due to a lot of the cultivation practices we’re using to reduce costs.”