How a Robot May Show Us Why Soils are Disappearing

It can climb hills and plod its way across open deserts, collecting data in all kinds of weather. The six-legged robot is also designed to help an Agricultural Research Service (ARS) scientist and his colleagues better understand wind erosion, which is a threat to the western U.S. rangelands that beef producers depend on for grazing.

“Robots are being developed for all sorts of uses. In this case, they will help us understand, and ultimately manage, the changing conditions we’re seeing on millions of acres of rangelands,” says R. Scott Van Pelt, of the ARS Wind Erosion and Water Conservation Research Unit in Lubbock, Texas.

Van Pelt has been working for 3 years with University of Pennsylvania researchers on finding ways to use the university’s robot to measure wind erosion in rugged and remote areas where windstorms make 24-hour monitoring hazardous.

Instruments that measure windspeeds and other conditions can be mounted on a robot about as easily as they could be placed at any stationary site. Data from multiple sites will give a more comprehensive picture than data from just a few fixed sites, says Van Pelt. “It’s unhealthy to be out in a sandstorm collecting data, and all the equipment you need to collect it can be put on a robot,” he says.

The robot moves about as fast as a walking adult – about 5 feet per second – on cantilevered legs. It has an aluminum frame and weighs about 22 pounds. It is about 22 inches long, 15 inches wide, and stands about 3 inches off the ground. It can climb hills at a 25-degree slope, runs for about 2 hours on a battery pack, and has the contours, or profile, of a wagon with a “flat back” for mounting instruments. The scientists call it “RHex,” a contraction of “robot hexapod,” because of its six-legged design. 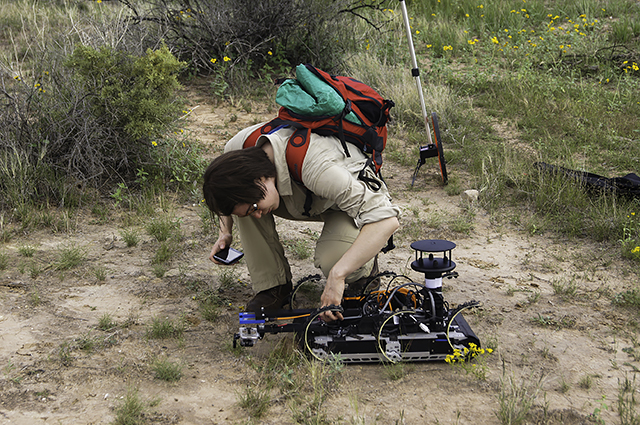 At this point, researchers need to keep it within visual range to guide it. Van Pelt hopes to connect it to an automated guidance and collision-avoidance system within a year so that he and his colleagues can control it from 5 to 10 miles away and eventually preprogram its movements.

There’s a critical need to understand how changing wind and weather patterns are altering western rangelands. The slow, soaking rains that have kept soils in place for generations are being replaced by sporadic major storms. Soils get washed away and deposited in areas where they are susceptible to wind erosion, and that creates more dust. Changing weather patterns are also creating conditions conducive to the growth of invasive plants that cattle can’t eat, more patches of bare earth, and less grass to retain the soil. Sources of nutrition for cattle and sheep are being lost, and ranchers and beef producers who depend on rangelands for grazing are increasingly concerned.

Yet little is known about the effects of windstorms on rangeland soils and vegetation under different scenarios. Using robots could help scientists fill in those knowledge gaps.

Van Pelt is just starting to work with the robot, which costs about $25,000. But initial testing with an earlier prototype, also developed at the University of Pennsylvania, has already generated valuable data, he says.

For instance, it showed that sunlight creates random spots of buoyancy and turbulence in the wind fields at ground level—and that causes soil particles to start moving and rise into the wind. That isn’t apparent from the wind erosion models that have been developed over the years based on data collected using wind tunnels, he says.

Most western rangelands are managed by state and federal agencies. With better data and improved computer models, rangeland managers will be better equipped to determine how many head of cattle beef producers can graze on rangeland sections allotted to them. Van Pelt also plans to use the data to develop maps that identify erosion and dust emission “hot spots” throughout the West.

“We’re really excited about the possibilities,” he says.

Are Your Soils Paying You Back?

Why Dung Beetles Are Your Friends

The Top 10 Precision Farming Mistakes... And How To Correct Them (NNTC 2013 Presentation) - MP3 Download