One plant disease to keep a lookout for when harvesting grains and grasses for animal and human consumption is ergot. The ergot pathogen generates toxic alkaloids that potentially could create problems with livestock feeding, and when trying to market a small grain crop. This article will review some of the commonly asked questions pertaining to ergot. 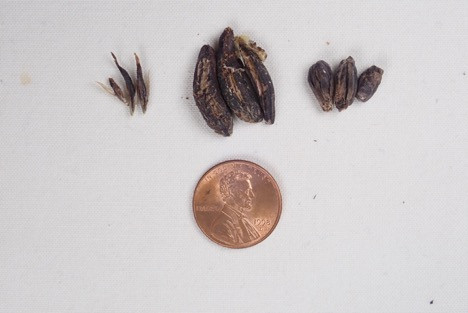 1. What does ergot look like and how do I handle it?

Hard black fungal sclerotia bodies (called ergot bodies) are the most indicative sign of the ergot pathogen. The ergot bodies will vary in their shape and size depending on the grass host (Figure 1). For example, ergot bodies in rye tend to be the largest, whereas ergot bodies on quackgrass are much smaller. Some of the most common hosts this time of year are bromegrass (Figure 2) and quackgrass (Figure 3).

In small grain seed lots, ergot bodies may be misidentified as rat droppings. Another important reminder is that the harmful effects of ergot are confined to the ergot bodies. Ergot is not a systemic disease (does not spread throughout the plant), and there are no known harmful effects from eating or utilizing other parts of affected plants. The ergot bodies are a food source for insects and beneficial microorganisms, so they often don’t remain viable for more than a year. Tillage that incorporates the ergot bodies in the soil prevents the spore bearing structures that germinate from ergot bodies from reaching the surface and reduces the chances of infection in subsequent years (Figure 4). 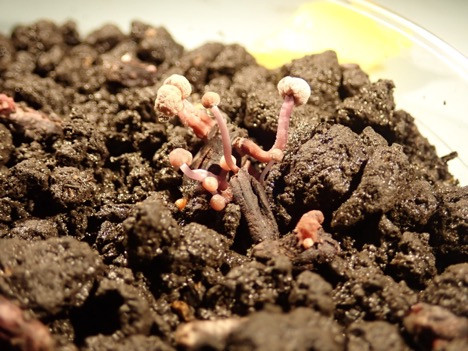 Cool temperatures (60-80 F or 16-27 C), rain and long dew periods are favorable for ergot. The cool, wet conditions promote the germination of the ergot bodies and also promote the infection of the grain spike or panicle (Figure 5). The sporadic nature of ergot is largely explained by the localized weather conditions that occur prior to and during heading of grass hosts. When a conducive environment aligns with heading of grasses or small grains, the probability of ergot increases. 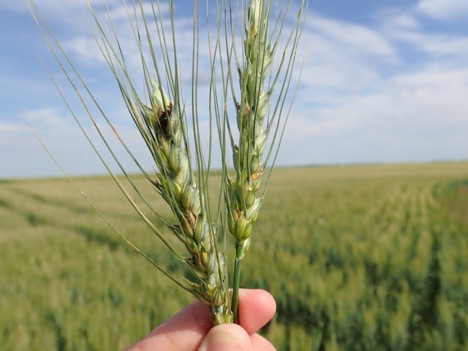 3. Why do we worry about ergot?

Ergot has a long documented history of being toxic to animals and humans. In animals, the toxic alkaloids cause vasoconstriction (reduce blood flow to outer extremities), leading to tissue death of the ears, tail and hooves in cattle, in addition to feed refusal. In humans, ergot consumption also leads to reduced blood flow to outer extremities (fingers, hands, feet, etc.), hallucinations and vomiting.

4. The fields and ditches are being hayed and I notice ergot. Can I use it for feed?

Bromegrass and quackgrass are some of the most common carriers of ergot in road ditches. In cool-season grass fields ergot can also infect many species such as tall fescue, orchardgrass, smooth bromegrass, perennial ryegrass and timothy. Ideally the best time to scout for ergot on grasses in the field or ditch is prior to cutting and haying. For next year, an even better option is to hay or cut the grasses in the road ditches prior to heading as this will help prevent the ergot fungus from colonizinging the seed heads. At this point in the season, if the field or ditch has already been hayed, it is still possible to scout for ergot. Producers can go to the field edge or ditch where the hay was made, but not cut, to see if ergot bodies are present. In addition, a visual inspection of the hay lot can be done to see if there are ergot bodies on the seed heads that survived the hay-making process. Carefully look at the outside edge of the bales, and open the bale to see if ergot bodies are found. No guidelines exist to determine safe levels of ergot present on grasses in a road ditch and if it should be used for feeding. The best option is to find a better feed source. It is possible to dilute the food source; however, there are no guidelines for this approach. If you still choose to use the food source with ergot, pay close attention to the livestock and look for early symptoms of ergotism such as lameness in legs and reddening of extremities. If you suspect ergotism, remove the food source immediately.

There are a few laboratories that offer testing options for ergot alkaloids. Check with local extension personnel to determine what options are available in your area. Dr. Tim Evans, University of Missouri Medical Diagnostic Laboratory, suggests taking a representative sample of hay that fills a large garbage bag, or a gallon of hay probings with a large diameter probe (e.g. Penn State hay probe), and sending these samples for testing for the presence of the ergot alkaloids. Also, consider testing tall fescue for ergot alkaloids and ergovaline produced by the endophytic fungus found in endophyte-infected tall fescue. The University of Missouri Medical Diagnostic Laboratory indicates that ergovaline levels of 100-200 ppb is the threshold for cattle and that as little as 25-50 ppb is the concern level for first-time-to-birth mares in late gestation.

The most susceptible small grain to find ergot in is rye (outcrossing species and long flowering period), but ergot problems have been documented in wheat and barley. In small grain fields, higher levels of ergot are often observed near road ditches (near perennial grass hosts) or in fields that had problems at pollination (ie: hail damage or heat sterility). When ergot is detected in small grain fields, separating the grain at harvest is recommended to avoid any contamination issues. A strict ‘by weight’ threshold is used for contaminated seed lots. Thresholds include 0.05 percent for wheat, 0.1 percent for barley, 0.1 percent for oats, 0.1 percent for triticale and 0.3 percent for rye. To help visualize the threshold in wheat, approximately five ergot bodies in a one-pound sample can meet this threshold.