5 Takeaways from the 2019 National Strip-Tillage Conference

Cover cropping experiments, the power of earthworms and an economic entry point into the practice were among the highlights of the sixth annual National Strip-Tillage Conference.

2019 has tested the resolve of many farmers. So it was refreshing to experience an overall optimistic environment at the 6th annual National Strip-Tillage Conference in Peoria, Ill. Many of the 338 farmers, researchers and industry professionals assembled with a shared objective of making lemonade out of lemons in 2019, but they also sought opportunities to rebound in 2020.

Throughout the course of seven general session speakers, 12 classroom discussions and 20 roundtables — along with extensive networking opportunities — attendees exchanged ideas and formed new connections as they sought tips for managing profitable strip-till operations.

Cost Savings from Cover Crops. Planting green was a topic of curiosity and conversation among attendees during a roundtable session. The cost savings associated with planting green and using cover crops is a cumulative effect, and growers will see results the following year based on what they have learned from previous years and the inevitable mistakes that will happen.

‘Activate’ Your Soil. There are 8 soil assessments that should be done in the field to determine how healthy your soil is, according to Stephanie McLain, Natural Resource Conservation Service soil health specialist from Indiana.

McLain also recommends that strip-tillers carry a bucket, multiple sizes of knives, a soil thermometer, a sink strainer, cups and an infiltration ring.

Biological activity is the most important soil function diagnostic to review, because 90% of the functions that occur in soil are regulated by soil biology. When assessing soil for biological activity, the first thing to do is to simply make general observations and a count of living things in the soil — fungi, red soil mites, earthworms or beetles. McLain recommends conducting observations and a count of living things either during the spring or fall.

She suggests putting up a pitfall trap to capture insects that go across the top of the soil. Predatory types of insects like beetles and spiders are what strip-tillers want to see in those traps, as predatory insects are not pests.

Strip-Till Smarter, not Harder the First Year. When Kent, Ill., farmer Seth Wenzel started strip-tilling in 2013, he wasn’t in a position to invest in a brand new toolbar, row units or elaborate fertility program. So he bought an old 24-row DB60 bar with Redball strip-till units.

The row units were fairly worn, but in 2019, the rig still performs as intended and they added an NH3 Equaply system to it for anhydrous application. They are only anhydrous in the strip, and they are not applying dry fertilizer.

Wenzel acknowledges that concern over a large initial investment in equipment can have farmers second guessing a switch to strip-till. However, he believes that farmers can be thrifty with some careful shopping. “You don’t have to go out and spend $3,000 per row, plus a new bar to get going,” he says. “Our Case IH bar we bought used for around $12,500 and we added the Ag Leader control system.

“I understand to do strip-till properly, there’s concerns about guidance and RTK and there’s an expense there, but you don’t have to go out and get a huge loan to get started with strip-till. Costs associated with guidance and precision can often add up quickly, Wenzel admits, but for him, they’ve been easy to justify because of savings.

It’s OK to Make Mistakes with Cover Crops. Austin, Minn., strip-tiller Tom Cotter recommends that strip-tillers use all of their senses to examine their soil. Look for structure and worms, feel the structure, listen for roots tearing when plants are pulled up from the soil, and pay attention to whether your livestock are eating the cover crops.

Being flexible, being able to adapt with the cover crop and not being afraid to make mistakes are key for success when planting covers.

Another important consideration when seeding covers is to selecting mixes, Cotter says. “Consider your goals, the land history and future, soil type, climate, livestock, tillage practices, your seed provider and cost,” he says.

Cotter said his covers provided weed suppression right away, and strip-tillers will also see water filtration. “In the winter time, when the snow melts and you get all that ponding, that’s where I get the most out of water filtration,” he adds. “Water holding capacity is the whole principle of covers, and/or no-till or strip-till.”

Simple Math Equals Massive Biological Benefits. Frank Gibbs, former USDA soil scientist and founder of Wetland and Soil Consulting Services (WSCS) in Rawson, Ohio, emphasized the importance of digging into why and how nightcrawlers are “little livestock” that demand a steady diet of biological food to support a strip-tiller’s soil development. 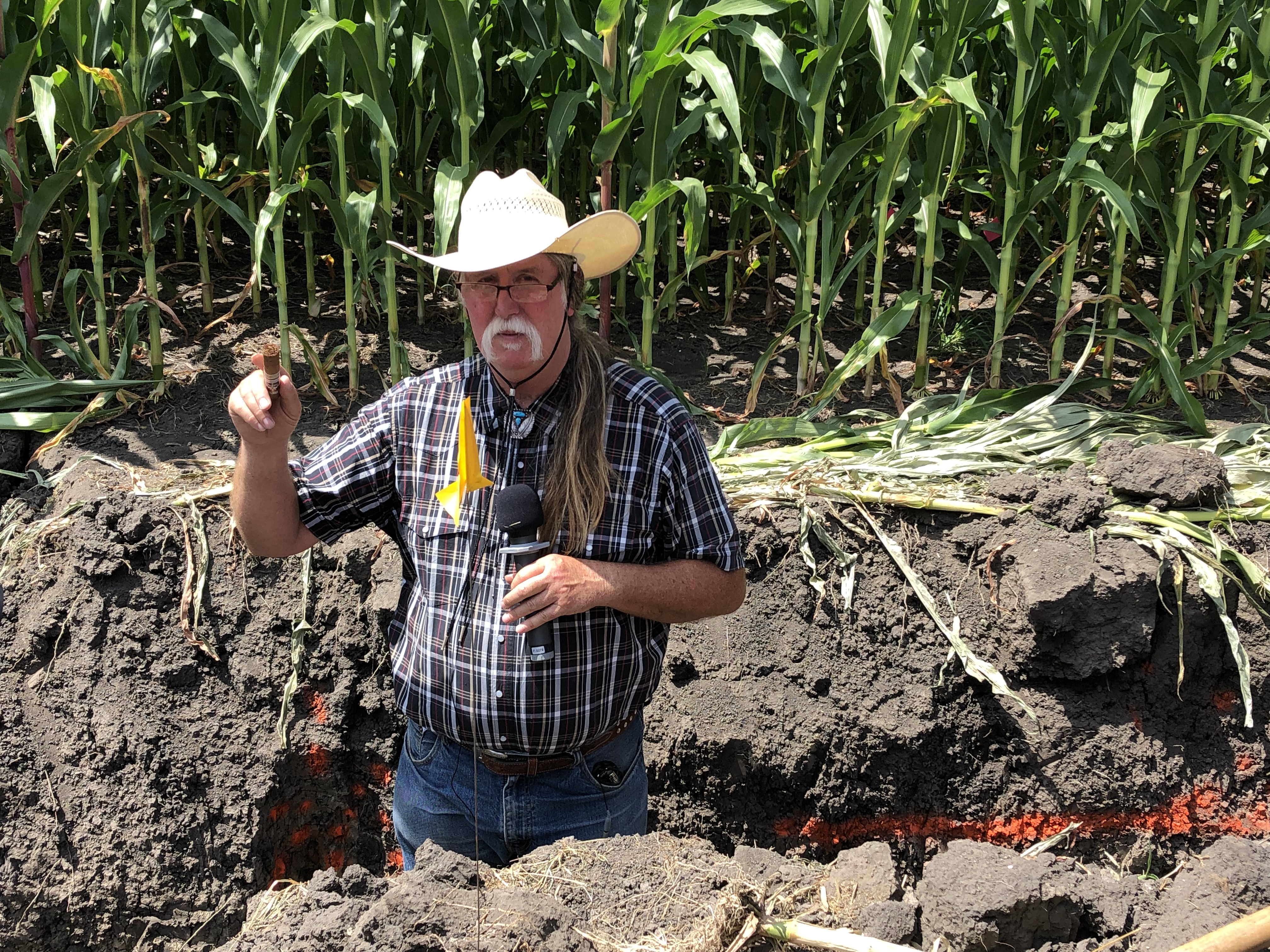 DIGGING IN. Researcher Frank Gibbs took 40 attendees into the field for a post-event demonstration of earthworm activity in a cornfield that has been no-tilled for the last 50 years on host Aaron Ehnle’s farm in Edelstein, Ill. Gibbs calculated that Ehnle had 217,800 wormholes per acre on his farm.

Gibbs took 40 attendees into the field for a post-event demonstration of earthworm activity in a corn field that has been no-tilled for the last 50 years on host Aaron Ehnle’s farm in Edelstein, Ill.

Gibbs highlighted the quantity of middens, or piles of biological material left behind by earthworms, on the soil surface at the demonstration site. “The nightcrawlers pull residue up around their hole to make their own little compost heap,” he explains. “They spit out a slime from their stomach that’s loaded with bacteria, and then they break that cornstalk into fine root hairs which they can eat. The material is then taken underground into the wormholes and coats the sides.”

Gibbs noted that when digging the root pit on Ehnle’s farm to find a section of buried tile, there was a proliferation of corn roots surrounding the tile several feet down into the pit, dotted by numerous wormholes among the roots.

On the surface, Gibbs marked off a 3-square-foot section on the edge of the cornfield and counted 45 middens. Based on the total in that small area, Gibbs figured there are 5 wormholes per square foot. Further calculations based on 43,560 square feet in an acre, Gibbs determined Ehnle had 217,800 holes per acre.

“Those as all probably 6 feet, or at least 4 feet deep, meaning he’s got an underground army helping make his tile function properly,” Gibbs says. “In a wet year like 2019, wouldn’t you rather have holes like that in your soil, versus having it sealed off? That makes a big difference in terms of being able to get that water into the ground, instead of having it run off with your topsoil.”