CHAMPAIGN, Ill. — After exposing more than 70 million grain amaranth seeds to a soil-based herbicide, researchers were not able to find a single herbicide-resistant mutant. Though preliminary, the findings suggest that the mutation rate in amaranth is very low, and that low-level herbicide application contributes little — if anything — to the onset of new mutations conferring resistance, researchers say.

The study is reported in the journal Weed Science. 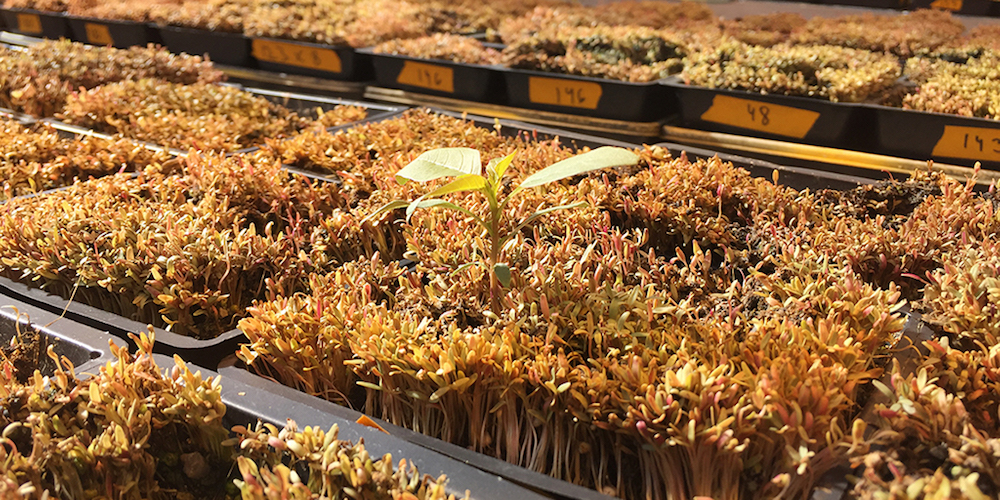 The team tested more than 70 million seeds for spontaneously occurring herbicide resistance. A single seedling in this photo survived the herbicide treatment, but this was the result of a contaminant seed, not a mutation. Photo courtesy Patrick Tranel.

Any major stress that does not kill a plant can contribute to genetic mutations in its seeds and pollen, said University of Illinois crop sciences professor Patrick Tranel, who led the new research. Even the ultraviolet light in sunlight can stress a plant and increase the likelihood of mutations in its offspring, he said. Such mutations increase genetic diversity, which can be useful to a species’ survival.

“Resistance to herbicides comes from genetic variation in a population,” Tranel said. “If an individual weed has the right mutation that allows it to survive a particular herbicide, that individual will survive and pass the trait to its progeny.”

The relative contribution of new mutations to the problem of herbicide resistance is poorly understood, Tranel said. He and his colleagues hoped to determine the baseline mutation rate for a plant of the genus Amaranthus, a group that includes waterhemp, Palmer amaranth and other problematic agricultural weeds. They also wanted to test whether herbicide applications that failed to kill the plant increased that baseline rate. 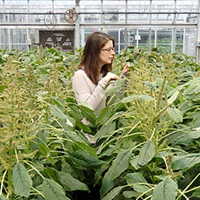 The researchers started with a single seed of Amaranthus hypochondriacus, their test plant, and grew generations of the plant to produce the seeds they needed for their experiments. Photo courtesy of Patrick Tranel.

The researchers started with a single seed of Amaranthus hypochondriacus, which is closely related to several agricultural weeds but is not known to harbor herbicide-resistance genes. Using a greenhouse to isolate their experiments from potential contamination from other Amaranthus species, the team cultivated this one plant, collected its seeds and began the long process of growing generations of related plants and harvesting the seeds. Photo courtesy Patrick Tranel.

“A good plant would produce about 100,000 seeds,” Tranel said. “From this one plant, we eventually got more than 70 million seeds.”

Despite the laboratory’s isolation and the vigilance of the scientists, a few other Amaranthus weed seeds made their way into the experiment.

“These seeds are tiny and cling to things. You can have a seed stuck to your skin and not know it,” Tranel said. “One of the students found a weed seed in his eyebrow after he left the greenhouse.”

Luckily for the scientists, the seeds of the weedy Amaranthus species are black, while their test plants produced only light-colored seeds.

To screen the seeds for herbicide resistance, the researchers spread them over the surface of soil treated with a type of herbicide known as an ALS inhibitor, then waited to see whether any of the seedlings survived. Very few of the test plants overcame the herbicide treatment. Rigorous testing revealed that those rare plants that did survive were the offspring of seeds of weedy amaranth species that already carried the resistance genes. 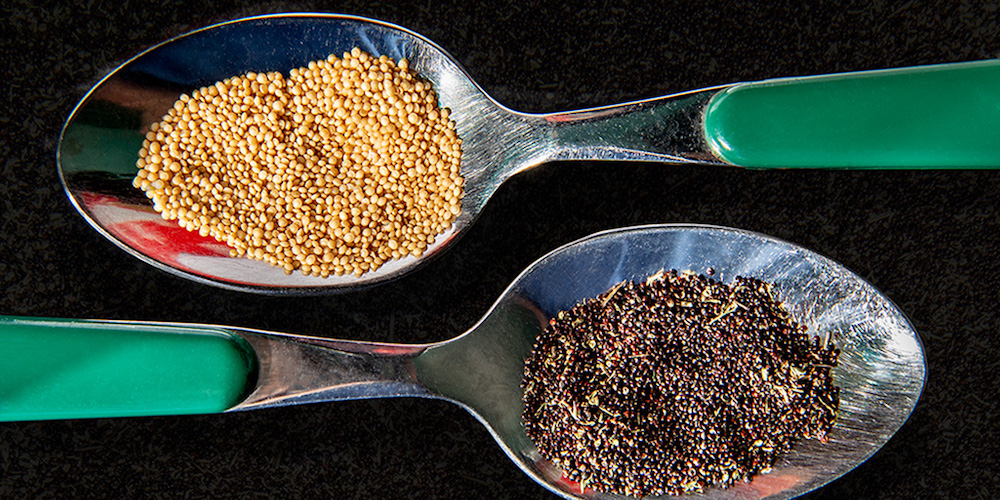 The seeds of the weedy Amaranthus species are black, while the test plants produced only light-colored seeds. This allowed the team to root out contaminant seeds from their experiments. Photo by Fred Zwicky.

The experiments verified that the scientists’ approach worked well for screening vast numbers of seeds. It also established that the team would have to test many more than 70 million seeds to determine the baseline mutation rate in A. hypochondriacus — and to figure out if low-level herbicide treatment increases that rate, Tranel said.

Knowing this is essential to developing models that can accurately predict how plants will behave in a field, he said.

If, as the study suggests, the mutation rate is much lower than expected, it doesn’t mean that herbicide resistance will not occur, he said. “It may be that resistance happens a bit more slowly than previously thought,” he said. “But it will still occur.”