Planting over much of the Midwest is seriously delayed. History suggests the odds have also increased for lower corn yields in 2019 than in 2018, and soybean yields likely will not be exceptional.

Lower yields then potentially lead to very low net incomes. The typical switching from corn to soybean decisions are complicated because of low soybean prices. Prevented planting could come into play on many farms.

Very little planting has occurred over much of the Corn Belt. According to the May 6th Crop Progress report, 23% of the acres were planted in the 18 largest corn-producing states, compared to a 46% average for the last five years. Low percentages exist in all greater Corn Belt states: 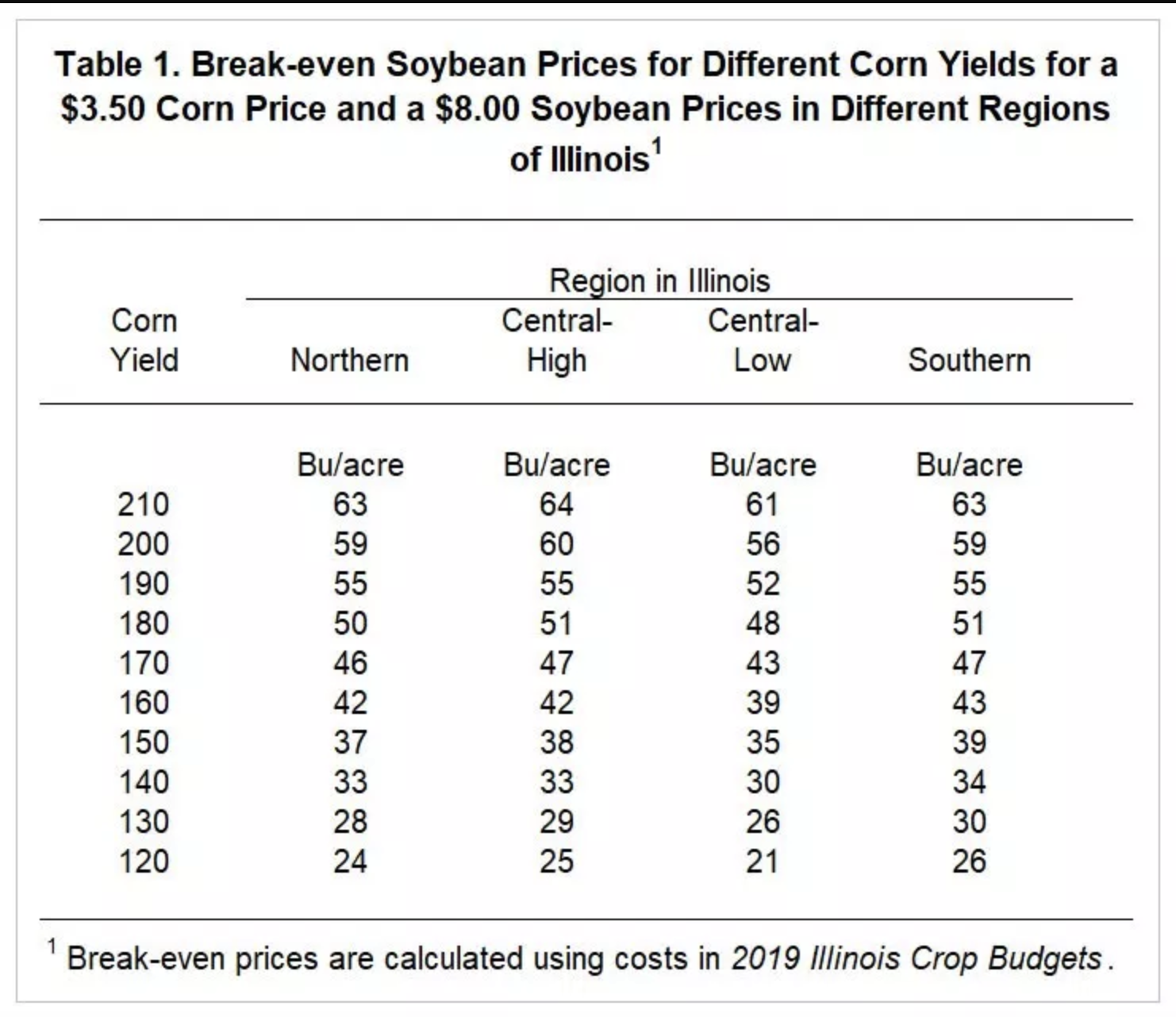 Perhaps the largest impact of late planting will be on 2019 yields. In the past six years, yields have been exceptional across Illinois in particular and the Midwest generally. The higher 2018 yields kept net incomes high enough such that serious declines in liquidity did not occur on many farms.

Very low incomes would result if yields are near trend, and there is not an increase in prices or another round of Market Facilitation Program (MFP) payments.  Commodity program payments, either through Price Loss Coverage (PLC) or Agricultural Risk Coverage (ARC), likely will be important sources of revenue, particularly on soybeans.

As of yet, there has been no positive price response to late planting and, in fact, corn and soybean have declined in recent months. To illustrate, current Chicago Mercantile Exchange (CME) futures prices are below projected prices used to set crop insurance guarantees. For corn and soybeans in Midwest states, projected insurance prices are the average settlement prices of Chicago Mercantile Exchange (CME) contracts during the month of February.

The 2019 projected price of soybeans is $9.54, while the May 6th settlement price is 11% lower at $8.50 per bushel. Soybean prices have declined more than corn. Current cash bids for fall delivery are near $8.00 for soybeans in central Illinois. Sub-$8.00 soybean prices are a real possibility come this fall.

While neither corn nor soybean prices are particularly attractive, soybeans prices appear to have more downside potential (farmdoc daily, May 6, 2019). The prospects of eliminating Chinese tariffs on U.S. soybeans appear to be diminishing. Even if tariffs are resolved, the presence of African Swine Fever (ASF) in China could reduce soybean demand. Both corn and soybean production in South America are higher in 2019 than in 2018.

The strengthening of the U.S. dollar relative to the Brazilian Real and Argentinian Peso further favors South America exports over U.S. exports. Furthermore, soybean prices could further decline if U.S. producers switch significant acres from corn to soybeans due to late planting conditions.

A further complication is the possibility of another Market Facilitation Program (MFP) payments. In 2018, the MFP resulted from the Trump Administration’s desire to compensate farmers for losses due to trade disputes. Payments were $1.65 per bushel for soybeans and $.01 per bushel for corn on 2018 production. A 2019 MFP payment levels could be different than in 2018.

Adding $1.65 to the $8.00 soybean price would lower break-even soybean yields between 6 and 10 bushels per acre for expected corn yields above 150 bushels per acre. The Trump administration has indicated that MFP payments will not occur in 2019. 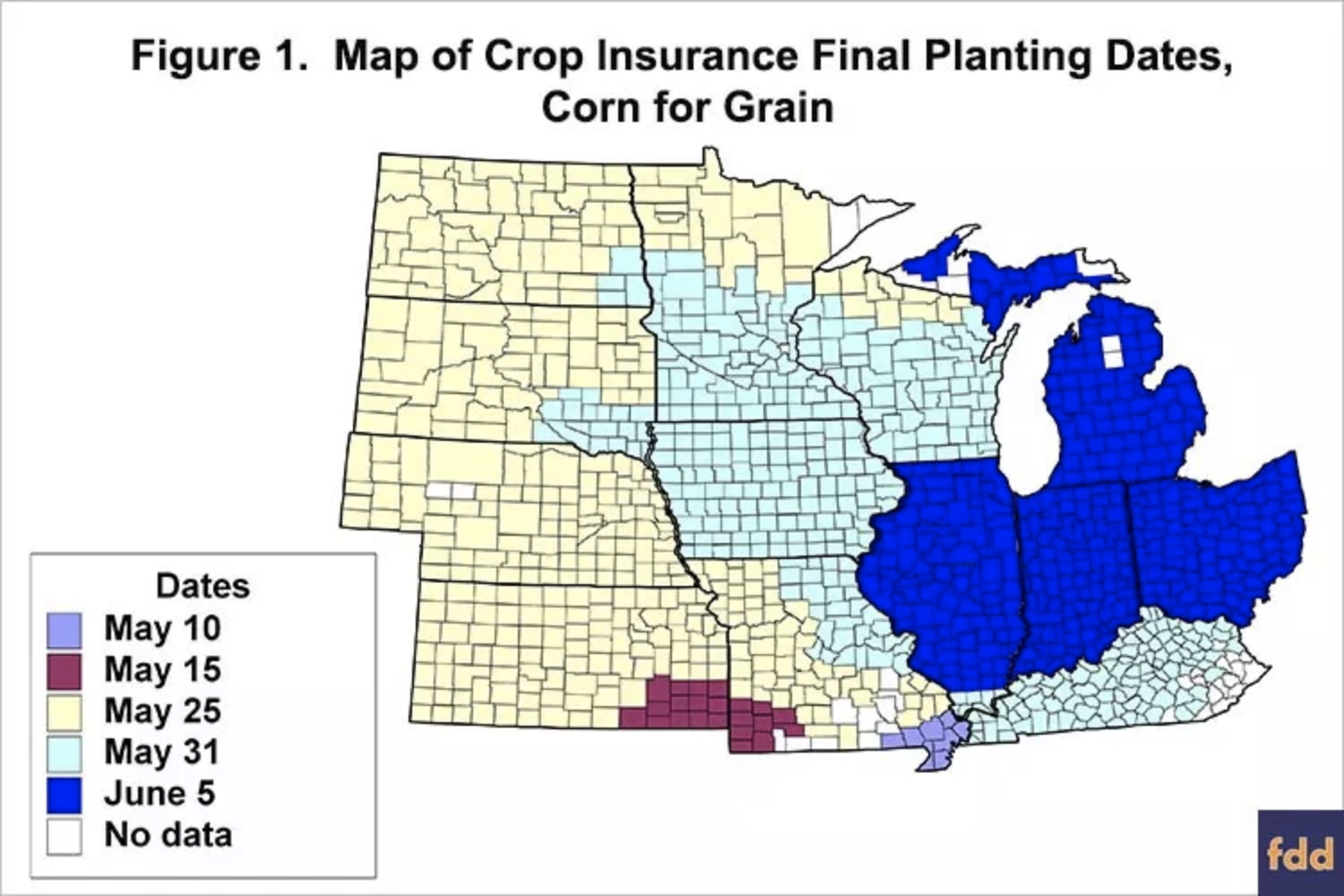 May 31 is the “final planting date” for Iowa, southern Minnesota and Wisconsin, northeastern Missouri, the extreme southern counties of Illinois, and Kentucky. June 5 is the date for most of Illinois, Indiana, Ohio, and Michigan.

Once the final planting date has been reached, a prevented planting payment for corn can be taken if corn is not planted for insurable causes (e.g., wet weather). Unless a 5% buy-up has been purchased, the prevented planting payment will be 55% of the guarantee. Take a unit with a 200 bushels per acre Trend Adjusted — Actual Production History (TA-APH) yield, this year’s projected price of $4.00 per bushel, and an 80% coverage level. 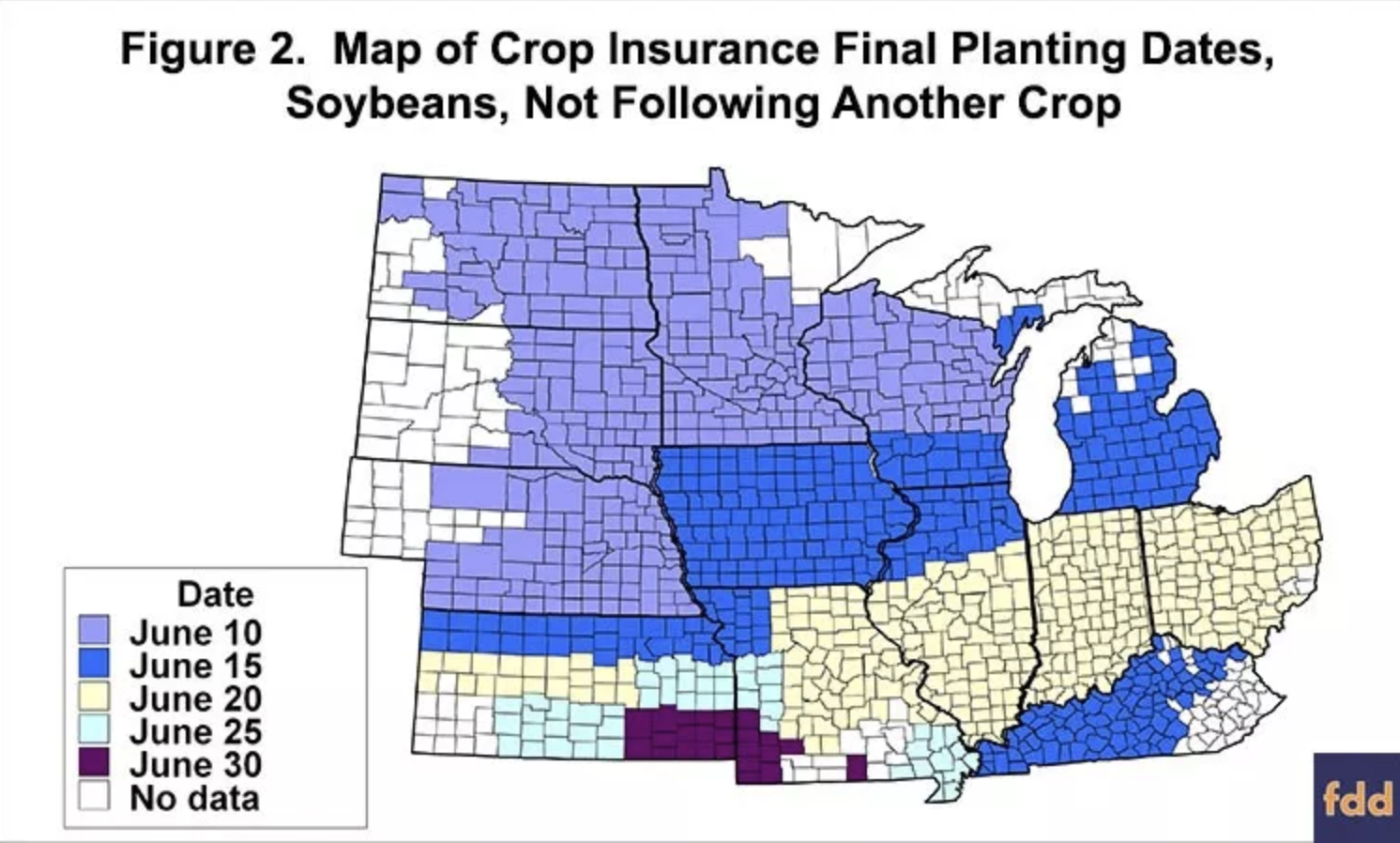 Acres eligible for prevented planting is limited to the number of acres in the insurable unit unless there is a history of double-crop production on that unit.

If the acres in the unit have not increased, the number of acres eligible for a crop equals the maximum acres planted to that crop in the insurable unit over the last four years.

If the acres in the unit have increased, each crop’s prevented planting acres will increase proportionately. Other planting requirements in previous years exist.

Because determining acres eligible for prevented planting is complex, discussing it with a crop insurance agent is recommended.

Three implications exist because of late planting. First, incomes could be very low because exceptional yields are less likely.

Earlier in the year, projections suggested that net incomes on Illinois farms would be negative if yields were at trend, commodity prices did not rise, and a new round of MFP payments did not occur.  Soybean prices are lower now than those used in income projections.  Without exceptional yields, higher prices or a new round of MFP payments will be needed to have positive incomes.

Second, switching decisions to soybeans will be complicated this year because of low soybean prices. Downward pressures on soybeans could increase even more if acres switch from corn to soybeans.