Individuals and organizations that have made significant contributions to the growth and advancement of no-till were honored as No-Till Innovators during the 28th annual National No-Tillage Conference in St. Louis, Mo.

Several hundred people were on hand Wednesday at the Grand Ballroom at Union Station Hotel as the 24th class was introduced with short documentary videos and welcomed on stage to receive their awards from Alpha, Ill., no-tiller Marion Calmer, owner of Calmer Corn Heads and a long-time supporter of NNTC. No-Till Farmer senior editor John Dobberstein joined them in the award presentation.

“Calmer Corn Heads is very proud sponsor this year’s awards. We appreciate the opportunity to honor the important achievements of these amazing No-Till Innovator Award winners,” says Marion Calmer, a no-tiller from Alpha, Ill., and owner of Calmer Corn Heads.

“We’d like to commend each of this year’s winners for their priceless contributions in promoting the growth of no-till practices across the U.S. and globally — leading both by example and with the valuable industry knowledge and information they bring to the table,” Dobberstein says.

“We’d also like to sincerely thank Marion Calmer and Calmer Corn Heads for stepping up to support the No-Till Innovator Awards program with their sponsorship, helping to ensure worthy individuals and organizations continue to be honored into the future.”

The 24th class of No-Till Innovators recognized for 2019 include: 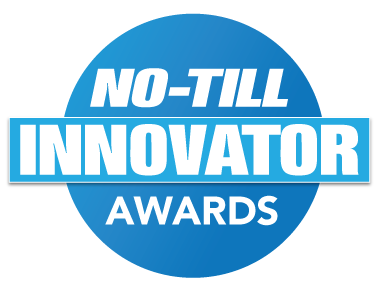 For more information on the winners, click here for an in-depth article that appeared in the February 2020 edition of No-Till Farmer’s Conservation Tillage Guide.

The 2019 winners were chosen based on their commitment to the advancement of no-till farming. The 24th class was selected by a committee of leaders who represent different aspects of the no-till industry.

The award recipients received complimentary registration and lodging from Calmer Corn Heads for the duration of the National No-Tillage Conference, as well as a special memento to commemorate the honor.

The nomination process is already under way for the 25th class of No-Till Innovators, who will be recognized at the 29th annual National No-Tillage Conference in Indianapolis, Jan. 12-15, 2021.

Nominations Now Being Accepted For 18th Class of No-Till Innovators